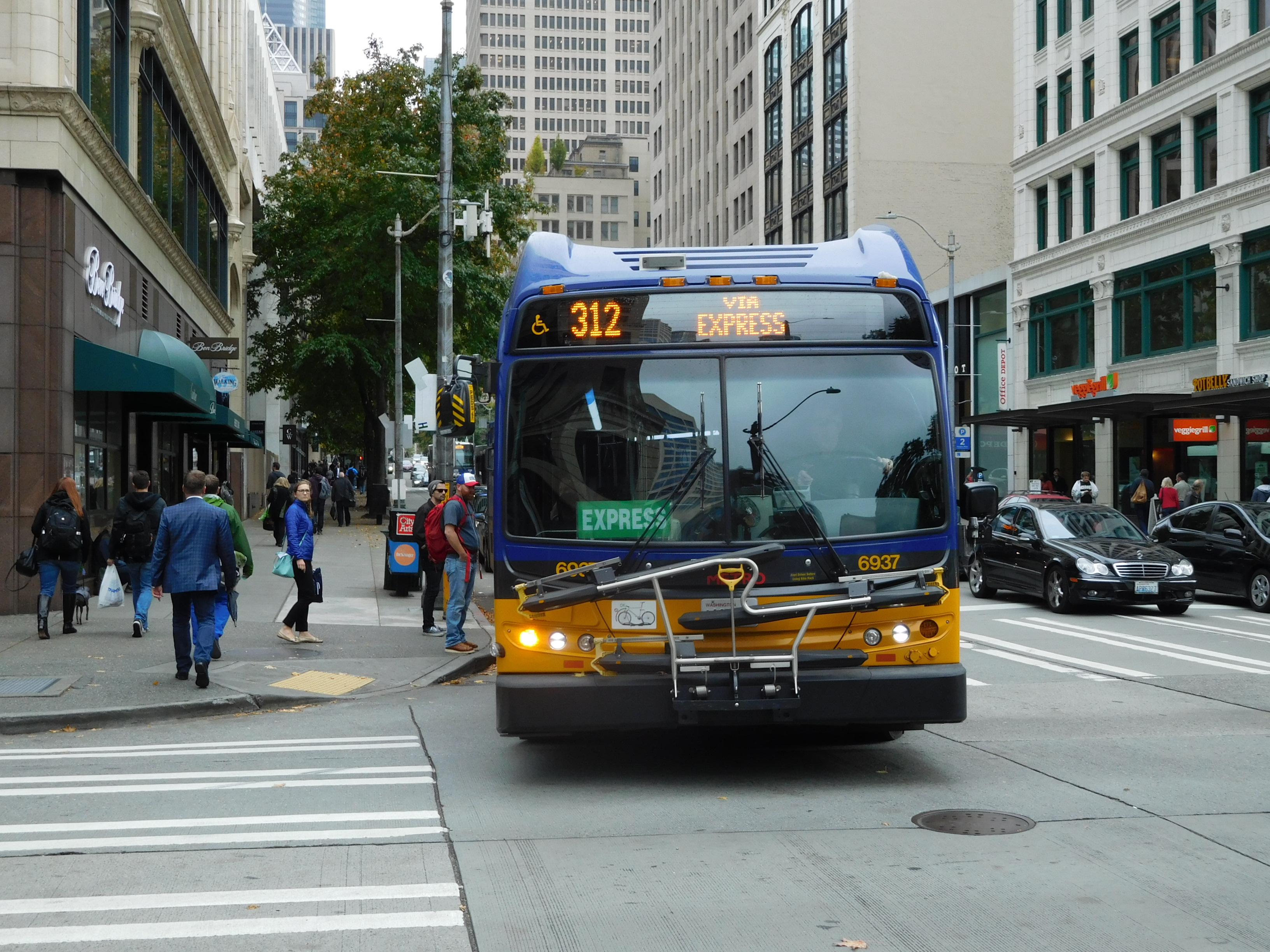 On Thursday, night the University of Washington hosted a lively panel discussion on Seattle’s infamous traffic woes. Organized by The Seattle Times, four experts on transportation debated various solutions for agonizing commutes and how emerging technology will change the way we travel. Many of the ideas aired are nothing new to readers of the blog, but some of the evening’s comments and questions show that change in transportation will continue to be a slow and steady process.

The panelists came from a variety of backgrounds: Scott Kubly, Director of the Seattle Department of Transportation (SDOT); Jarrett Walker, consultant behind the Human Transit blog; Mark Hallenbeck, transportation researcher at the UW; and Bryan Mistele, co-founder of traffic data firm INRIX.

Times journalist and moderator Thanh Tan kept the discussion going at an energetic pace, but some of her questions seemed to stem from her position on the paper’s editorial board and an effort to fuel controversy. For instance, she asked if the Move Seattle transportation levy is too big and whether the city will be held accountable, an opinion held by the Times’ editorial board that has been thoroughly debunked. And she asked twice about rechannelizing city streets, though Kubly satisfactorily answered the question the first time by citing data on improved safety and efficiency.

Other comments by the panelists were much more intriguing. One of the first questions asked what is making Seattle workers have some of the longest commutes in the country. The typical answers were economic growth and limited geography, but Hallenbeck pointed out something that most of the audience may not have considered: at some point, every major city in the world runs out of street space faster than the growth in transportation demand. Cars take up a lot of space for the small amount of people they move. As a matter of functional necessity, big cities have to dedicate street space to ways that move people more efficiently.

Walker offered an analogy, explaining that the United States manages its transportation system like the Soviet Union managed its grocery stores: by setting the price of bread too low, there wasn’t enough bread to go around and the bakers weren’t interested in making more. In other words, if travelers paid the true cost of transportation, alternatives to driving alone on subsidized freeways using cheap gas would be much more attractive in urban areas.

The panelists stressed that there are are vast differences between the solutions that make sense in Downtown Seattle and what works for outlying neighborhoods and suburban communities. In the suburbs, the vast distances between land uses simply make driving the best option.

In cities, investing in a diverse ecosystem of modes makes sense because urbanites have so many different needs and situations. But downtowns and the exurbs aren’t always at odds. Walker cited Germany, an automobile powerhouse with many manufacturers and infrastructure like the Autobahn, that also has outstanding urban transit.

Suburban communities are seeing increased pressure to support transit, however, because of the suburbinization of poverty. Low-income people are moving to the suburbs because housing is more affordable there than the inner cities, but smaller jurisdictions lack the infrastructure social support services that poor families rely on.

Looking ahead, Mistele predicted that fully autonomous vehicles will be available to typical consumers within the next decade. He touted the technology as a way to increase capacity on freeways and reduce congestion in urban downtowns, where some 30 percent of traffic is circling to look for parking.

Walker and Hallenbeck pushed back, though, saying that driverless cars will still be costly because they have to park somewhere and could make additional trips without passengers that may not otherwise happen. Walker said simple geometry makes the transportation benefit of driverless cars a moot point: they will still take up much more physical space on city streets than people walking, bicycling, or taking transit. But he did say there is no reason we can’t have driverless buses, which could vastly increase the amount of funding for transit service by eliminating a significant portion of labor costs.

When pressed on more specific local ideas Hallenbeck said Washington State is considering converting the Interstate 5 express lanes to permanent two-way operation. He would favor making them operate similarly to the new I-405 express toll lanes to ensure transit is reliable during peak periods. Kubly announced that Seattle will soon be undertaking the nation’s first municipal shared-use mobility study to see how services like car2go and Lyft can better integrate with the transportation network. He also noted that since Seattle voters approved increase transit funding, service has increased 15 percent and is now caught up with the growth in demand. He hopes for further improvements like off-board fare payment and better enforcement of transit lanes to make buses more reliable.

Walker noted that the type of vehicles used shouldn’t matter: good urban transit systems need both buses and trains. He noted that the two modes are nearly identical, except for some reason we prefer to move things out of the way for trains and not buses. Bus rapid transit can be a cheaper alternative to rail.

Mistele said he was skeptical of light rail, saying that traffic has not improved on the Interstate 5 corridor since Central Link opened between downtown and the airport. But that misses the point that Link has a great many purposes besides letting people bypass congestion, not the least of which is to breath new life into neglected South Seattle neighborhoods. Walker also countered that rail is a long term investment that may take decades to fully realize the benefits. Private development will eventually build up around stations and people will become more familiar with the system over time, encouraging greater use. Indeed, transit-oriented-development is key to improving mobility throughout the region.

The event was a small sampling of the larger public discussions around transportation choices and funding that Seattle is having right now. For the transportation wonks in the room there wasn’t much new to be heard, but others were exposed to alternative ideas and why the Puget Sound region needs to explore the full range of options. As one of the nation’s fastest growing cities Seattle must continue to make the tough decisions that make getting around easier for everyone.