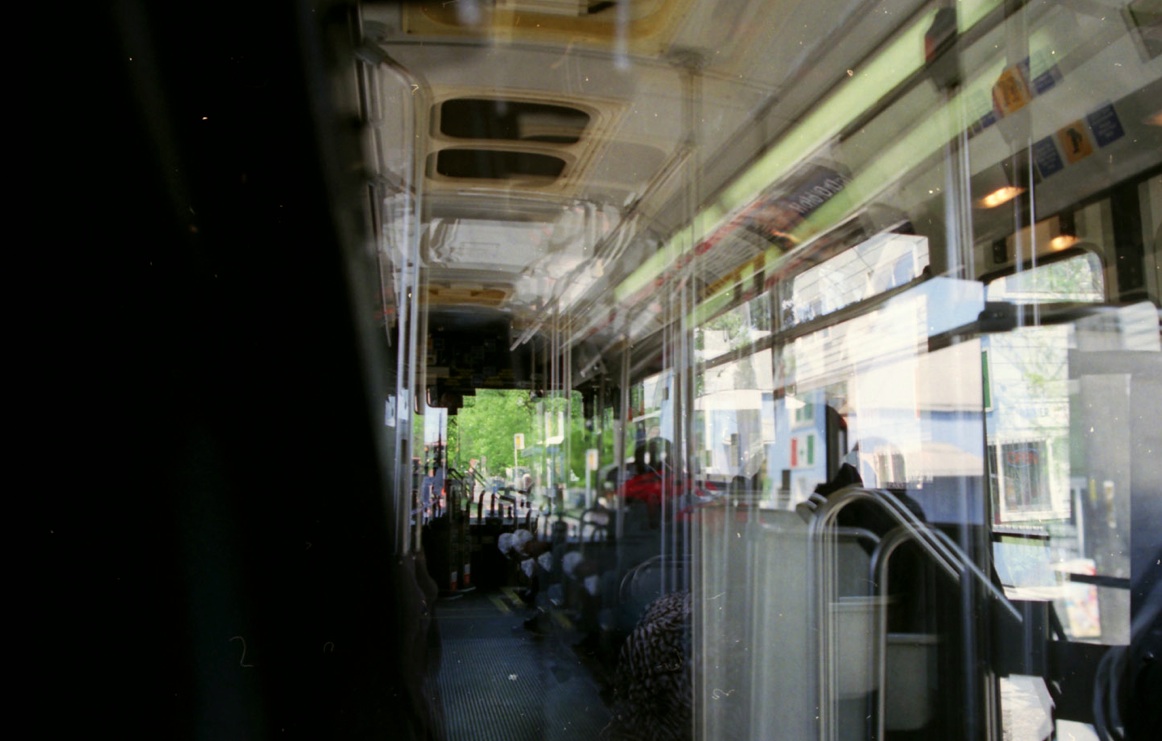 The night was silent. We ambled forward together, a mobile living room, lightly populated with benevolent strangers. Nothing but the gentle hum of the bus’s electric current. People sitting alone, nursing their own thoughts.

Then out of the silence, like cymbals crashing after a mellow adagio, I hear an ear-splitting stentorian roar:
“DRIVER DO YOU LIKE DONALD TRUMP?”

So inquired the great Mr. Weyling (read more here and here). In retrospect, it’s strange he’d been quiet up until that point. Maybe he’d belatedly realized he was out of character, and felt the need to set things right. This funereal silence just won’t do. Time for some classic Weyling.

I responded in a normal, easygoing voice: “Um, we’re not gonna talk about politics on the bus tonight.”
“OKAY,” he boomed.
“Yeah, we’re gonna keep that to ourselves.” Talking to him, and to myself.
“OKAY. I’LL KEEP IT A SECRET WHO I’M VOTING FOR.”
“Thanks, man.”

Weyling’s wailing is like no one else’s. He might be my favorite shouting person to listen to. Yes, the list is short, but he’s at the top! His diction is precise, Christoph Waltz’s, and unhurried, like Jason Robards’.

The difference, as I’ve mentioned before, is volume.

Kakapo parrots and Blue Whales have nothing on this guy. Reader, I’m not making fun at his expense. He possesses a truthfulness of being not everyone has, and I stand by my earlier words, wherein I saw in him “an uncomplicated passion I find oddly adorable.” There’s something of the child in him, direct, and that I admire.

Plus, well, doesn’t all this make the evening more exciting? His line above was reeled off slowly, and the effect was unique; we’re accustomed to yelled declarations that carry significant meaning or emotion. We expect them to be said quickly and heatedly. Less ordinary is hearing thunderous levels applied to highly innocuous statements of no great emotional import. I couldn’t not smile.

I recall a moment strolling down Third Avenue some weeks ago. Mr. Weyling was a bit ahead of me, his short, compact figure bobbing up down amongst the dense crowd– we as a city were impersonating a packed New York sidewalk. His hunched shoulders, furrowed brow, and italicized forward momentum were the very picture of determination. He stood out from the others in that he was giving himself some positive self-talk– something I hope we all do, but he was unique in not exactly keeping it to himself. Repeatedly, he would bellow out, “TRY TO TELL ME I CAN’T? I THINK I CAAANNNNN! TRY TO TELL ME I CAN’T? I THINK I CAAAANNNN!” He howled it to the skyscrapers with malicious glee, practically shaking glass, flattening imaginary antagonists with each step. Nothing wrong with a little self-confidence, I thought.

“I LIKE YOU AS A DRIVER,” he slowly screamed, if a raspy bass voice can scream. “YOU’RE A NICE GUY.”
“I try.”
“I’LL TELL YOU WHO I WANNA BE LIKE.” He paused dramatically. Let’s take a moment and consider his use of “wanna.” Contractions are used to accelerate delivery. Nobody says “wanna” slowly… ah, but Mr. Weyling isn’t just anyone. He’s Mr. Weyling. Don’t you love this guy? He wrapped up his dramatic pause by concluding with the exclamation, “MY FATHER.”
I was about to say something admiring, something about it’s nice to have good parents one can respect, but he bulldozed in with, “HE’S OVER SIXTY FIVE YEARS OLD, AND HE’S STILL WORKING.”
“Really!”

At this point he stood. Which made sense. There was no other way to emphasize his upcoming point: he was already bellowing. He was already emphasizing each word. What else can you do? The only thing left to do is rise!

He’s Dr. King at the Lincoln Memorial. He’s Patrick Henry at the Virginia Convention. He threw his hands in the air and turned his face to the skies. Sleepers and thugs alike seated nearby looked up groggily, utterly flummoxed. What were they to do with this great fulminating vision in front of them, this avalanche of friendly and deafening vehemence?

“HE’S NOT GONNA STOP WORKING, UNTIL HE FEELS LIKE STOPPING WORKING!”
“Uh huh, he likes to work?” My normal voice sounded like a puny pipsqueak compared to his.
“HE’S OVER SIXTY-FIVE YEARS OLD! I WANNA BE LIKE THAT.” Who else says ‘wanna’ as such a deliciously slow, perfectly enunciated detonation? “I MAY NOT MAKE IT, BUT I’M NOT GONNA GIVE UP.” Goh-nnuh.
“Don’t give up!”
“I COULD GIVE UP, BUT I’M NOT GONNA!”

Personally, I find something beautiful about his complete lack of irony. In an age when everything needs to have a layer of hipper-than-thou ennui, he is sincere. He wants to follow in the footsteps of his father, and says so. With unremitting gusto.

Shortly thereafter he deboarded, but just because the bus was driving away and he was no longer nearby didn’t mean I couldn’t still hear him perfectly. His half-a-block-away bellow read now as an ordinary voice right beside me. It said, “I aspire to my father.”

I was reminded of the great Novalis quote, where he writes, “I am always going home, always to my father’s house.”

My philosophical reverie was shaken by further Weyling. He had other pertinent information he needed to share. I was all ears.

“I PUT ON COLOGNE!” he screamed, with the urgency of an untamed drill sergeant. “A LITTLE DAB HERE, AND A LITTLE DAB THERE!”