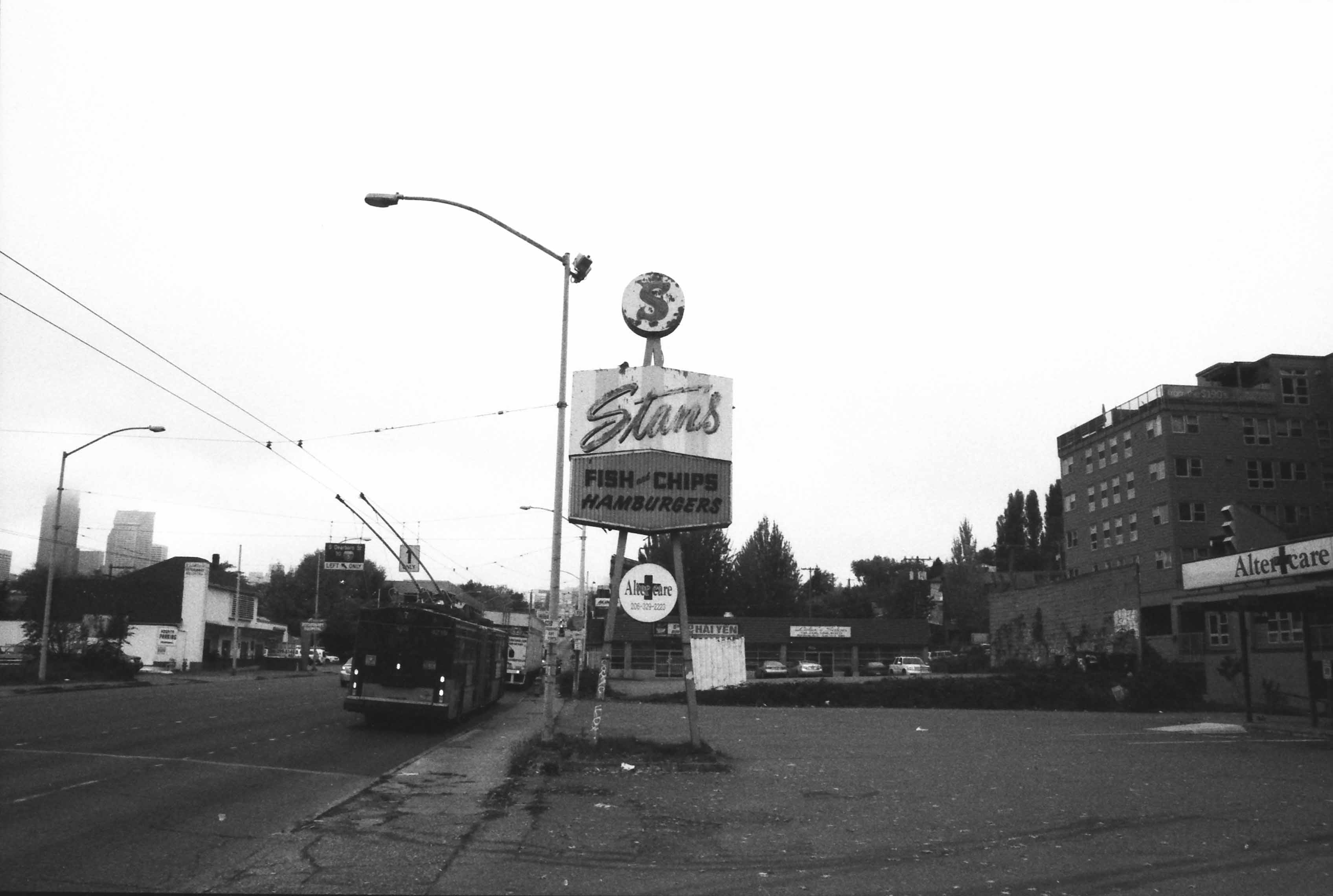 Blue sweatshirt, flat forehead. It was the last time I ever saw him, a street character I encountered not infrequently on my Rainier Avenue route; not homeless, you understand, just scruffy. I liked saying his name. He was the definition of boisterous, and he talked way too loudly, but I didn’t mind. He was a sweetheart when you got right down to it, and always reacted well when I called out: “inside voice, Little Leon, inside voice!”

This morning both of us were strangers in a strange land. I can’t remember why I was driving the 70 at seven A.M., and I know I’d never seen him out in Amazon tech-head land before–definitely not at the crack of dawn. What were we doing out here? Why was I out of bed? He was more of an evenings-on-Rainier type of guy. Like me. But the day was beautiful in its own quiet way, one of those cloudy Northwest mornings, the brightening grey that blurs the moments before dawn and afterward.

Even as I said it, I could tell something was different. His eyes were more than sober; they were shell-shocked.

“Hey, man, what’s goin’ on,” he mumbled, his eyes trained on an invisible distance far beyond the material. He stumbled into the front seat. On the old buses, that was right next to me, the driver. The intimacy of it felt appropriate for our conversation, though given Little Leon’s volume habits, everyone in the sparsely populated interior was surely within earshot. Somberly: “hey, guess what.”
“Tell me,” I said.
“My mother died last night.”
“I’m sorry!”

I looked at the moistness of his eyes, two deep brown pooling wells. There was something wrong with this day, something particular that had never been wrong before. His hush following the sentence spoke louder than any scream. We’re all of us going through this life for the very first time. We’re beginners in this racket, and we have no experience for something so new, so large and silent and terrible.

I’m sorry to hear it. What an enormously forgettable phrase. People who have lost know how meaningless it is. But what can you say? Sure, it’s overused, but the sympathy is real. You have to say it. You want to say it, and you mean it. I did. I meant every syllable.

Little Leon, a thin-framed broken man, African-American, too early to middle age, today clad in a blue sweatshirt, blue jeans, and battered white sneakers. Survival already trumps style for many of my street-denizen friends, but for Mr. Leon today, as would be the case for any of us, fashion was especially meaningless. He sat as a man consumed entirely by the past, the present an afterthought too bitter to bear.

There’s a film that’s special to me–I won’t spill the title because I’m giving away the ending– about a man who slowly loses everything, including his life… but not his dignity. I’ve always remembered that, and I voiced it now.

“We gotta go with dignity.”
“Dignity, that’s right. And she did, she was beautiful right up until the end. It just hurts,”
“Aaat’s heavy,
“It hurts ’cause I was uh only child.”
“You and me both!”

Little Leon leaned forward. He meant every word he said.

“Hey, lemme ask you a favor, king bus driver. By the way this guy’s the best king bus driver in all the whole a Metro. He’s he’s he’s,”
“Nawwww,”
“There ain’t nobody else, cause every single time he sees me, he treats me the way he would wanna be treated.”
“Thanks, man. I try!”
“You do. But lissen, I got to ask you one favor.”
“What’s up?”
“Just, next time you see your mom, just give her a big hug, man, hug her tight. Don’t matter what she’s doin’, she’s comin’ outta the bathroom, hug her anyway.”
“I will. I will.”
“It hurts.”
“I’m glad you got to spend time wit’ her.”
“Oh yeah, my mama raised me. My dad, I never met him.” The raspy inflection, halfway between tears and a hard place, the plaintive voice rising, helpless: “I tell you, when I make it to those pearly gates I’ma ask him just one thing.” Trying not to shake. “I’ma ask him why he was never around, why he was never there, so I coulda maybe learned something from him.” His voice cracked, and cracked again.
“Oh man, Leon. I’m sorry.”
“It hurts.”
“Death is so huge.”
“Just hits the bottom of your soul.”
“We’re gonna lose everything we love in this life,” I said, half to myself, gazing out at Mercer Street, reflecting as we waited out the long light.

“Well, we won’t lose it, it’ll just… you know, king bus driver, I saw somethin’ a long time ago that I couldn’t believe. I saw this guy just bawling. Just heaving, cryin’ and cryin’. I said why and he said he’d just lost his wife.”
“I don’t blame him.”
“Oh no me neither. But I didn’t know grown men cried. But he was. I mean, it was his wife! Ain’t no girlfriend… so that’s why I’m cryin’ now, I understand.”
“‘It’s like you lose one person and the whole world seems empty,'” I replied. That’s from Joan Didion. Joan Didion, Little Leon… doesn’t matter what world you come from. This stuff is all the same.
“Yeah,” he agreed. “Exactly. Yeah.”

He paused. He spoke. He told me he was writing a song in anticipation of the funeral, at which he planned to sing. “I ain’t done with it, but the first part goes like this.”

And then he launched into it. Reader, would that you were there. A century and a half of the gospel blues tradition had existed for the purpose of building to this moment, a broken man on a city bus singing to his friend. To hear his deep, sorrow-stricken, gospel-inflected voice… this was a blues with no affectation whatsoever. It was shattering in its heartrending truthfulness. Was I really going to tell him to quiet down now? Did I care what the other commuters thought about their morning trip to work?

Not for a second. They one day will be where he is, and we’ll give them room then, too.

I couldn’t help but consider myself in his shoes. “I don’t know if I’ll be able to handle it,” I said.
“What?”
“Oh, when my my own mom passes, I’s thinkin’ I don’t know if I’ll make it.”
“Well, don’t rush it, man. That’s pain.”
“You know though,” I said after another pause, “it’s better than the opposite. This is better than us dying before our parents do. Ain’t nothin’ worse than a parent losing their only child.”
“Yeah. Yeah, that’s true. Yeah.”
“This is part of the cycle.”

I could see he was noticeably buoyed by this idea. Mourning happens in waves: a step forward, and three back. Though they may seem as nothing more than drops of water in an ocean, every one of those incremental steps forward is a milestone. This was a step forward, and it was just what he needed then. As we came to his stop, he exclaimed, “iss a reason I ran into you this morning, king bus driver!”
“I’m so happy you got on my bus, Little Leon!”
“You’re tellin’ me! Love you, be safe!”
“You too!”

I watched him walk away, a man in blue, shivering in the wind. He wasn’t Little Leon anymore. He was just Leon now, and his grief will be our grief, has been our grief. Do we lose everything we love in this life? We do, except we don’t lose their spirit. We don’t lose the good they built in us, which is the most important part. In your good actions, the grace or humor you learned from them… that’s them, reaching out at life through you, with you.