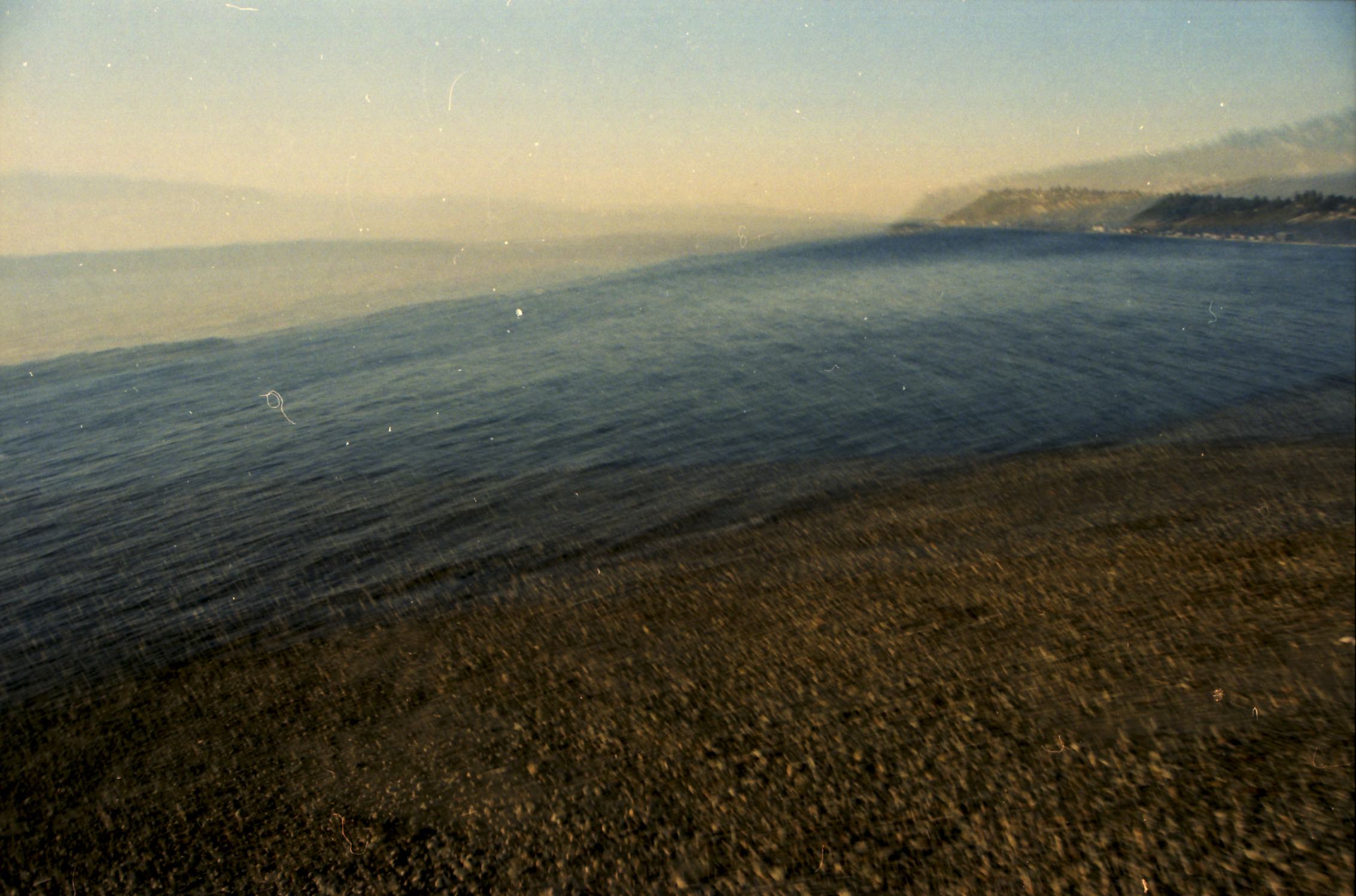 Stories come out slowly sometimes, awkwardly. They belch and burp their way forth. This young man approached from the bus’s crowded interior with a hesitance, standing by me as I drove, no reason given. I thought he was about to jump off. He wasn’t. He just watched me, keeping to the side, while I greeted and fared the people well, wrapping the wheel around the corners, accents and smiles bouncing off me as I registered his gaze beside me. What was he thinking, beneath that knit beanie? Behind the dirty off-gray sweatshirt with the high school logo, the army camo fatigues tied round at the bottom, the better to display his basketball socks and shoes? Finally I just went for it.

“How’s it been goin’?”
“Iss coo’,” he replied, in a monotone I took to be standard-issue emotionless male adolescent, but which quickly revealed itself to be something more. “I was just in this accident though. The driver died.”
“Aoouuugh,” I said. He was young. Should a high-schooler know the face of death this well? “I’m so sorry. Somebody you knew?”

I wasn’t looking at his face, but it felt like I was, hearing the naked grit in his voice: “mah best friend.”
“Aaaooo,” I moaned again. “I am so sorry. I know how that feels.”
“And he was a good guy too, he had a job, just turned twenty-six. He the type a guy he’d give you his last five dollars, you know?”

​I breathed in, feeling the words travel down, the memories behind them, as they slid to the pit of my stomach. Let yourself go there, I thought. A positive worldview should be able to tolerate anything. What is optimism? Optimism is being comfortable looking at truth, even if it’s negative. I don’t understand how this place works, but I like living here. Life may be unfair, but people don’t have to be. What are we here for, if not to help our fellow man through a spot of hardship? I felt his burden too, and tried to share it with words.

“Oh my gosh, that’s heavy,” I said. “I know what you mean though. It’s the best people I know, that die young. I don’t understand it.”
“Yeah.”
“I guess all we can do is keep that person’s good spirit alive, let ‘em live through our actions.” I meant it, but it sounded false, the comforts you’re not ready to hear in the days after.

We were facing the mystery around which religions are built, ideologies and philosophies, the one question no amount of millennia can conclusively answer: why do bad things happen to good people? It’s the humanized condensation of yet a larger query. You’ve asked it even if you don’t think you have. Why does order in the universe seem present sometimes and absent at others? Most human thought stems from this question, and it is our nature to ask it, no matter how smartly the ol’ Universe keeps its secrets. We know we can never know, are not allowed to know, and yet…. Sure, he was a husky macho man of a teenager, but I knew the question lived in his mind also. The doubt.

“Yeah, ‘cause I used to think you know when I was little, if you’re a good person, then you’re gonna live a long time. And it just ain’t true. At all.”
“It’s almost like it’s the opposite,” he murmured.
“Or something.”

Do actions have consequences?

Maybe it’s not about consequences. Maybe it’s acting qua acting, for the sake of itself, how it makes you feel… for the good it does yourself and others. Maybe that is its own reward. I mused: “the thing is, I still wanna be a good dude. Even if I don’t live a long time, I wanna feel good about the stuff I do in this life, you know?”
“Yeah. I think it’s like God givin’ me a second chance.”
“Yeah, an opportunity.” I looked at his cast. “How’s your hand?”

He mentioned pain pills, numbness, two more months of the cast. I said something about how that’s better than a wheelchair. He said yeah. He opened up as the bus emptied out; just us now.

There were three others in the car, he explained. His best friend, his girlfriend, and his best friend’s girlfriend. One girl broke both her legs, and the other her ribs. His friend the driver gone. It went unspoken who made out the best. Our friend’s lasting problem is not a physical injury but a psychological one, a roiling storm he will likely never manage to convey to others who haven’t also experienced similar catastrophes. He will know the force of the questions above with a slamming weight unique to him, and the resulting loneliness will inform his every thought and action to a degree even he won’t be able to wrap his mind around. It will be this haze, the invisible suffering that gives him the long view, but keeps him forever distant.

There is a type of grief where you have no tears left. You can’t cry; you’ve run out. It sounds like you don’t care, but you’re just hoarse from a passion too big for your voice. That’s where our boy was. We were at the terminal, standing outside the bus now. I listened as he reflected. “They were going to the Paradise Restaurant. Just goin’ to get something to eat. I guess he went to the real paradise.” Pause. “And he was just twenty-six, such a good guy. Like ah said, he the type he’d give you his last five dollars if you needed it.”
“That’s such a good age too, I mean you’re all done with school, you’re a new adult finally doing something with your life, got all kinds a possibilities…”
“Dude, yeah. Man, I have nightmares every night. We used to see each other every day. Now, it’s like this…?”

There’s not much you can say after that. We ended on a note of God bless, genuine thankfulness at being alive. I watched him stalk away, another young man in a beanie, doing his best at the extraordinary challenge and seemingly nigh-impossible game we call Living Life.

What cures you from the knowledge of the shape of the Void? What pulls you back? Will there be a day with enough hindsight behind it, when a sunrise is a sunrise again, and the questions don’t need answers anymore?

​One day, he will know. And I think he will smile.

It shouldn’t be a pattern, but for whatever reason it’s getting to be one. Other stories involving African-American men and myself wrestling with shattering personal loss here, here, here, and here.