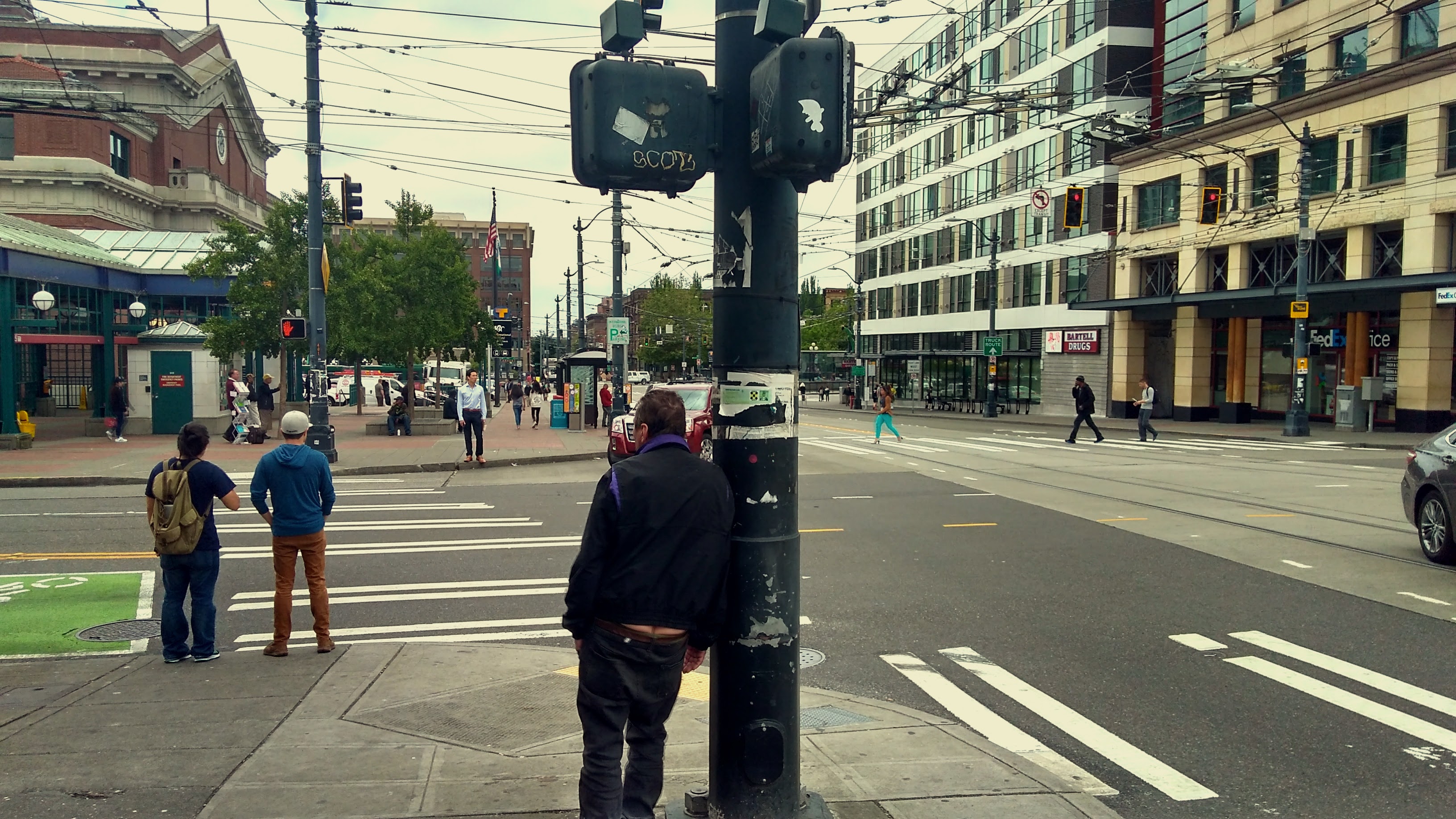 Ah, Fifth and Jackson. There I was, crossing over to Hangout One (click here for a detailed ethnography of all four corners of the infamous intersection). Hangout One has been vacant of late. With the waterfront streetcar steps chained now off from access, there are still places to urinate, but nowhere to sit. Good thing there’s three other corners to choose from. Hangout One beckons me today not for lavatorial reasons but because it’s the corner I need to be on to begin my evening shift. My bus’ll be here any minute.

The corner is deserted as usual for this time of day, save for one soul: the middle-aged Laotian man squatting back against a pillar. I’ve been saying hi to him for at least a half-decade. He taught me the traditional Laotian greeting years ago: hands together as in prayer, a head nod down, and the word, “sabadi!”

I greet him just so, and he smiles in return. There are a few teeth left, and his silver-grey strands toss lightly about, almost as if underwater. His appearance is a medley of amenable grit and texture, jeans torn not from fashion but use, blemished surfaces and split ends, that olive-skinned grin somehow sustaining through it all. What is he doing out here? The maxim of homeless Asian people being nonexistent isn’t entirely true, but you’ll agree there’s a reason for the adage. It’s rare. He mostly keeps to himself, a quiet sort who doesn’t fit in quite with Hangout Three’s obstreperous bawdiness. He has a gentle smile for me every time I see him.

Today though, I get more than a grin. He rises and walks toward me, one arm held out, trying to thrust three one-dollar bills into my hands. “Here, for you,” he says.
“What? No, my friend, no way! You need that way more, I think!” I have to put some effort into turning his gift away. “Thank you though, that’s really nice!”

He explains how his brother has just won the lottery, and that the whole family will share. He’s thrilled, and feeling generous. We talk about the details. I want to make certain his brother knows how to find him; really did win; really will share. It all seems to check out, but for now our friend is happy, and maybe that’s the most important thing.

A family is approaching from across the street, coming closer now. European, dressed in relaxed casual, a mother with short hair pushing a stroller, with another toddler alongside holding father’s hand. Perhaps they’re tourists.

Our friend moves quickly toward the stroller. He extends a filthy loving hand as he did to me a moment ago, holding out the three dollars to the toddler inside. He is smiling, nodding: “here! For you!” The mother is shaking her head, “no, no, no,” confused, scared. For her it is all happening quickly. The father doesn’t notice; he’s walking ahead. The baby doesn’t understand what’s happening either, but accepts the proffered bills.

Giving. Why does it feel so much better than receiving? I knew the sort of high Mr. Sabadi was on. It didn’t much matter to him how they responded. He just wanted to give, and was searching for the most worthy recipient in sight. Of course it was the child.

Afterwards he turned back to me, laughing. He was utterly unswayed by the mother’s attitude.