As I mentioned in my previous post, there are many complaints about micro-housing but they share a common theme. Opponents believe micro-housing will drastically change the character of neighborhoods due to density and design.

Since it is a goal of the city to maintain neighborhood character, this could be a legitimate concern. But when we look at where micro-housing is being built in practice, this concern seems less legitimate. First, micro-housing is largely being built in areas designated as ‘urban villages.’ These areas have higher density, easier access to transit and are walkable. You can see from the map below that the locations of micro-housing development are almost entirely within the shaded areas, the location of ‘urban villages.’ 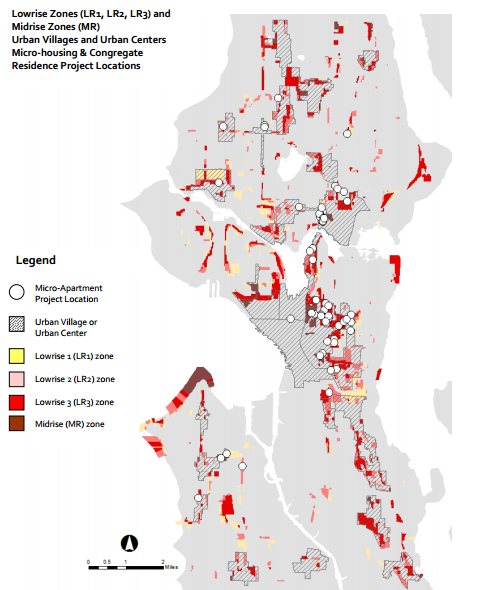 Almost all of the developments are in areas where such developments would not disrupt the character of the neighborhood.

There are legitimate reasons to regulate these developments. Unfortunately, there are a lot of specious complaints as well.

This site uses Akismet to reduce spam. Learn how your comment data is processed.

Our May Meetup guest is outgoing OPCD Director Sam Assefa. Register here for the Zoom link to the May 11th event.

Council President Lorena González is our guest on June 3rd. ICYMI, she is running for Mayor. Details and Zoom link here.

In March, we hosted Roger Millar, who is Secretary of the Washington State Department of Transportation, and you can watch the Millar video here.