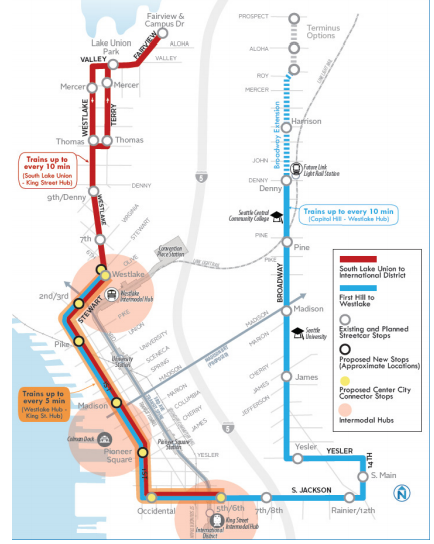 Update: All images are taken from the execellent center city connector presentation put together by SDOT. We encourage you to read through the full presentation to best understand the project. On Tuesday, the Seattle City Council Transportation Committee considered legislation about the preferred local alternative for the Center City Connector, a project to connect the two existing streetcar alignments (South Lake Union Streetcar and First Hill Streetcar) into a single integrated streetcar line. Previous iterations of this study narrowed the focus to a streetcar on 1st Avenue Downtown. The final release of this study, which selects a preferred alternative produced the following findings:

Overall the study produced unsurprising results, though the inclusion of two connection options for the SLU Streetcar was a little unexpected. The full City Council will vote on whether or not to move this project forward on Monday, and if it passes it will proceed onto environmental review and 30% design. If all proceeds as planned, the line may be operational as soon as 2018. Be sure to let the council know that you support the support the project.