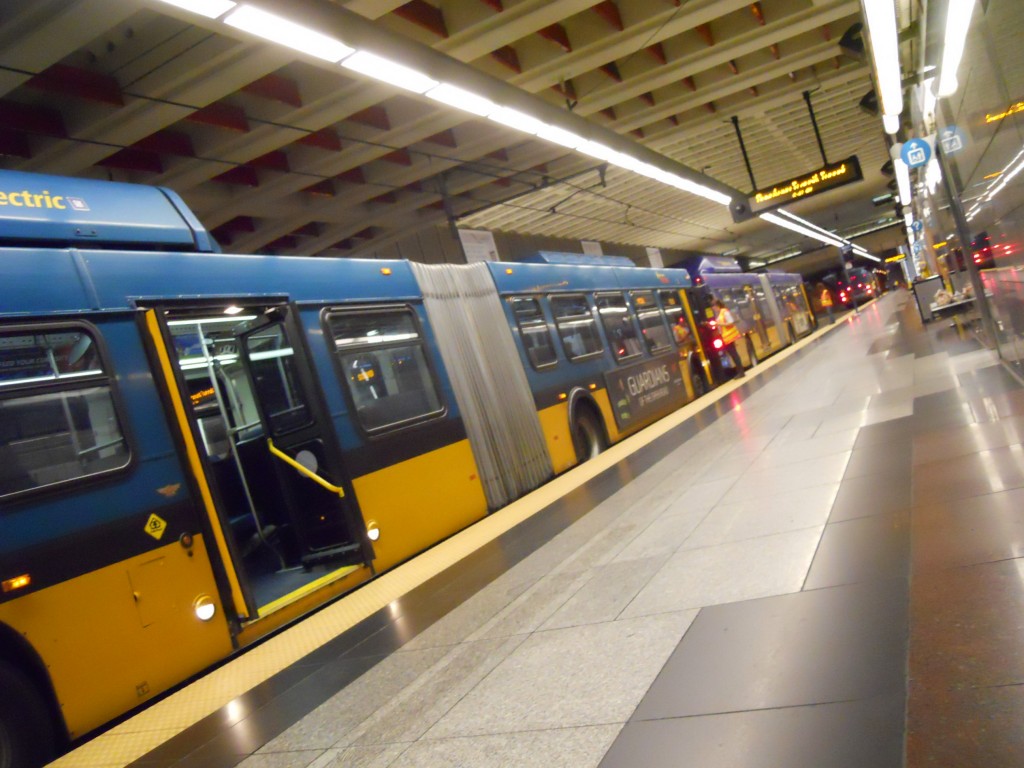 Early Saturday morning I had the opportunity to participate in a simulation of bus and light rail service in the Downtown Seattle Transit Tunnel (DSTT). The DSTT is unique among transit systems, with both buses and trains sharing the roadway and stopping at the same platforms. With the tunnel already facing mass-transit congestion (a good problem to have), the simulation tested if the tunnel could support increased capacity. The tunnel was conceived in the early 1980s as as a solution to buses’ sluggish travel times between the north and south ends of downtown. Construction of the 1.3 mile project took three years and cost $455 million. Five stations, each with a unique design and adorned with colorful art, make up the DSTT: Convention Place, Westlake Center, University Street, Pioneer Square, and International District. Between each station are pairs of 18-feet diameter tubes.

Service officially began in September 1990 with dual-mode buses that switched to overhead electric power when entering the tunnel. The tunnel closed 15 years later for a two-year retrofit that included replacing the original unused rails, lowering the roadway to facilitate level boarding, and constructing a stub tunnel where trains could reverse direction. The tunnel reopened in September 2007 with hybrid buses, and Link light rail began operating between Westlake Center and Sea-Tac Airport in July 2009.

In 2016 Link is expected to begin extended service from downtown to Capitol Hill and the University of Washington’s Medical Center and Husky Stadium. The latter neighborhood is second only to downtown as a regional transit destination, so frequency of service during peak hours (currently 6am-8:30 and 3pm-6:30) will be increased to every 6 minutes (up from 7.5 minutes currently). This will exacerbate the current conflicts between buses and trains; buses are not allowed to proceed when the tunnel between stations or station platform ahead of them are occupied by a train. Saturday’s simulation tested whether buses can be efficiently run between trains.

Volunteers from several transit agencies staffed each station to act as timers and data collectors. I was positioned at the southbound platform of University Street to note the exact time each bus and train entered the station. Over the course of four hours the trains did run roughly every six minutes, and there were frequencies of 40, 45, and 50 buses per hour. I found that the buses tended to travel in groups of two, three, or four, with an average of six buses running between trains. Bus operators were held at their stops for seemingly random periods of time, ranging from 10-90 seconds, to simulate passenger pickup and dropoff and the associated delays with fare payment, wheelchair loading, and crush loads. From my perspective as a frequent user of the tunnel (and from talking with Metro employees), the simulation went smoothly. However, it’s still possible that without actual passengers and operating routes the simulation could not accurately reflect the actual congestion that may occur.

A post at Seattle Transit Blog goes over potential changes to the system. Based on my experience today, I also have several suggestions for improving operations. Firstly, I noticed there is a 15 second buffer between a train exiting the station and a following bus (or vice versa) entering the station. Unless there is a regulation on this, the buffer could essentially be reduced to zero to speed things up; in other words, the bus/train could enter the station as soon as the leading train/bus leaves. The stations are at least 350 feet long and provide an ample safety distance. Related to this, buses are apparently not allowed to enter the tubes between stations if a train is in it (indicated by the red/green traffic lights at tube entrances). This is an even larger cause for delay, since the tube segments are much longer than the stations. Buses should be allowed the enter the tubes immediately and stop a reasonable distance behind any waiting trains at the next station. Additionally, buses should be allowed to maneuver through the center lane if the bus ahead is delayed; currently this lane is wasted space.

Another ongoing issue is the “bays” at each station. Each northbound and southbound platform consists of two bays, lettered A through D, where buses are supposed to actually stop. Almost all of the bus routes are designated at bays A and C (the “front” of north/south platforms), with only a few at B and D. This results in overcrowding at one area of each platform. This also causes multiple bay A and C buses to line up, with waiting passengers having to choose between two risks. If their bus is second, third, or even fourth in line, they could try waiting at the designated spot and hope the driver stops again at the front of the platform. Or, they can try walking down one or two bus lengths and risk being left behind when the bus gets a chance to move up before they get there.

A potential solution is to create additional bays for spacing out stopped buses. During peak hours, before entering the tunnel buses could line up in the order of their designated bays, ensuring predictability for passengers. Redundancy would be minimized because there are spaces for at least six articulated buses along each platform. Alternatively, each bay could have a digital sign that indicates which bus will stop there several minutes ahead of time, based on what order buses entered the tunnel. That would present similar technical challenges that face underground OneBusAway signage and have delayed cell phone coverage in the tunnel, where all of these features are needed most.

This will all be a moot point if buses are removed from the the tunnel, which is a possibility if a train turn-around is built near the International District station in 2019. And while the simulation showed the potential of improved collaboration  between Sound Transit and Metro, only actual operations will show if they can provide the best possible service to downtown (not considering incoming service cuts). As light rail builds out and Seattle grows it will be essential to continue integrating the region’s transit systems.

Scott is a graduate student at The University of Washington’s Department of Urban Design and Planning. This post was originally published at his personal blog, The Northwest Urbanist.