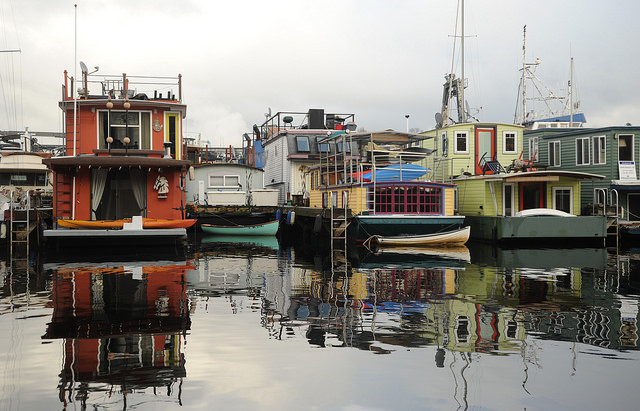 City Hall issues: Mayor Murray made mountains over mole hills to delay the name change of Columbus Day--for symbolic reasons that no one cares about. The City’s measure for schools may lose to the citizen initiative going head-to head while the Hearing Examiner will entertain an appeal against changes to multi-family low-rise zones. Mayor Murray wants to create a new Department of Education and Early Learning, but Council must approve such an action first. And, Publicola reports on how the Mayor is basically ducking the whole micro-housing issue.

Local transit: Seattle Transit Blog has a run down of the February Metro bus cuts, which have been revised. The West Seattle Water Taxi set a brand new monthly record with over 50,000 boardings during the month of August. A case for repurposing a building owned by Sound Transit at the Bellevue Transit; we like the idea of a bus pass shop or retail use.

Not so bikable: The Stranger wonders if helmet laws will impede the success of Pronto! and takes a huge swing at City of Seattle officials for failure to implement the Bike Master Plan, which just might have saved Sher Kung’s life. A very compelling call to change the streetscape for all users along Roosevelt Way and 11th/12th Avenue in the U District, Roosevelt, and Maple Leaf. City Lab examines how bike lanes actually reduce traffic delay. And, the Broadway Bikeway is seeing a surge in ridership, now more than 600 daily.

City highlights: A brief history on the Montlake Cut–landmass to waterway. Floating homes on Eastlake having viewings this weekend. A Capitol Hill theater company plans one last gig before it moves in the 12th Ave Arts building. SIFF’s Egyptian Theatre on Capitol Hill will open in October with free shows for neighbors! Seattle has the dubious honor of being the state’s first guinea pig in the charter school arena; we can only hope that this won’t be a trend, or that it will harm our local schools.

Elsewhere in the Sound: A treatise on development north of Seattle that has led to sidewalks becoming useless, but they apparently have a much larger discussion thread for greater Snohomish County area, if forum thread are your thing. Wonks. St. Edward State Park, a former seminary in Kenmore, is in jeopardy of falling apart, and the state has no way to fund repairs. Hope is in sight though if the right deal can be struck with a private partner.

A broken dream: The American Dream is now micro, or at least a slimmed down America. Ironically, it isn’t only the young bailing on the large house, so too are the aging Baby Boomers who bought off more than they could chew when they bought into environments built only for the young. The sprawl of Atlanta is horrific when you compare it to Barcelona‘s comfortable compact nature, which has more residents and is 1/10th the size. Apparently its tough for a true urbanite to live in a small town, at least for Reyhan Harmanci in her personal story of quaint Hudson, NY. Old Urbanist talks about the demise of the duplex and related housing types. And, a map of decline around St. Louis and article on how St. Louis County profits from poverty.

Competing solutions: The Federal Highway Administration touts a rebound in driving, and say it’s time to build more highways–except it’s not true on a per capita VMT level. Mental disorders keep tens of thousands of homeless on the streets in the US, but there are solutions to this. Portland, Oregon looks at tiny houses as one solution to homelessness.

Focus on the UK: The UK Airports Commission has put the kibosh on ambitious plan to move London’s major airports to a consolidated location on east Thames. Forget London, Mexico City has an even more impressive airport in terms of design. Meanwhile, UK Thatcherite privatization of the railroads has seen private railway operators split from semi-public railway infrastructure company Network Rail. Turns out that Network Rail has been subsidizing the system by transferring publicly borrowed British Pounds to railway operators, and now the public are on the hook for it all. Apparently this is the most new oppressive building in the UK for 2014–way to go Tesco! And, an eclectic skyscraper that could transform the way people live; it’s very futuristic.

Other overseas urbanism:  A German town gets rid of traffic signs, traffic lights, and most rules of the road, but guess what! The streets are safer now that they’re a shared space.  Copenhagen has ignored calls to implement street calming and conversion despite a compelling case, so Copenhagenize has done the legwork for the municipality. And, New Dehli put the brakes on cars for a day to bring sanity back to the city, and the results were amazing. I guess if you’re going to make a waste incinerator, you may as well make it beautiful, too.