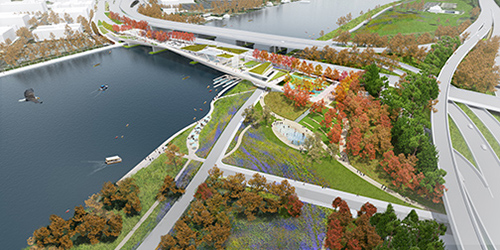 Just the facts: Streetsblog discusses HOT lanes and if they really work for transit, it appears they can be a blessing and curse, but mainly just a curse. The data keeps showing that, yeah, the kids aren’t driving, they prefer a multiplicity of modes that aren’t car-based. A before and now of Oklahoma City, its freeway torched the city center, but it looks like OKC officials have some good plans to fix that. Why is DC’s rent so damn high? Blame it on Congress, duh! And, what’s your city’s ratio of place to non-places?

Stop with the Plan Bs: Seattle Transit Blog offers up 10 ways that Metro is better than ever–we forgot how great ORCA really is.Tom over at Seattle Bike Blog makes the case that a “Plan B” for Ballard and the Burke-Gilman Trail is absolutely not the way to go for the Missing Link. SDOT talks about “Access Seattle” in detail for South Lake Union and how it’s a program to ensure access in high construction areas for all modes. Since Sound Transit is already looking to increase fares by $0.25, maybe it makes sense to induce people to use ORCA by increasing cash fares to $3 and $4 even. Tom also gushes on the Divvy bikes back in Chicago (it appears he missed the Pronto! launch at home). And, a photo series on the Link extension from the airport to S 200 Street.

New walls: A brief history on the creation of I-5 that ripped apart Downtown, Capitol Hill, and more on its way north across the Ship Canal. Are we ready for the “big one”? King County has adopting a living wage for all County employees and some contracted positions. It looks like King County will also get its new Youth Detention Center in First Hill after the Seattle City Council approved the land use action; say goodbye to the ugly old block. And, take a peek at the first bit of the seawall installed.

This week in maps: A tool that lets you track the explosive growth of megacities. A former mapmaker for insurance companies turns out to have a wealth of detail in many old cities, it’s data and map junkies treasurer trove. Some sweet English railway map that was less about where the trains go and more about how to charge them.

Shiny objects: This European Alpine villa is pretty amazing, especially because you’d almost never notice it in the landscape. DC has picked its winning architecture team for the new 11th Street Bridge over the Anacostia River, the designs are superb an multi-functional. Now this is how you do a new railway station, leave it to the Danish. Slooped roofs in an Amsterdam neighborhood that completely integrate the green in green roof.

Micro palaces: A clever quip by Nathaniel Hood of Strong Towns that people don’t get engaged in the suburbs–or at least their engagement photos. Politico profiles microhousing in Seattle with the developer talking head Roger Valdez as the story’s centerpiece. The Guardian argues that the increase of cycling isn’t just good for cyclists, it’s good for everyone. The new global talent centers are out for 30 cities across the globe–we still lost out to Vancouver.