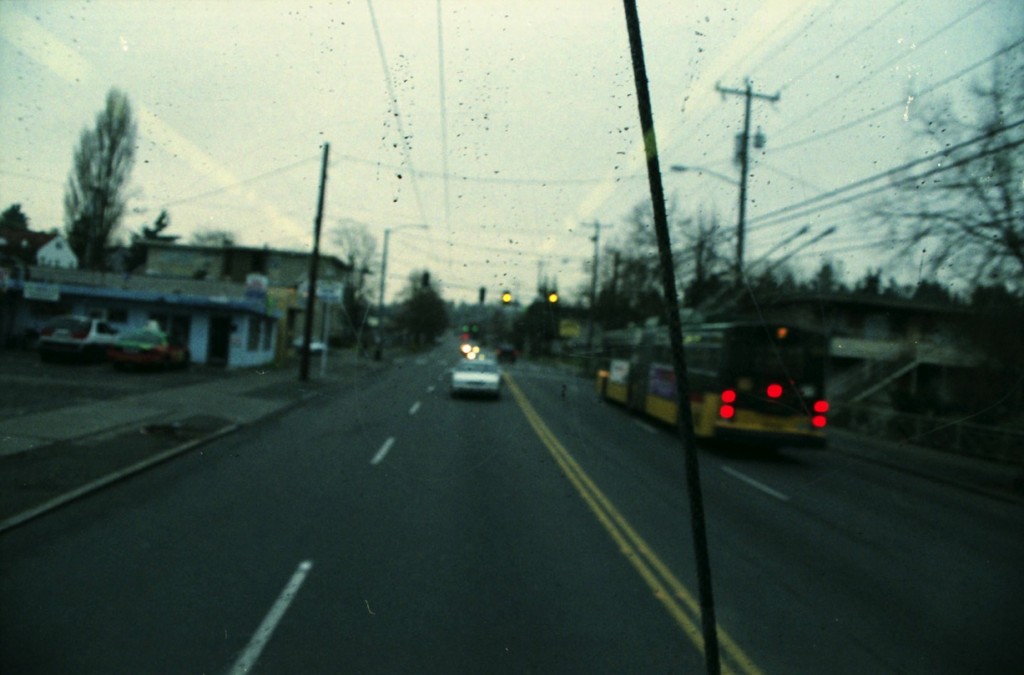 “Hey, wha’s happening.” That’s me, greeting the OG’s stepping on at Othello. The Valero gas station there is a 24-hour institution, a cultural fixture on Rainier, a landmark of commerce and questionable exchange as necessary to announce as Chase Bank and the Columbia Tower. It’s never a question of whether there will be anyone at the zone, as there always are, even at 1am; it’s a question of how many want to get on. Tonight we have a few takers. The last, a mixed African-American man with the wispy grey beard of a kung-fu master, stops and stares at me without responding to my greeting. Then, in a tone of incredulity, he says, “holy shit! Wha’s goin on here? Ain’t no way this is for real. I got to be checkin’ for your license, ’cause ain’t no way you old enough!”

It’s a song I’ve heard before, and I respond with the line about the learner’s permit. But this version of the conversation feels amped up to eleven. Certainly it’s the first time he’s seen me, and his emotions feel new.

Staring at me from the chat seat, thinking it out for a second: “and I know I ain’t the first to say that shit either. But damn!” Daayumn. “You look younger than my youngest!”
“It’s all for real, I promise! All on the level,”
“Ain’t no fuckin way!” His tone is one who’s witnessing something too good to be true, like he hesitates to believe. “I got a nephew who’s eleven, and you dont look a day… man, where the camera crew at, ’cause I know this shit is a setup! People must be sayin’ this shit to you all the time!”
“At least a couple times a day,” I say, realizing it happens way more often than that.
“I’m surprised it ain’t all day!”
“I guess it’s about once a trip….”
“I’m ’bout to pull out some Doogie Howser shit, you know that, right?”
“Oh, I do!”
“How they HIRE you, bro?”

We’re starting to come down off the initial high, and glimmers of reality enter the conversation–
“I remember thinkin’, during the interview, there ain’t no way they gonna hire me, ’cause I dont look like any of the other bus drivers! But they did!”
“Man, but man, you got a, honestly, you got a good thing– and hold up, you only half Asian, right?”
“Wow, you know me! Yeah, exactly!”
“Hey, it’s the genes. black don’t; BLACK DON’T CRACK, BUT ASIAN AIN’T PLAYIN’.” Authoritatively: “That’s my new sayin’. I’m a roll with that. Black don’t crack, but Asian ain’t playin’. I knew a half-white guy once and he well, he weren’t playin’ cuz he wasn’t Asian, but he definitely cracked. But you, holy shit, you got a double dose o’ the good stuff.”
“Guess we got the genes,”
“I know you been down to the Caribbean, ’cause that’s where they say the Fountain of Youth is. You really got that shit. I know some white women who would KILL you.”
“I’m just tryin’ to grow up and be like you guys!” Referring to him and one remaining passenger, an older black man who desperately wants to go Auto Zone. “I know that’s right,” Auto Zone says. I say something about how I love the job, that I started seven years ago but I still–
“The– what? Am I believin’ in what I just heard? Do mah ears deceive me? Did I just hear you say–”
The old guy interrupts with, “how long you been doin’ the 7?”
“On and off since ’09.”

Our friend turns to the older gent. “Man, this guy got it goin’ on. You’ll be doin’ somethin’ else before long. I see you got some serious shit together. And man, when you turn sixty, dude, everyone gon’ think you thirty.”

I downplay his praise, and he downplays my modesty. I never thought about mortality so much until I started this job.

“Sometimes I wonder it’ll happen overnight, I’ll wake up look in the mirror have a bunch of grey hairs.”
“Fuck that. You’re good. How do you DO it? What the hell do you eat?”
“I’m just tryin to hit them fruits and vegetables!”
“No man, you be hittin’ some BLACK shit, seriously….”

The older gentleman gets off, absolutely reeking of marijuana, and our friend good-naturedly ribs him for it: “Damn, I know where to come for the good shit. I know you got the good stuff, ’cause ain’t nobody else left on the bus. And I know it ain’t the muhfuggin’ bus driver!”

Alone on the bus, he and I continue chatting as we go up the Prentice loop at the end of the route. His word choice is very street, but his enunciation and general air (plus that refined goatee) connote a formal education and more importantly, a wisdom gained from multiple fronts of life. I feel comfortable speaking what’s on my mind.
“I had two fights today.”
“Only two?” he says.
“See, you got a good attitude!”
“How did that, I mean how did it affect the running of your bus?”
“You know, it was okay. Everybody else was heeeeellla nice, and I think they appreciated, uh, me tryin’ to level everything out, balance out the situation, you know?”
“Aw yeah, people appreciate that no doubt. You tryna keep it movin’. Motherfuckers out here don’t like to put up with that bullshit. I smoke my weed, maybe drink a little too much sometimes, but I don’t interefere with the commerce, you know? And dude, dudes out here got your back. For a dude like you, I’ll fuck up anybody, man. I got your back. Anybody tries ackin some stupid shit, I be right there.” Quite a few other brothers have told me this before, and there have been times when they have followed through with aplomb. “I’ll give ’em the double elbow, send ’em flyin through the window for you if you need it. But we gotta be workin’ in concert. You gotta have that door open just the right second–”
“Precision timing–”
“Ezzactly. Send ’em flyin’ out there, close the doors we be movin’ right on away, we gone, ain’t nobody gettin on the back doors,”

He’s carried away in his daydream, and continues to explain hypothetical details. I’m thinking about how I like his use of the phrase “in concert.” Not really the parlance one hears in fictional ghetto dialogue. Out loud I say, “you know what I like about the 7 is, is that respect goes a loooong way out here.”
“Oooh yeah. And a long time.”
“People remember stuff.”
“My Uncle was for thirty years a Metro driver,”
“Oh, nice!”
“Well, but he was an asshole.”
“Oh.”
“And that shit just really don’t work out here.”

I think I like the 7 in part because it forces discipline. It’s like balancing on a knife edge. My Father and I were recently discussing a certain 554 driver’s unconscionable behavior toward a passenger, and we agreed that with his attitude he wouldn’t last a second on the 7. The tolerance level for condescension and judgment out here is extraordinarily low. But if I’m patient and generous and capable, the rewards are tremendous. The gratitude is palpable.