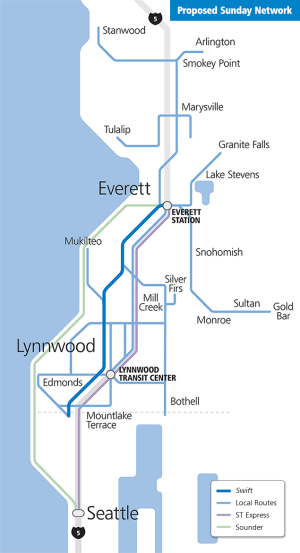 Community Transit (CT) is proposing significant service changes for 2015 that includes 27,000 new service hours for the network. The agency is proposing to bring Sunday and holiday service back while adding more hours to weekday and Saturday service. This is no doubt very welcome news for riders in Snohomish County.

So what are the proposed changes? 16 routes are proposed to operate on Sunday and holidays, which essentially mimics the Saturday network–with the exception of Routes 115 and 201. The span of service is route dependent, but the overall network is anticipated to operate from 6.45am to 9.30pm. And, the preliminary frequency for routes will fall into three categories:

Community Transit designates six major holidays that it will operate: Memorial Day, Independence Day, Labor Day, Thanksgiving, Christmas, and New Year’s Day–Independence Day will be the first holiday that it operates under the new service plan. DART service will also be added and cover the same areas as fixed routes and schedules.

The new Sunday/holiday service is similar in geographic area as the previous one from 2009. However, the new scale of service is about 65% of the old with fewer routes operated. Community Transit will add additional service hours–as they become available–to Sunday service with the goal of having a consistent “Weekend Service” for both Saturday and Sunday.

Riders may not be so keen on a fare increase, but Community Transit is proposing one for 2015 in order to match increased costs and inflation. Adult fares for local and commuter routes would each increase by $0.25. DART paratransit, regardless of age, would also see fares raise $0.25 to $2.25. All other fare categories would remain unchanged. Fare increases are proposed to go into effect on July 1, 2015.

Service along the Highway 2 corridor is proposed to be restructured. This will help improve reliability, reduce transfers, increase coverage, and all-day service. Currently, Routes 270 and 275 serve the Highway 2 corridor. Route 270 provides service between Gold Bar and Everett with local stops between Gold Bar and Monroe and limited stops between Monroe and Everett. Route 275 essentially fills in the gaps by providing local stops from Monroe to Everett via Snohomish.

However, as part of the restructure, Route 275 would be deleted. A new Route 271 would be added in its place to provide better coverage to Monroe. New Route 271 would operate with limited stops from Gold Bar to Monroe and local service from Monroe to Everett. This service would operate seven days a week. Meanwhile, Route 270 would operate as an “express” service on weekdays from Gold Bar to Everett in the peak direction, morning and afternoon. Combined headways of Routes 270 and 271 would create a 30-minute frequency on weekdays to and from the Monroe Park & Ride.

Route 222 is a local route serving the Tulalip Indian Reservation and Marysville. Its central focus is linking riders with neighborhoods and local shopping/employment centers like Quil Ceda Village and downtown Marysville. However, the routing is indirect and slightly like spaghetti. Community Transit is proposing to simplify the route by deleting the 4th Street-64th Street alignment west of 67th Avenue. Instead, Route 222 will proceed along Highway 528 to and from Highway 9 near the Walmart. Public comments on all proposed service changes (including the fare increases) are open from now through January 9, 2015. You can contact Community Transit directly via e-mail at 2015changes@commtrans.org and/or meet with staff. Four public meetings will be held throughout Snohomish County from November 19th through December 11th: