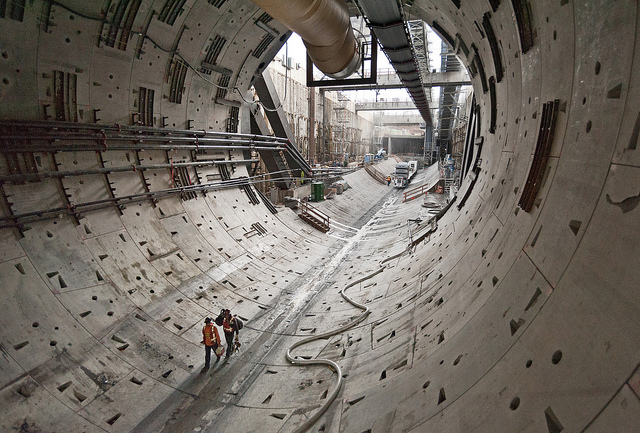 A compelling case: Cary Moon lays out a reasonable path forward to end Seattle’s version of the Big Dig before it destroys the city and costs lives. Dominic Holden previously wrote about how the Viaduct replacement project could wrong. And here’s a blast from the past: McGinn and Gregoire go head-to-head over the tunnel.

Racial game: Parable of the Polygons is an interesting online game to simulate segregation and diversity, and how groups of people interact for better or worse.

Working class tax credit: A map of where the Earned Income Tax Credit goes across the US.

Moving a city: A Swedish city is moving to make way for a mine operation, the planning work and funding for this effort is fascinating to say the least.

16k new service hours: Pierce Transit is adding a lot of new service for 2015, mostly for weekends, but there is a word of caution. Lakewood and Puyallup will also get improved service.

An auto-oriented NYC: What it would take to provide enough parking and bridge infrastructure to turn Manhattan into car central.

Sold: Paseo has been sold, and it looks like it may just return.

A map of poverty: The areas of poverty in Seattle probably won’t surprise you, but here’s the data.

Train lasers: The Netherlands is slated to get lasers on trains to clear the tracks.

Shuttered windows: There may be a new way to shade houses that is less intrusive to the public.

Bright lights: Daan Roosegaarde continues his project to spiff up public spaces with lights, this time Amsterdam’s central station. Meanwhile, NYC is looking to reduce its light pollution through legislation on businesses after hours.

Raise the gas tax: Right now may be the best time to raise the Federal gas tax.

Power to the cities: Beginning in 2015, Italy will bestow most power of government upon centralized metropolitan districts run by the country’s major cities.

Redesigned design: The Cooper Hewitt, a constituent museum of the Smithsonian Institute, has reopened in New York to an amazing new set of exhibits and galleries.