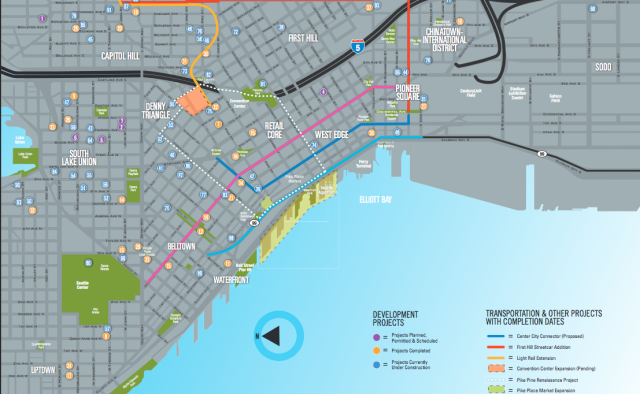 By the numbers: All the key numbers of a growing, changing, and vibrant Downtown Seattle.

Learning from Spock: You’d have to live a hole at this point to not know of Leonard Nimoy’s passing. He was a gentle soul, just like his Spock character, who really did believe in Utopia–we can learn from that.

Fair changes: Bus and train fares may be going up in some ways, but ORCA Lift is also coming to reduce fares for low-income individuals. Look for the changes beginning tomorrow (March 1).

Flash back: New York City wants you to take a stroll down memory lane to bygone eras. A new system has been launched to look at historical maps throughout the boroughs.

Bonkers for bridges: London seems to have a fascination with fancy pedestrian and bicycle bridges. Have they gotten just a little bonkers?

Bike map makeover: Seattle’s official bike map just got a big overhaul. Tom at Seattle Bike Blog breaks it down for us and says how it could be even better.

Please fix it: Just how dangerous is Rainier Ave S? The answer is: very. On a per mile basis, it has almost 100% more collisions than Seattle’s next most dangerous street. Of course, it could get a whole lot better.

Born Again Bertha: Repurposing the tunnel: Sure, it’s totally in jest, but a new idea is being floated with how we might convert the SR 99 tunnel to a whole bunch of bigger and better uses. The Stranger talks with man behind this grand idea.

Comparing Seattle: Someone spent a lot of time on Google Maps and Wikipedia to compare Seattle to places across the globe.

New brew: Elysian might have sold out to Budweiser, but an Elysian brewmaster could end up creating his own brewery.

Underground parking: Of course it would be the Dutch to create underground bike parking storage first…

The NYC Subway: This gif is pretty slick, watch the NYC Subway grow from nothing to everywhere.

Squeezing it in: A beautiful little home that once served as a small workshop in London.

Not sprawling: A new index says that Los Angeles in fact isn’t sprawling, or at least not as much as San Francisco and New York City.

Life and death of cities: City centers are growing jobs while suburbs are quickly drying up for jobs.

Ripe or rotten carrots?: Tax exempt for 40 years, that’s what one Brooklyn landlord would receive if they kept 700 units rent regulated.

Blocking growth: Some Mercer Islanders have rallied to stop any new housing options on the island community.

City broadband: Cities across the US could create their own broadband networks thanks to legal barriers being dropped.

The freezeway: An Edmonton, Alberta architecture student wants to create a freezeway for ice skaters. Something tell us this is lawsuit waiting to happen, but the idea is fun!

A British Eiffel: There can only be one Eiffel Tower, but the British had a number of plans that never became viable in the end.

The value in street names: What’s in a street name? Evidently, the data suggests that there’s a lot actually. A handy database has everything you ever wanted to know about the First Avenues and Broadways of the US.