Editor’s note: We at The Urbanist wanted to let you know about a chance to support two housing advocates we’ve partnered with many times while pushing for good housing policy. Organizing folks to engage in the public process and push for affordable housing is tough and often thankless work, but it’s essential to our success. We want to thank Alex and Laura for their organizing work and encourage people to support them and attend their house party.

Two local housing activists, Alex Broner and Laura Loe (Bernstein), are hosting a house party to celebrate their work from 5.30pm to 8pm on Friday (June 23rd) at Loe’s home in the U District.

Throughout the last three years, Broner has been working to identify and promote innovative, publicly funded housing choices. In January 2016, Loe quit grad school to organize full-time, to educate people about the connections between land use, zoning and how to make our city more welcoming, and to tweet as @yimbysea.

Attendees will hear from local developer and activist, David Neiman, who will present a fascinating history of Seattle’s land use code, and from Councilmember Kshama Sawant about why we need publicly financed housing now. Additional speakers will include Myra Lara, local queer, Latinx artist, and Kate Brunette, Housing Now volunteer and current campaign manager for Jon Grant for City Council.

Housing Now is a grassroots campaign to expand publicly financed housing in the Seattle area. Seattle has a deep affordability crisis. Publicly financed housing must play a strong role in achieving affordability by expanding the total supply of housing, creating units which are affordable on day one, and ensuring homes which will remain affordable permanently. Towards that end, Housing Now is committed to help Re-imagine Affordable Housing. By expanding affordability in our city, we can serve as a national model and help ensure our communities are welcoming to all!

Alex Broner is the founder and Director of Housing Now. For the past two years Housing Now has been conducting research and advocacy for the purpose of expanding publicly financed housing. Broner has a Masters in urban and regional planning from the University of Hawaii. 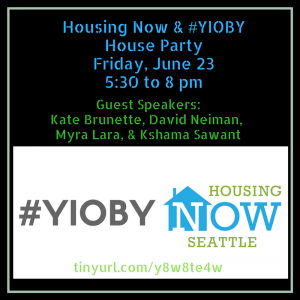