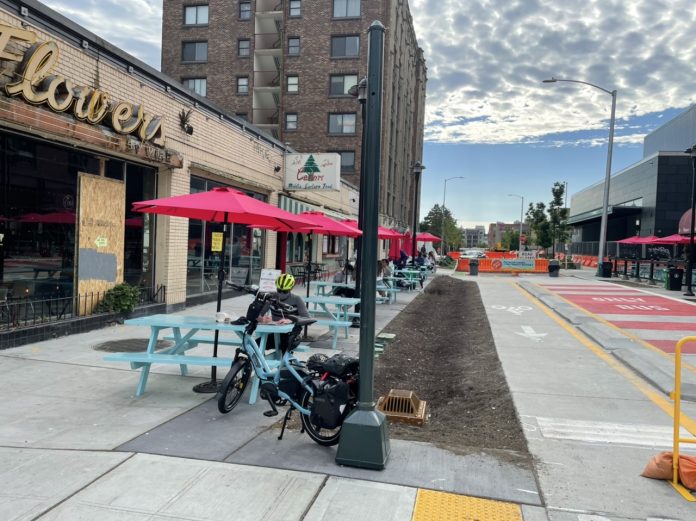 8,550: Out of millions of on-street parking spaces, New York City transformed 8,550 for outdoor dining space during the pandemic.

New digs: In Everett, residents are moving into the new Compass Health apartment building and benefiting from treatment ($).

Stalled: What’s been happening with the $45 billion in federal rental assistance funding?

Transit-oriented development: In Coquitlam, some 8,000 housing units and mixed-use are planned as a massive development near the SkyTrain.

Move Redmond: Move Redmond is a new incarnation of a city transportation management and advocacy organization.

False choice: In Franklin County, commissioners want to cut transit funding to provide for other services instead of raising more revenue.

Dead again: The future of Metro’s Route 47 is murky, but it’s not looking good.

Not surprising: The pandemic relief checks sent out by the federal government have greatly blunted and reduced hardships ($).

Trails for all: Active transportation advocates are pushing for $10 billion in federal funding for walking, rolling, and biking trails.

A grievous sin: Local, state, and federal legislators are mistakenly pushing for highway expansion of US-2 instead of just replacement ($).

Planning for the future: Officials in San Diego say that a massive $160 billion plan for transit and high-speed rail can succeed if the region accommodates more infill development and residents.

CT zoning reform: Connecticut has passed a progressive zoning reform law to undo exclusionary zoning, but will the state’s governor sign it into law?

Bridge the divide: Portland has a new pedestrian and bike bridge, this time over I-405 in the central city.

Olympic deadline: A Streetsblog op-ed argues that California needs to commit to completion of high-speed rail between Los Angeles and San Francisco by 2028 in time for the Olympics.

Technology creates new problems: Autonomous vehicles are hailed as a savior, but they could speed up climate change.

No more highways: Portland succeeds in getting Oregon to hand over another state highway to the city as a street.

Union Station’s future: There’s a lot of interest in federal infrastructure funding, so what could that mean for Washington, D.C.’s preeminent Union Station?

Shot of a Lifetime: Washingtonians that get a Covid shot can qualify for many lottery awards and gifts.

Port Townsend transit: Jefferson Transit are considering a twice-daily bus route to Kingston where riders can connect with Seattle- and Edmonds-bound ferries.

Little Island: After years of delays, a new park has opened on the Hudson River in New York City ($).

Mucking things up: A Los Angeles councilmember is throwing a wrench into bus rapid transit plans ($).

Not wrong: BART Silicon Valley got ripped to shreds on social media about a grandiose deep-level subway station in San José ($).