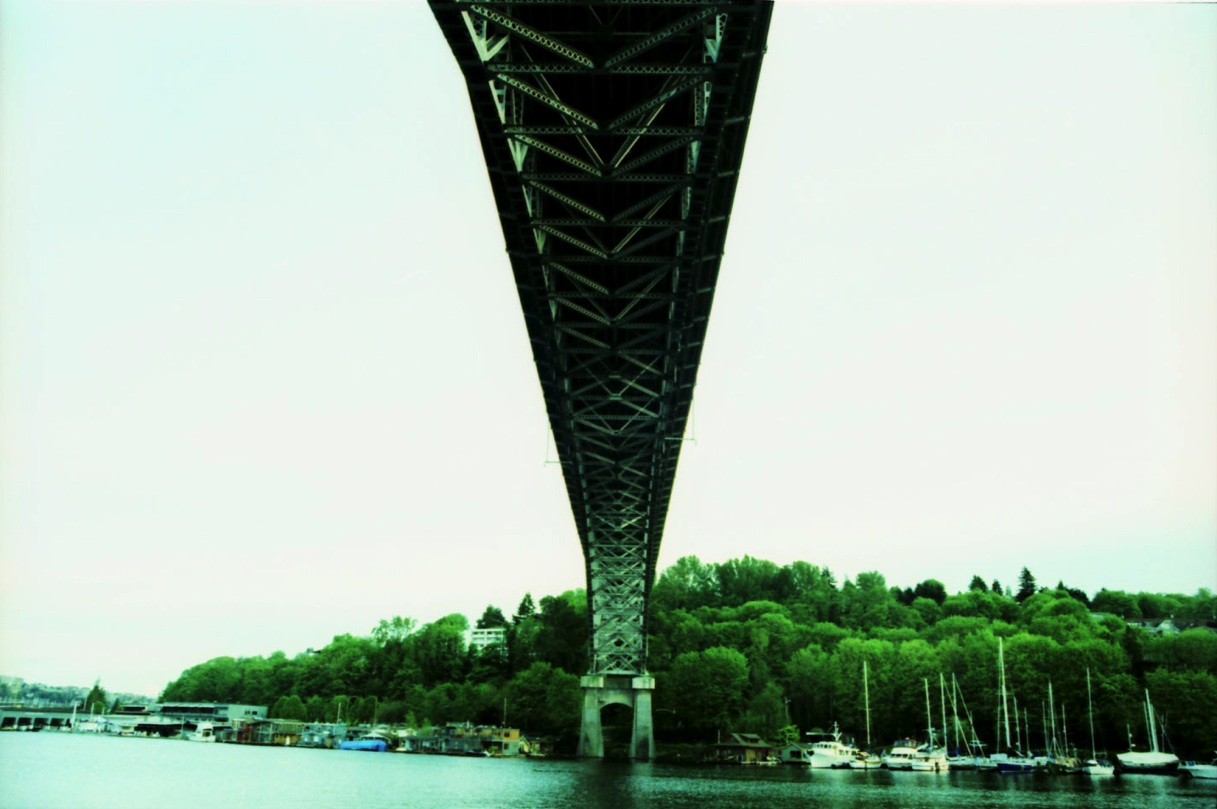 “Are you righteous? Kind? Does your confidence lie in this? Are you loved by all? Know that I was, too. Do you imagine your sufferings will be less because you loved goodness? Truth?”

I’ve driven buses across the Aurora Bridge about a thousand times. Every time I do so, without fail, two thoughts cross my mind.

The first thought is inevitably on how incredibly beautiful the everything looks. Regardless of conditions, whether stormy, foggy, clear; whether a loamy yellow in the setting sun or night after dark in deep blues, where you can sense the vast space while hardly seeing it—wow, I think, coming around the curve at Halliday and bursting into the wide open expanse.

The second thought is always about Mark McLaughlin and Silas Cool, plunging off the bridge to their deaths, taking the bus and all the passengers with them. Mark was not a driver who behaved in a way that would encourage assaults. He was one of the friendly guys. Perhaps you know of the incident; everyone on the bus either died or was injured, and the route number, then called the 359, was retired. Why change the number to 358? As Ron Sims said in 1998, right after the event, “so that years from now, people will ask why? And we can remember a person . . . we never want to forget.”

As I cross the bridge where he died, driving the same route he drove, the question naturally occurs to me how I would feel if the same circumstances took place on my bus. Am I prepared for that, I always wonder. I know what the answer needs to be.

The answer needs to be, I am completely okay with it, eyes open and ready.

We all have our differences, but there are a few universals. One of them, I think, is that we all wish to close our eyes for the last time having as few regrets as possible. People talk of squaring things away before they pass on. Time to make amends, as the saying goes. Having that long talk with your estranged brother. Connecting with your daughter before you Go. Being on good terms with the ones you love, and with yourself. Why wait till death’s door to be able to look in the mirror?

There is a drive in me to be good, to try and make actual my ideal of a good person. Part of it is reinforced by the daily reminder the Aurora Bridge offers. Awareness of death really means awareness of time. We place value on time only because we know it is limited, and what Bruegel the elder called the Triumph of Death can in fact be seen not as desolation but as a light, a gift of insight, the window through which we perceive the value of happiness and right action, now.

That’s part of the drive in me to square things away. I like a clean closet.

John is the guy from the end of this post, he of the white ponytail and smoky voice. He found me when I first started on the 358 over a year ago, and was thrilled by my attitude. “This is route is NO JOKE,” he would say, amazed at the ebullient sensibility I chose to bring to the environs. He’d stand at the front of the old 2300-series coaches and we’d gab it up.

The bus was often full—the chat seat not available for him—and the yellow line he’s supposed to stand behind was a couple feet back from my driver’s seat, making it awkward for him to stand and talk to me while still following the rules. I wouldn’t have minded if he was over the line- on those coaches it was painted pretty far back, and his being a bit in front of it would not have been a safety issue.

But John would lean in precariously, positioning his body at a gravitationally suspect 45-degree angle, proudly pointing out how his feet were “definitely behind the yellow line, check it out,” even if his entire body was in front of it. I enjoyed his company. He was rarely sober, coming from the bar after his day at work, and we would discuss the books he was reading, relationships, and kindness to strangers. I’d ride the 44, a passenger, and I’d see him get on and we’d keep right on talking as if the intervening weeks or months hardly existed.

Then one night I was in conversation with a driver friend at Aurora Village Transit Center when he came over. I was keyed into the discussion I was having, and intent on listening to my friend.

“Hey John,” I said distractedly, happy to see him but anxious to keep talking.

I nodded impatiently and he stood there, feeling uncomfortable in the ensuing silence. “Good to see you,” I said perfunctorily, and he smiled politely and walked away.

After that I didn’t see John for a while, but I wanted to talk with him- erase that awkwardness, and let him know that of course, I like his company. Yes, this is pretty small fry as far as regret-inducing dilemmas go, but sometimes it’s the little things that gnaw at us.

Weeks later- there he was! At 85th Street outbound! Hooray! The crowd began filing in, face after face, but… no John. He stayed back, outside, choosing instead to wait for the next bus. “John, what the heck are you doing,” I said aloud to no one in particular as I drove away. “You’re supposed to be riding my bloody bus!”

On the second-to-last day that the 358 ever existed, I saw him again at 46th. My bus was packed, and the general consternation of people boarding and deboarding lasted several minutes. Once again he didn’t board, instead standing just out of my sight, by the rear of the bus, sipping on his paper coffee cup.

“John, hey, man!” I said, jumping out of the coach and striding toward him. I didn’t think about the crowd inside the bus, watching and waiting. I just needed to shake his hand. It would take too long to explain why. I just like taking care of these things. Smoothing out the inconsistent details, ribbing the half-forgotten itches out of consciousness.

Me, grabbing his right hand in a firm shake, left arm reaching back for a man-hug. “What’s goin’ on, John? Good to see ya!”

“You finishing up work?”

I honestly can’t remember his response. I was too excited, gleaming as I took in his crisp eyes, chapped red skin, and bright smile. He was back; all was understood.

“I think I’ll finish my coffee here, get my book out.”

“Sure no yeah, makes sense. You wanna relax, spread out on your way home, I’m into it.”

“Hey listen John, always good to run into you.”

“I’ll see you again!” I said, hopping back inside my bus. We’d walked back up to the front together.

Only then did I register how odd all this must have looked to the other passengers. The last days of the 358 had the quality of time traveling at a speed outside my experience. The act of shaking John’s hand collapsed the entirety of the day into a gesture. In it lived the desire to make things right, to touch the lives of all the strangers I’d come to know, to be close to the tough reality that had taken me in with such kindness…. To live and be in these final moments, without the need to process them yet as memories, to learn how to glory in the last breath of time, without sadness.