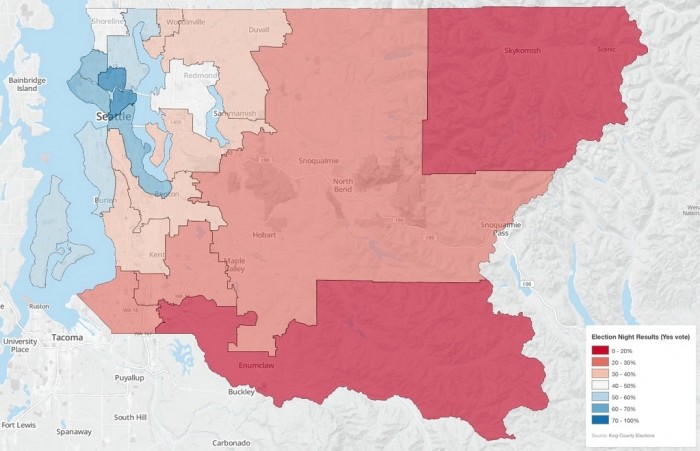 Postmortem: The buses will beginning getting the axe in September, Metro has an organized service reduction plan to achieve the necessary cuts over a one-year period. People are mad, but it ain’t the first time at this rodeo. Tons of voting data is becoming available if you want to explore the fallout, but it isn’t all bad.

Born again: Metro could still be saved, Ben and Company will lead the charge by championing a Seattle-only measure. Yesterday, the initiative was lodged with the City Clerk’s office. Take a preview at it and then make sure you sign the petition in the coming weeks. And, if you want to help, be sure to let Friends of Transit know.

Bone dry: California has finally become entirely drought ridden. Hopefully this water crisis doesn’t repeat next year because deficits build up and in the long-term this could spell utter disaster for the Golden State. At the same time, we need to get serious about topics like resiliency and rising sea levels. If California is any kind of indicator of things to come, tackling the issues of adaptation and slowing the speed of global climate change will be ever more important.

Lots of green: The eco-friendly Bullitt Center generated more energy than it consumed, 105,300 kilowatt hours more to be exact! We can definitely appreciate true living buildings, and Seattle is lucky to have the greenest of them all.

Supplying China: There are some serious ironies here: a defunct California RV manufacturer will produce electric, carbon-free buses for carbon intensive China. There’s a lot to like about that. Of course, we’re not completely innocent when it comes to emissions. 40% of Seattle’s emissions come from filthy motorized transport like cars and trucks. We may have lost that battle a long time ago, but we can win in the future.

Maybe the witch is dead: Bertha, the SR 99 tunnel boring machine (TBM), is falling further behind schedule. The restart date for the TBM will expand from September 2014 to March 2015. WSDOT say that the project can be delivered on-time, but the cost estimates are already ballooning and we are highly skeptical that the project can even meet the revised schedule.

Bike month approaches: We already know that Seattle loves bikes, but lots of good things are on the horizon (besides bike month). Two concepts for the Westlake Cycle Track are currently being evaluated by the Seattle Department of Transportation (SDOT). Tom over at the Seattle Bike Blog gives us the skinny on the concepts, and argues that Concept B is probably superior, but does have some downsides that would hopefully be addressed in a revised hybrid. In other cycling news, the Puget Sound Bike Share has announced that Group Health Cooperative will sponsor 15 bike stations with many other sponsors joining the cause.

15 Now, 15 Maybe: Mayor Murray held a press conference this week that basically was a non-event. The committee responsible with coming up with a plan to raise the minimum wage to a living wage couldn’t agree on any of the terms to make it happen. The saga of 15 Now continues…

Tear it down and they will come: Rising from the ashes of a former highway comes a whole new city. Hmm…isn’t that something we’re supposed to do here? At least we’re rebuilding the Seawall and helping out the fishies during the interim.

Get your map on: If you’re wondering if it’s easy to get to work by walking, biking, and car in a particular metro, this new mapping software can give you an idea of overall access. And while you’re at it, may you want to walk back in time with the new Google Street View.

To preserve or not to preserve, that’s the question: In good old NYC, the Museum of Modern Art is look to ditch an old building, but folks in the East Coast city want to reuse it. The question is, should it be saved? We have the same issues arise here from time to time, but the outcomes of preservation can be mixed. Speaking of the East Coast and reuse, DC is planning a clever way to spice up a danky old underpass. Who wants to hangout under the railway tracks!? This kid!

The answer lies in Colombia: Seriously, Medellín can teach us how to accommodate explosive growth and get creative. Christopher Swope give us an interesting set of interviews on this South American metropolis.

Tap that: SDOT will soon be turning on the ORCA reader stations along all stop of the South Lake Union Streetcar.