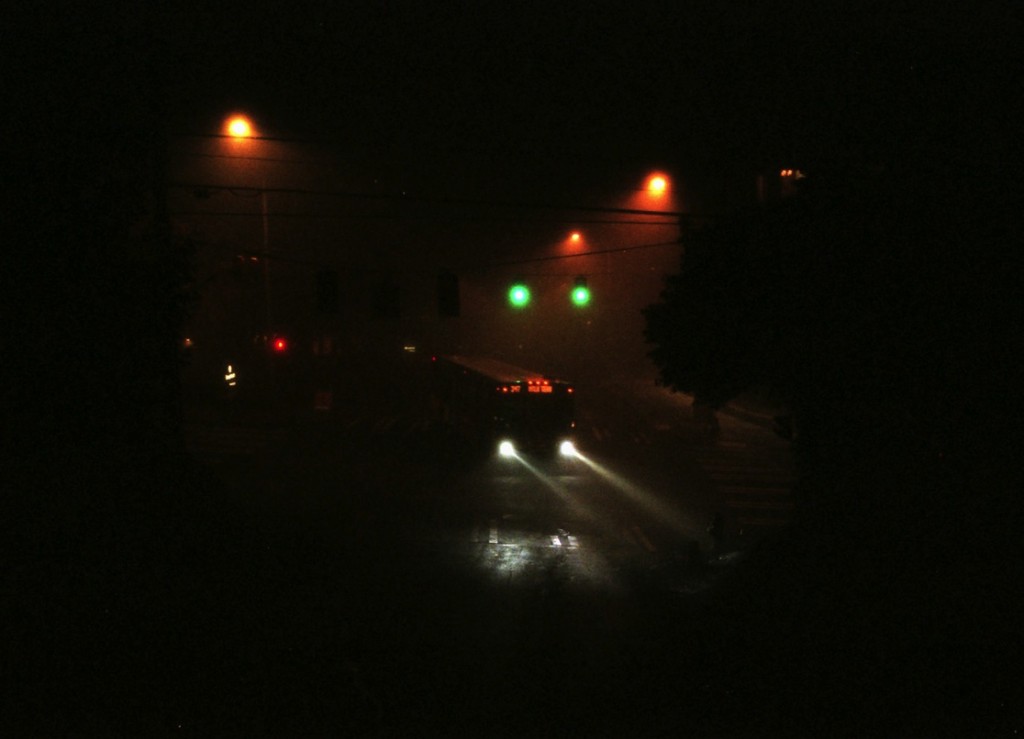 I realize in rereading this piece that it can be seen to function as a political endorsement. It was not intended as such, though I suppose I don’t have a problem with it being read in that light; more importantly, rather, it is offered as a truthful record of moments and conversation between a couple of fellows, late one recent evening.

I’m beginning my last trip on the 14. It’s a short run from Mt. Baker to 5th and Jackson. At the transit center on Rainier they come rushing over. I’d been holding for time in the silent nothingness of a Monday at midnight, but then they materialize, out of the last seconds, dashing across the street. I am useful now.

Like figures in a von Stuck painting they take shape as they come closer. All three are African-American men between forty and sixty, strangers to each other, shaded in muted hues of brown and blue. Here’s a man shuffling, his walker leading him out of the darkness. Another fellow, heavyset but agile, quietly smiling with his arms full. He’s carrying a huge box of dog food under one arm. Later I’ll offer him a night stop to save a few blocks on his walk home. The thin man is third, and the youngest, sharply attired in a fitted leather jacket and beret. In each hand is a bulging QFC paper bag.

He’s stressing, digging in his pockets for his transfer, trying to hold onto his QFC bags all the while.
“We’re still early, no rush.”

In my mind flashes a moment from earlier in the night: an elderly Chinese woman scurrying up to the bus at Maynard Avenue. “One more, one more,” she cried out. As she boarded there was every indication she did not have fare- her scruffy attire, the swarthy skin and odor of an alcoholic, the youthfully insolent manner in which she said she’d look for her transfer- all quite contradicting the studied presence and decorum of most of her east Asian contemporaries. I welcomed her on in, expecting nothing in terms of payment, only to be surprised later when she presented me with a crumpled scrap of H with an Orange border. “Oh, you’re wonderful! Thank you,” I said, silently chiding myself for making assumptions in the first place. Even if she didn’t have it- we all have our reasons.

As he settles in, Walker sings out, “hey when’s last 14 come out this way?”

I’m a believer in the idea that drivers should know the system. We are not boneheads, but professionals who can be expected to multitask and care about the service they provide. In the same way you expect a grocer to know where every last item is located, or a taxi driver to know every address in the city, I feel it is not unreasonable to expect a transit operator to know frequencies, major routes, last route departures, and so on. As drivers we’re not strictly required to know these things, but why not take pride in one’s work? Take pride in the responsibility that is expected of you as a professional. You can rise to that level. In the words of a straight-talking supervisor who recently spoke to a class of us drivers: “if you don’t know what bus goes to Harborview, you need to go get a job working somewhere else. If you don’t know what bus goes to U-District, Downtown, West Seattle… you have no business being here.” Harsh words, but sometimes you need to stretch a point in order to make one.

Having said all that, I only have a vague notion of when the last 14 is! Most of my bus knowledge comes from years of riding buses- definitely the easiest way to learn the system–but I’ve never ridden the last 14.*

“Um, they tend to stop around one. Lemme check it out to make sure,” I say, deftly grabbing a schedule from behind the timetable rack behind my seat. I hold it in my fingers as I drive, not bothering to try to read it- impossible without a red light.
“You lookin’ at the schedule?”
“Yeah, tryin’ to.”
Beret interjects, saying “here, lemme look at it for ya.”
“Hey man,” I say, “thank you for helpin out!”
“Oh yeah, well, somebody did me a favor, I may as well do someone else a favor!”
“Gotta pay it forward!”

They work out the timetables and continue chatting. I listen in as we cruise up 31st Avenue, approaching the Central District.

“What’s at you got there?”
“Spinach, bro,” answers Beret. “One seventy nine.”
“Where you shop at?”
“I used to stay out here.”
“Used to,” says Walker Man. I can’t read his meaning. Referring to the spinach Beret is now enthusiastically chomping down, he continues: “that’s just raw?”
“Oh yeah, man. You eat this with anything.”
I yell out, “makes you big and strong!”
“As’ right!”
“Just like Popeye!”

Somehow they get from spinach to the housing market. Beret is feeling good this evening. He looks at the rain on the glass beside his face and says, “some cities, everything just shuts down at night. But here, they got at least one bus, sometimes two buses, they’ll take you where you need to go. Maybe you gotta walk some, but they’re there.”

I’m tempted to join in, but the mellow night soothes me. I’m enjoying the role of quiet participant, observing the twists and turns of their nocturnal meanderings. They continue discussing bus service, in generally praiseworthy terms, when the 7 pulls alongside us at 12th and Jackson. It’s the great Sonum driving, one of the masters of the late-night 7, and he opens his window. Sonum and I used to ride the bus home together, and I’ve always enjoyed his humble, well-travelled humor and tireless work ethic. He believes in a just universe.

“Hey, Sonum!”
“Hey, Nathan! Wait for me at the stop, I got a guy wants to transfer!”
“Oh, I’m only goin to 5th and Jackson. Just 5th and Jackson,” I say to the concerned passenger face beside him.
“Oh, okay. Never mind.”

Afterwards, Beret says, “major props, man. Respect. I give you major props for that, sir.”
“Gotta look out for each other, right?” I reply.
“Oh yeah. Where I come from the frequency is good but oh man, so many times the bus is right there and it’a just drive away.”
“Oh no!”
“It’s a good system here.”
“I think so too.”
“Just hope they get that funding for you guys April 22nd.”
“Yeah, well. I hope folks come out and vote!”
“Yeah, gotta keep up the service. in fact, it should be add more service, not just keep it where it is. Add more buses.”
“Oh yeah. Well, it’s funny you should say. The guy who runs Metro is a cool guy, comparatively younger guy, from New York,”
“Oh! I’m from upstate New York,”
“Awesome. Yeah, real solid guy, wants not just to preserve the network, but ideally someday he’d like to just about double the amount of service on the streets. There’s even a plan for how to do it. ‘Cause you gotta match the growth that’s happening in this place.  ‘Course we don’t got the money for it now, but one day, you know, when the money’s right.”
“I see it. ‘Cause it’s a city on the upswing.”
“On the upswing, exactly. Other cities, LA, which is my hometown,”
“Oh right on,”
“When I’m down there half a everyone I’m talking to is people telling me they’re leaving. Here, people are coming to Seattle. You always run into somebody just moved here. It’s a city that’s goin’ places.”
“I just moved here.”
“Exactly. Welcome to Seattle!”

“Alright, I say, as the bus points toward base. Time for me to go home!”
“Major props, once again, for your attitude,” says Beret, from the lamplit brick sidewalk.
“Right back atcha!”
“I didn’t know it was gonna be the bus of people helpin’ people!”

He felt the warm glow of community, the democratic, equalizing notion of individuals considering each other as parts of a greater whole. Belonging. Here was that all-encompassing sensation that floods your system, the feeling of being comforted and empowered all at once. He walked into the night energized, beginning the final leg of the long trip home.

Editor’s Note: Nathan is a regular contributor to The Urbanist and runs his own blog where he recounts many more of his bus stories, be sure to peruse his archive at nathanvass.com.