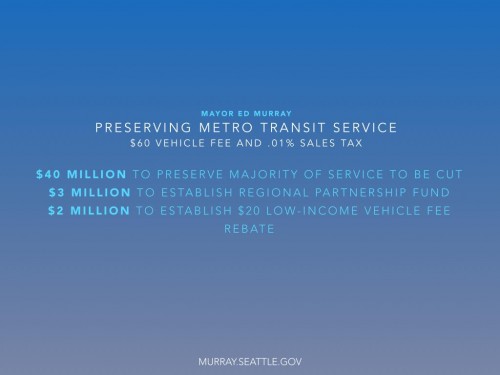 After a whirlwind week, the bus saga continues. Today, Mayor Ed Murray presented his blueprint for a Seattle-only measure to restore King County Metro Transit service in the city. The plan is very similar to the original countywide Proposition 1, which proposes to use a $60 flat car tab fee and 0.1% sales tax increase (the image above incorrectly notes 0.01%). During the press conference, Murray stressed the urgency of reversing the bus cuts and his plan:

When so many people in this city rely on transit for their livelihood, especially those with lower incomes, we cannot delay. We must act to preserve bus service in the city and on key intercity routes. And we know that this is what Seattle wants: two-thirds of voters in last month’s election said so loud and clear.

Under the proposal, the car tab fee and sales tax will raise $45M per year to reverse most service cuts in the city*, create a fund to cost-share cross-jurisdictional routes with neighboring cities (called the Regional Partnership Fund), and subsidize car tab fees for low-income drivers. The car tab fee would raise approximately $24M per year while the sales tax would raise another $21M. Low-income drivers will pay a reduced fee of $20 for their car tabs.

In the interim, Murray intends to have the City act immediately to stop all cuts to Night Owl routes like the 7, 49, 82, 83, and 84. Funding for Night Owl routes will come directly from the Seattle Department of Transportation budget. Metro had proposed the elimination of all Night Owl service beginning with the September 2014 service change.

Meanwhile, the Regional Partnership Fund (RPF) would have $3M to spend annually on cross-jurisdictional routes like the 215 (Issaquah-Downtown), 303 and 308 (Lake Forest Park/Richmond Beach-Downtown), and the 167 (Renton-UW).These tend to be peak-hour expresses to regional employment centers in the city, but also comprise many all-day Seattle routes like the 5, 131, and 372. Seattle would cost-share with regional partners to pay up to 50% of the cross-jurisdictional service, the remainder of which would be paid by that partner. Regional partners could be any other agencies, city, business group, or employer.

If you remember the crisis of last week, Murray initially opposed a Seattle-only option to save Metro. Murray was unhappy with the I-118 effort because of funding mechanism and the non-regional nature of the legislation. Universal pre-kindergarden, the primary policy issue of the Murray administration, uses the property tax as its means of funding. Murray was concerned that the additional property tax measure of the Metropolitan Parks District, publicly funded council races, and I-118 could compound to cause voter fatigue in the fall. (Though there is no evidence to suggest that that is true.) At the same time, Murray argued that Metro is supposed to be a regional service, not just a local one. In Murray’s words, a Seattle-only measure could lead to the “Balkanization of Metro”. However, the Office of the Mayor began to change their tune late last week to support a Seattle-only package, which lead I-118 petitioners to suspend their effort.

This program provides a clear path for jurisdictions to obtain more local transit service, as a bridge to keep buses on the road until we can get permanent and sustainable revenue authority from the Legislature for the regional system. Until the Legislature acts, I cannot ask cities to accept cuts they are willing locally to prevent.

Cities must pay the full operational and capital costs of that service because King County will not cost-share for any restored hours. An agreement to restore service must be approved by the County Council and Executive.

Assuming Seattle does restore service hours to Metro, the first opportunity to do so will only be in February 2015 meaning that currently proposed cuts will still go through in the September 2014 service change (excluding the Night Owl routes). Constantine and Murray intend to continue their effort to champion a countywide option for funding Metro next year. Assuming a countywide measure is able to later rescue Metro, the proposed Seattle-only measure could be phased out in as little as 2 years.

While Murray’s plan seems comprehensive, there’s still ample opportunity improve the transit package. The City has a number of other tools in its arsenal besides the car tab fee and sales tax. Goldy over at the HorsesAss gave us two such options last week: increasing the parking tax and bringing back the head tax (assessed on employees who drive solo to work). Both options could be enacted councilmanically instead of going to the voters or the Transportation Benefit District process. Councilmembers have already stated their strong support for reversing Metro service cuts and that they are open to any and all ideas. We hope that they will evaluate all options in addition the Mayor’s proposal.

Any measure that uses the sales tax and car tab option must be approved by the Seattle Transportation Benefit District Board (composed of the full City Council) with a deadline of August 5th in order to appear on the November ballot.