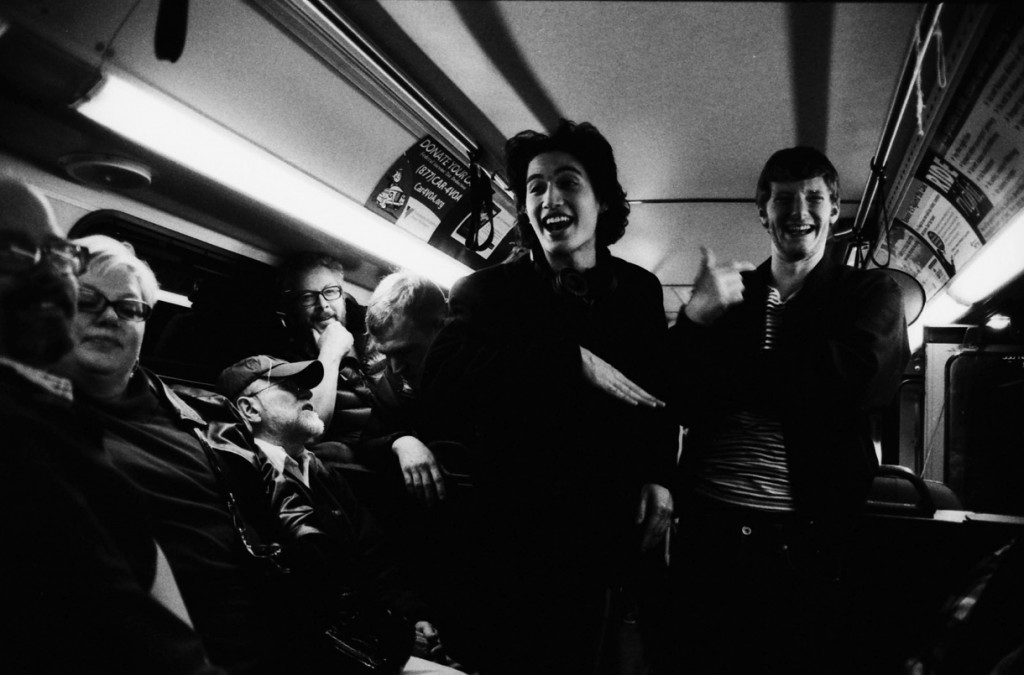 A young man on the other side of Jefferson makes a noise. It’s Jermain (from here and here, among other stories). He yells a quiet hey from across the street, and I’m happy to see him. Great. I get excited when young people show a buried promise, and you can wonder at what considerable accomplishments they have in them to achieve in the future.

Several hours later, as I pull into Third and Virginia southbound, mulling over how the zone feels like a landing strip because of how huge the sidewalk is, I start lightly tapping the horn- it’s Genevieve!!! In the living breathing flesh! She’s a nurse at several Swedish’s, and used to be something of a regular; I haven’t seen her in over a year. Here she is again, out of the blue. The multiple exclamation points really are necessary; her ebullient energy is infectious. I ask her about her twelve-hour night shifts, her multiple degrees, other interests, children, and her passion for burlesque… and how it is that she still has room to be happy. We get to talking, and both of us are very excited. We both suffer from the same problem of looking ten years younger than we really are, and are able to commiserate on such matters. At James and Third I see Jermain again at the zone, and I’m excited to say hey once more; but I focus on the individuals getting on in front of him, making eye contact with every person in the crowd, knowing I’ll get to talk to him in a minute. Each person needs that moment of contact, however brief. The difference between a short second of eye contact and a slightly longer moment is not so great; the difference between eye contact and no eye contact is vast.

The last guy steps on. It’s a young black American teen with basketball shoes and a T-shirt that’s too big, so far so good… but wait! Who’s this kid? That’s not Jermain! Just a lookalike!

Where on earth is the guy? Is he still at the zone? Maybe, as there’s still a few fellows loitering around. I want to get out of the seat, lean out the door and yell, “Jermain! As-salamu alaykum!”

I don’t do this. Instead I mutter darkly, “why isn’t Jermain on this bus?” as Genevieve and I resume our conversation. Later, I’m puzzled. Why didn’t I lean out the door and say hey? Why? What makes us hold back from ourselves, from the actions we know we could perform and share? Why do we avoid interactions which we have every confidence will go over well? It’s not like I would have made a fool of myself- okay, maybe I would have, but who cares? Not in this instance. What strange virus is this, that forces timidity where there is no reason for it? I feel lame afterwards. I resolve to be more open with myself.

I pull into Third and Pike, notice the wonderful tiny old Filipino woman, Rose, and pull way beyond her to the head of the zone to load passengers.

As soon as they’re all onboard I, in a moment of utter overcompensation, completely step off the coach, and yell down the zone, through all the people: “ROSE! ROSE! HAVE A GOOD DAY!” She’s confused, then thrilled, as she pieces this bizarre situation together. She returns the wave as energetically as her aging arm is able.

Continuing in this vein, I embark on a waving bonanza. At 21st & Jefferson, I arbitrarily wave for no reason at a man waiting across the street. I guess I’m banking on the fact that he knows me, or that he’s into waving at strangers. He returns the wave.

I’m announcing an upcoming zone, and my hands are full with holding the mic and the wheel, but I see a man with a walker on Third looking up at me from the sidewalk. We’re nowhere near a zone, and he doesn’t want to get on; he just seems likes he wants to wave. His hands are full too, maneuvering his walker. In the midst of announcing, I give him the upward-head nod and smile, and he returns it with a nod to the skies and down again, a face of joyous mock surprise.

The energy is flowing. “JAGPAL,” I yell, upon seeing Jagpal across the street, driving the 358.

Sometimes this openness falls completely flat. I’m inbound at Seneca now. A young businessman in his thirties, dressed in a navy oxford and black slacks, steps forward, preparing to get off. He has earphones in.

I glance at him in the mirror and say, “How’s it goin’?”
“Whhuuu?” he intones, taking out an earpiece temporarily. He gives me the face I probably make when I’m in foreign countries and people are yelling at me.
“Just sayin’ hey, nothin’ major,” I answer.
After a pause: “Ooooohhh.”
“What are we listening to?”
Dead silence.
A lady nearby and I burst out laughing together- she says, “he can’t hear a damn thing!”
“Must be some pretty good tunes!”

The man’s earphones are back in, and he doesn’t hear a word of our cacophony. He’s the 21st century zombie: slick, fast, well-groomed, and completely and voluntarily deaf. He goes racing down the street, a man on a mission.

Another wave at a middle-aged Latino man walking on a street somewhere in the Judkins neighborhood. His stance seems to say, “it’s that crazy bus driving kid who waves at people.” It works again as I pass by the dealers and users at Parnell’s, the mini-mart at Dearborn. They’re notoriously unresponsive when it comes to interaction, but today one of those faces transforms into a beaming grin, bloodshot eyes relaxing around the corners. Another fellow in a wheelchair offers a lazy salute.

Continuing through the Judkins area, a petite young lady kneels down by her dog as I pass by, returning my friendly demeanor with a bright smile.

While I’m in the mood, not quite knowing what’s come over me, I wave yet again- an extended fist way too much like a black power salute- at a man and his friend hanging out in the parking lot adjacent to the Center Park project housing at MLK and Walker. I definitely don’t know these guys. It’s completely random. There’s no reason for it. It doesn’t make any sense. They return the wave, getting excited, new smiles where there were none before.