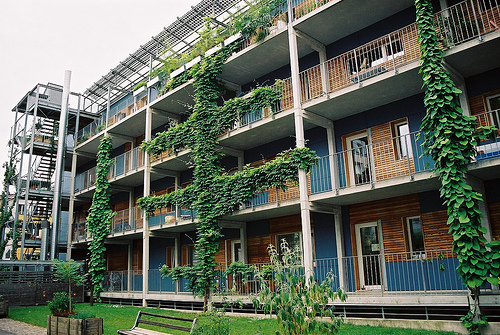 Editor’s Note: This is Part 6 of a series on Baugruppen, private owners collaboratively building affordable multifamily projects. Read Part 1 or check out the series.

So, how is it that baugruppen seemingly excel on the community cohesiveness and livability front over turn-key projects? I think there a few moving parts to this. As noted, baugruppen tend to form or ‘market’ around specific concepts or values, cities are pushing and rewarding diversity and livability of BGs, and the arduous, multi-year democratic process undertaken to actually construct the cooperatively-owned project seems to bring about cohesiveness as well (yes, that’s right, multi-year, as in 2+ years. Time is the largest advantage a turnkey project has over BGs).

There are a number of ways baugruppen are formed – some are initiated by friends or acquaintances that already share a common bond or set of core values. Others need additional members, and declare a strong central concept (bikes only! DINKS ok! Intergenerational granola-loving families!), a rallying cry for those that may be interested in joining up.

Through various online portals (including cities keen to advance such developments – hint, hint Seattle), community meetings and word of mouth – groups are completed. Of all the projects I’ve looked at, the FAHRRADLOFT seems to do this rather well (or maybe just hits at the type of BG in which I’d like to dwell – unsure!).

This is an important step in the process – declaring what you are about, be it uber-green living, diversity, gardeners, etc – a project won’t get built if it doesn’t get enough members. The big advantage in both of these scenarios is that you know, or will soon enough, who your neighbors will be at project completion. Along with the stated concept is the obligatory group photo and/or groundbreaking!

Once formed, a large amount of community buy-in must take place. To actually build a baugruppe is no small feat. Like co-housing, the design process of many baugruppen is driven by future tenants. Concepts, themes and ideas are developed, processes are formulated to move project planning forward. The land situation must be worked out. Architects work with the owners on the design – both groups bringing needs and constraints to the table.

This is not usually the case with developer-initiated projects. However, on the best projects, it is this close collaboration with clients that really drives success. There has to be consensus amongst the members to move forward, schedules have to be maintained. This is a process of give and take – actual democracy in action!

Though the process may take more time (e.g. weekly meetings for up to and over a year) and definitely involves challenges (There should be bike storage! The stairs should be yellow!) – it seems like a great way to engage with your future neighbors while formulating a building that meets your needs in a way other models can’t or won’t.

Imagine having a say in whether or not your building would have a roof terrace, or how your building engages the public! Want to implement ecological and social requirements for a project? Then do it! How about prioritizing car-free living like in Vauban? Go for it! This process seems to induce a greater sense of pride, respect and sense of community than other models – perhaps owing to the greater degree of trust and respect garnered through the planning process.

Cities can also play a large part in the success of baugruppen. As previously discussed, there are a multitude of advantages for cities – solid taxes bases, affordable housing, increased density, diverse citizenry to name a few. Because of this, many jurisdictions go out of their way to not only promote BGs, but encourage stronger forms of them. They do this through the sale of city land to the group deemed most diverse/ecologically friendly/kid friendly/etc. They also do this through the appointing of facilitators, promotion of projects – built and in planning, and maybe more interestingly, holding the sale of city land while a BG gets it’s planning figured out and funding in order. Yep, you read that right – some jurisdictions are so gung ho for baugruppen, they’ll delay the sale of land to ensure the project is done right. Talk about winning on all fronts!

Mostly, though, I think it’s the intentional [urban] community that forms – a close knit bunch that looks out for each other, works together, genuinely cares about the place in which they dwell. Is this a critique on contemporary urban dwelling? Is affordable communal dwelling, then, the biggest advantage to baugruppen? I believe it is. Yes, there is the opportunity for long term financial benefit through reduced construction costs/loans and operational energy (passivhaus) – but it is the communal aspect of BGs that seems to drive success larger than anything else. Per the NYT article on roedig.schoep stunning A52, ‘Mr. Roedig and Mr. Schop point out that they live in the building, not just their own apartment. The building was designed to be a kind of modern-day kibbutz.’ So… Maybe it doesn’t take a whole village… Maybe it just takes a baugruppe. With a community garden. That needs a little water.