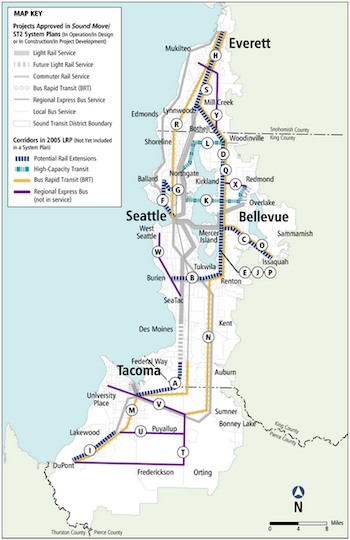 Nudey cyclists, bike trains, and more: Get ready, today the nudist cyclists hit Fremont streets. KOMO reports on adorable story about bike trains for kids in Southeast Seattle. Out of nowhere, the Seattle Times editorial board came out in favor of the Westlake Bikeway. $2.4m was awarded to a cyclist in Philly for getting “doored”. Greater Greater Washington gives an honorable mention to the Broadway Bikeway because of the artistic bollards–although we’d trade those any day for planter boxes. Good news though, 500 people are using the bikeway each weekday. 5.4 miles of new Neighborhood Greenways will be rolled out this year. Baby Boomers are actually driving a huge share of new cyclists.

Historic preservation flipflop: A Capitol Hill property changed their tune in less than a week from “we want to protect our buildings, we don’t want the evil developers to drive us to redevelop” to “let’s knock the buildings and take the cash“. In any case, it’s doubtful that these buildings would have been considered of historical merit anyway.

Interactive maps: Design your own bus system any way you want and find out the time, cost, and number of buses required to operate a route. Enjoy cities in 8-bit, including places like New York, Kyoto, Boulder, and even our own Seattle.

Not just a political divide: It looks like education attainment levels a very strong indicator of where people choose to live, whether urban, suburban, or rural. Although, StreetsBlog asks if young conservatives might change the philosophy of their party on cities.

More on design and architecture: CHS takes a quick look at 8 projects in Capitol Hill and the historic preservation overlay. Wuhan, China has plans for the world’s tallest towers, and they look similar to the Eiffel Tower. Lund, Sweden has some pretty swanky and colorful railway pedestrian bridges. Take a tour of Brazil’s most treasured stadium. In two short weeks, this modular apartment was constructed right here in Seattle! And boy do I wish this were the government office that I actually worked in–maybe there’s hope for the future.

Two sides of Detroit: Wanna bid for a new home and save the neighborhood from blight? You can do just that in Detroit right from the comfort of your computer. Meanwhile, vacant properties in Detroit are helping to reforest the city and reduce the incidence of allergens. So there’s that.

Motorized transport: Mayor Murray issues a compromise for the rideshare, taxi, and for-hire cab industry. The Seattle Transit Blog looks into service additions to Community Transit and Pierce Transit that are coming on line this year, why to get involved in Sound Transit’s long-range plan update (take the survey here), and evaluates 520/Eastside alignments for future light rail. Tacoma Transit argues for Tacoma-Bellevue Sound Transit Express service. It looks like there might be a growing coalition to institute a 12 cent increase in the national gas tax. The worst US cities for driving (like Seattle) also tend to be the best cities to live in. And City Lab makes the case for getting rid of the park-and-ride lot and replacing it with mixed use development.

Copycats: Minneapolis has hired James Corner Field Operations–chief planning firm for the Seattle Waterfront project–to redesign a very dull pedestrian mall in their city. The plans are very clean and likeable, which is not surprising considering that JCFO knows how to deliver awesome project concepts over and over again.

The city is for kids, too: Enrollment in the Seattle Public Schools has been increasing rapidly since 2007; growth in the number of students has nearly reached 16% since that time.

Intercity rail: California made big news by dedicating 25% of the proceeds from cap-and-trade to funding the construction of the California High-Speed Rail. A Texas company thinks that they can make it big with a private high-speed rail venture in central Texas. And similarly, All Aboard Florida plans to launch private passenger rail service in 2016 from Miami to Fort Lauderdale, West Palm Beach, and Orlando.