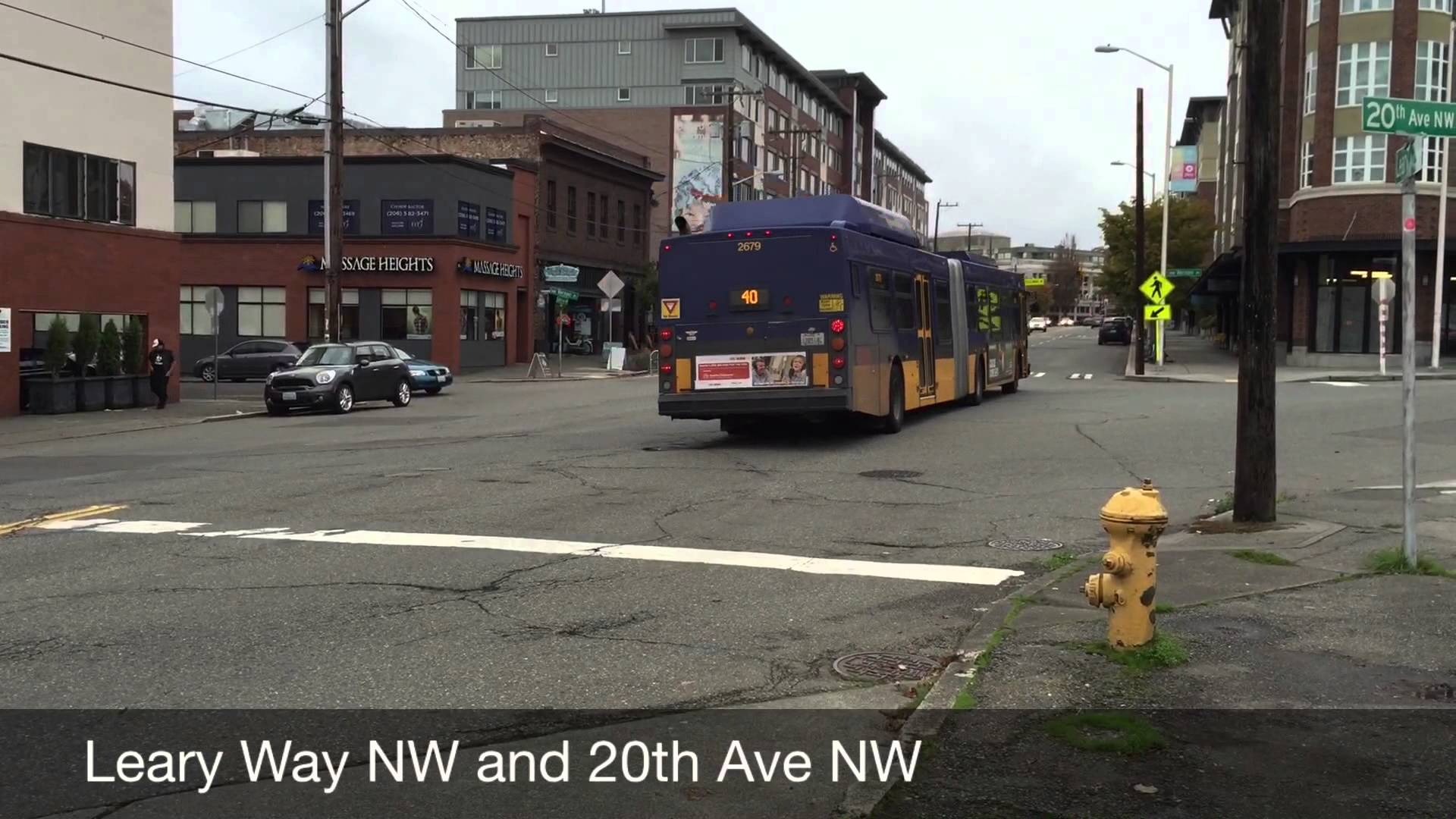 On Saturday morning, I met up with a few friends in Ballard to talk urban issues. Most of the discussion naturally centered on the neighborhood itself. We decided to take a walk around Ballard to see what has changed, the challenges that it faces, and ways we thought it could be improved. One place on this walk stuck out: the corner of Leary Way NW and 20th Avenue NW. We immediately noted how dangerous the street was for all users.

For those unfamiliar, Leary Way forms a diagonal street (a northwest-southeast street) that is bisected by 20th Avenue NW (a north-south street) and NW Vernon Place (a southwest-northeast street). This creates a situation of the five-way intersection. Leary Way is the largest of these streets with a right-of-way in excess of 100 feet while NW Vernon Place and 20th Avenue NW are 50 feet and 66 feet in width respectively. 20th Avenue NW effectively acts as a secondary street while NW Vernon Place is much more local in nature. Speeds on Leary Way are relatively high since it has four wide travel lanes, limited vehicles parked on-street, and effectively no singnalization between 15th Avenue NW and NW Market Street (a half-mile stretch) to slow traffic.

Because of the five-way nature of the intersection, the turning radius for most block corners are quite wide, which impedes the safety of pedestrians and increases the distances that they must walk. At the same time, vehicular traffic must traverse long distances within the intersection to cross Leary Way to any point off of the arterial.

For this half-mile stretch of Leary Way between the signalized intersections, only two marked crosswalks are located on the street; one at the junction of Leary Way, 20th Avenue, and Vernon Place (this being located on the north side of the intersection) and a second crosswalk just northwest of the first. Per state law, every intersection of streets is a legal crossing point for pedestrians, but it’s clear that pedestrians are discouraged by design from crossing Leary at most points despite ADA ramps from the curbs.

In the instance of the five-way intersection, it has been revised recently. In the image below, the crosswalk used to be placed toward the middle of the intersection. However, SDOT has relocated it to the northwest. Pedestrians are effectively encouraged to walk around the whole intersection as opposed to crossing it in the most direct way possible. So, if someone wanted walk from Senor Moose Cafe to the Olympic Athletic Club, they would be wise to walk across 20th Avenue, Leary Way, and then Vernon Place to reach the gym. Crossing the shortest distance is a treacherous option at best (and you can see one gentleman in the video below who brazenly darted across the intersection).

It’s not just pedestrians that suffer from this street design, drivers have their own challenges, too. Wide lanes, minimal traffic control devices, and a confusing intersection lead to poor results. Leary Way’s layout inherently induces speed, and that perhaps was the most significant issue for drivers. Near collisions with cars and pedestrians was a common sight at the intersection for two reasons.

On the one hand, drivers would proceed quickly in both directions of Leary Way up to the crosswalk only to slow or stop abruptly when a pedestrian appeared in the intersection or any of the adjacent intersections. On the other, drivers would dart across Leary Way from the bisecting streets whenever a rare opportunity was presented. In the process, these cars were often short of clipping–or being clipped by–another car. As noted before, Leary is a wide street and traversing it quickly is important in order to avoid oncoming or crossing traffic.

One awkward circumstance for drivers was the crossing from Vernon Place to the northern section of 20th Avenue. Watching drivers attempt this crossing was fascinating because it almost seemed as if there were an invisible roundabout in the middle of the street. Instead of driving straight across the intersection, drivers had to deviate south and right across the street in order to avoid drivers on the opposing side of the intersection, and then proceed north and left.

As you’ll see in the video, the intersection isn’t working. It’s a safety hazard to both drivers and pedestrians. And, if it’s dangerous for both of these groups, it has to be even worse for bicyclists. I asked staff from the Seattle Department of Transportation (SDOT) to take a look at the footage of the intersection. Staff indicated that SDOT is already in the process of exploring solutions for this intersection as part of the Ballard Greenway on 17th Avenue NW.

One potential outcome of the Ballard Greenway project would be the rechannelization of Leary Way. Hopefully this would be more than just paint on the ground–that’s already been done and it isn’t much of an improvement. A menu of options should be considered like creating a roundabout, extending curbs to choke traffic, adding more crosswalks, signalization, and removing a travel lane in each direction. What are your ideas?

Note: I did speed up most of the film to double speed, but you can get the jist of my three minutes on Leary in just under two minutes.