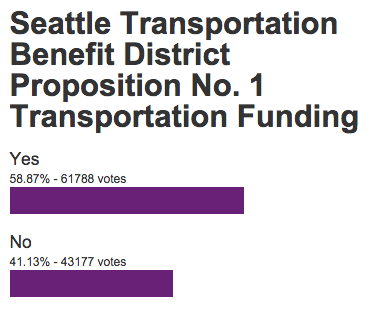 At this point, you’d pretty much have to live under a rock to not know that Republicans have taken control of both chambers of the US federal government, but maybe you missed out on our little corner of the world. Last night was mixed to positive for urban dwellers. On the one hand, the Seattle-only bus measure is passing soundly with over 58% of the vote in favor; on the other hand, Republicans will hold control of the state Senate, which has serious ramifications on funding for basic state services and meeting the education requirements stipulated by the State Supreme Court’s McCleary Decision. So here’s our brief rundown of local and state measures (and sole interesting Seattle judicial race).

Seattle Citizen Petition 1 concerning the creation of a monorail authority: 80% No

City of Seattle Proposition 1A and 1B concerning early education: 65% Yes, 67% 1B