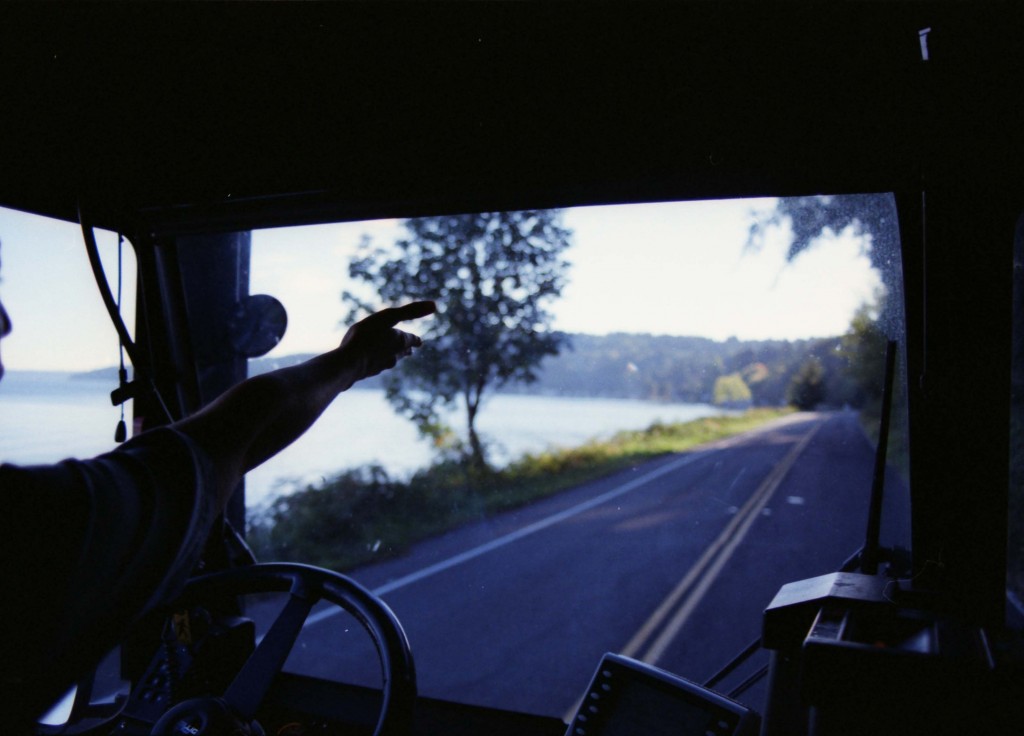 “Don’t get on!” says the other driver to the passengers. She’s brought me her bus at the end of her shift, for me to take over instead of continuing with my own broken bus. A coach change, as it’s called. “Should I let ’em on?” she asks me, as I get my things from the broken bus and prepare to board the new one.
“Oh, sure.”
“Okay, you can get on!” she hollers, leaving with the defective coach shortly thereafter. I saunter onto the new coach with the last few straggling passengers. The interior lights are turned off, and it’s dark tonight. Everything’s pitch black, save for the subdued orange glow from the sodium vapor lamps outside.

“I like it like dis,” says an older gentleman up front, dressed in a sports jacket and shades. I’ve never not seen him wearing shades. “Yeah, man. It makes everything kinda sexy!” He drawls out the last two words for maximum effect, to agreeable giggles all around. Kiiiinda seeexehh.

“You should do radio,” I tell him. “You got the voice!” He and others nearby continue chatting, brought together by the anomalous situation of Stealth Mode. The people seem unusually excited by my willingness to bend the rules– not a big surprise, I suppose, but this isn’t the same as letting people ride free or get transfers. The thrill has a different root.

They’re not benefitting in any way.

Tonight there is simply the innocent excitement of doing things a little differently, of getting to be here for this moment, unlikely to be repeated. Those parts of life you tell your friends about, and you can tell it doesn’t quite translate; maybe the ephemeral joy was too small, too precious, not quantifiable enough to be a story. But you were there, and it was kind of wonderful. The street woman in the chat seat thanking me now for being “awesome” is referring, I think, to the sense of equality she feels, the easy willingness of me to engage the crowd as a friend, not an authority figure. It’s not really the lights. It’s her and I joking around, the latent respect, unspoken but real, friends leaning back on the front porch chairs. Do you ever get that sensation of the yearning for belonging satisfied, an acceptance that sends tingles down your spine?

Passengers get on as we continue through town as a 49. Some are nonplussed. Others get revitalized, echoes of playground excitement on their faces. The hipsters try not to act surprised; others actually don’t seem to notice, which makes me smile even wider. The street folk are delighted– lights off plays a little better to the 7 crowd than the 49 crowd, but we’re all into it. I make an informational announcement in any event, just to let these new people know that I’m actually sane.

“Just want to let you know we’ve got the lights off tonight,” I say, trying to figure out on the fly how I’m going to explain this. “When we were on the 7 part of the route some of us thought it would be, uh, ‘kind of cool,’ to turn off the lights… of course let me know if you want the lights on again, I’m happy to turn the lights on… welcome aboard the 49, everyone….”