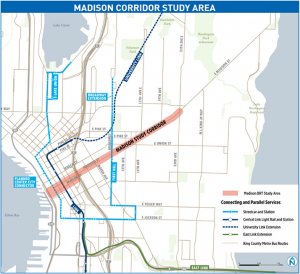 This past Wednesday and Thursday (November 19th & 20th) Seattle’s Department of Transportation (SDOT) and their consultants from Nelson\Nygaard held a number of neighborhood workshops as part of their public outreach for the Madison BRT project.

The workshops were divided into the Madison/12th Avenue neighborhood, First Hill Neighborhood, and the Downtown Madison Corridor Business/Hospitality community.

Currently, the Madison BRT project is in the early stages of developing two design alternatives for the corridor which will then be further analyzed. The purpose of these neighborhood workshops was to involve local stakeholders who are most familiar with the route in helping define the parameters of these two design alternatives.

The workshops mainly focused on three aspects of this potential, future upgrade of the Route 12:

This was an exercise to help inform how the new Bus Rapid Transit line should look. Are there significant architectural, historical, and cultural influences present in the corridor that could help define the character of the line from the branding of the vehicles to the design of the stations and other street-level amenities. This included discussion of neighborhood character, historic landmarks, and institutions along the route.

In a typical application of Bus Rapid Transit (BRT), the bus stops (or stations in the parlance of BRT) are spaced further apart than a local bus route in order to provide faster, more efficient service. In the context of the Madison Street corridor, specifically from the Waterfront through First Hill, this will not be the case. The change in elevation is a greater influence than any potential speed increase might provide; therefore, with a few exceptions, most of the existing Route 12 stops will be retained.

In order to remove potential conflict with the Center City Connector Streetcar line on First Avenue, the turning loop for this line will be moved to Western Avenue. This location is also where a new stop serving ferry commuters will be located, supplanting the existing stop on Marion Street between First and Second Avenues.

On the First Hill portion of the route, the initial plan is to locate stations at Eighth Avenue, Terry Avenue, Boylston Avenue and 12th Avenue. The preliminary locations have been chosen in order to align with Neighborhood Development Plans, provide level access to medical institutions, create better connections to north-south services such as the First Hill Streetcar, and to accommodate the additional station amenities.

Both options will utilize right-hand door boarding so that stations may be shared by Routes 2, 11, and 60 where the local bus lines overlap the BRT line. Regardless of the location of the bus lanes, this project will necessitate the removal of all parking on Madison Street. Fortunately, there are existing entrances/drop-off locations for all affected buildings located on adjacent side streets.

In order to mitigate some of the traffic/parking issues along this segment of Madison Street, the project will also look at making changes to some of the side streets that intersect with Madison Street in order to help improve traffic flow, create commercial loading zones, and to increase the overall number of parking spaces.

One of the more interesting ideas that came out of the Downtown Stakeholder workgroup is the potential of moving the downtown, eastbound portion of the route from Marion Street to Spring Street. By running the buses East on Spring Street from Western Avenue to 9th Avenue, the line could make use of the transit improvements (exclusive bus lane, queue jumping traffic light, etc.) that are already being planned by SDOT on Spring St. for Metro’s Route 2.

Ninth Avenue already has the required electric trolley bus infrastructure present and would only require slight modifications for the bus to turn left onto Madison St. Moving the Eastbound portion to Spring St. would also remove the existing complicated, congested segment along 6th Avenue from Marion St. to Madison St.

This potential Spring St. alignment provides for better access to the Center City Connector Streetcar, University Street Downtown Transit Tunnel Station, Third Avenue Bus/RapidRide lines, the Central Library, Town Hall, and the numerous existing and planned residential towers on the west side of First Hill. This alignment change would still provide equivalent access to/from the Ferry Terminal requiring passengers to walk one block North on Western instead of one and a half blocks East to the current 1st Ave stop.

While the purpose of these workshops were to help inform the process and not make any firm decisions, there are a number of important questions that still remain to be answered. While there are some obvious benefits from overlapping local bus routes, i.e. shared enhancements to the right of way and stations, there is still much to be determined with regards to how this BRT line will integrate into the existing Metro bus system if this line is in fact implemented. In conversation with David Seater after the workshops, he shared his concerns that many important questions were as of yet unanswered:

As the project is still in the early stages, these questions will undoubtedly be answered, but the apprehension of the various affected communities is more than understandable after the recent battles over funding for King County Metro. Now that funding for Metro has been stabilized, at least for the City of Seattle, these questions and concerns will hopefully be answered quickly and succinctly.

Special thanks to Maria Koengeter and the rest of the folks at SDOT, Nelson\Nygaard, et al for their work thus far and for providing this opportunity to help inform the development of the Madison BRT line. Continued community neighborhood/stakeholder involvement in this project will be an important factor in the line’s development and future success. As the Madison Corridor will be facing unprecedented growth over the coming years, projects such as this will be critical for the communities affected.

Full disclosure: I am a resident of First Hill and a member of the First Hill Improvement Association Transportation Working Group.