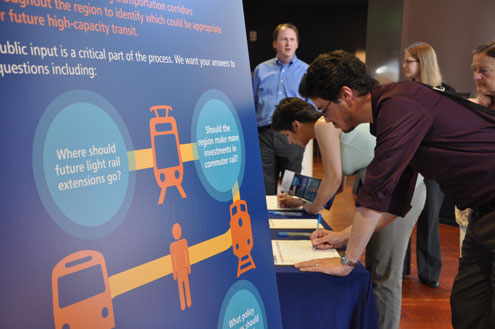 Yesterday, the Sound Transit Board held their final meeting for 2014. There was a lot on the agenda in order to close out the year, including: an agreement with Amtrak to operate along Sound Transit-owned trackage in Pierce County, adoption of the 2015 Service Implementation Plan, and a presentation on improving wayfinding and signage. However, the most significant items that transit nerds will care about were the adoption of an updated Long Range Plan and approval of the 2015 Budget.

The Sound Transit Board approved a $1.2 billion budget for 2015. Highlights of the Board’s budget include light rail construction, fleet replacement and retrofit, and implementation of new Route 580. The 2015 budget will include $932.9 million in anticipated revenues while expenditures are projected to be $1.2 billion. Sound Transit currently has $155 million in unrestricted cash on its balance sheets, which will fund the lion’s share of $280.0 million spending gap. Additional revenues will come from the Capital Replacement and Emergency/Loss reserves, which is projected to cover another $48.4 million. The agency projects that up to $173 million in bonding will be necessary to meet its obligations for 2015, largely due to capital investments, not operations.

Sound Transit is poised to see record ridership growth in 2015, while staying on track for the early, under-budget completion of light rail to the University of Washington and rollout of the next rail expansion plan.

Service-wise, there will not be too many changes, but Sound Transit does have 2,000 unrestricted service hours to allocate toward overcrowded buses, largely on the Eastside. Sound Transit will begin a new Sound Transit Express service designated as “Route 580” funded under the new budget. The route will operate from Lakewood Station to Puyallup Station via SR-512. The route is focused around providing access to connecting Sounder trains to/and from Puyallup neighborhoods and Lakewood when not serviced by Sounder trains. The route is peak-oriented with only 20 daily trips, and would replace Pierce Transit Router 495. The success of this route will be interesting to watch over the next year.

There were some major capital expenditures allocated through the budget, largely for light rail expansion and completion work. These biggies include:

After a year of engaging the public, collaborating with municipalities and other agencies, and talking about what should be in an updated Long Range Plan (LRP), the Board finally adopted a final version that will guide Sound Transit’s investments in new services and facilities over the next 20 years. The decisions were not easy as there were so many good ideas for future investments by the agency, but choices had to be made.

One of particularly contentious text amendments amongst the Board was T18, an amendment to study a second tunnel in Downtown Seattle for high capacity transit. Boardmembers Mayor Ed Murray and Councilmember Mike O’Brien sponsored the amendment to the LRP. Board members were not favorable to the language, which seems odd considering that the concept appeared to be very practical. Specifically, the amendment as proposed said: “In addition, as part of implementing a regional transit system, Sound Transit can explore policy and funding alternatives to address significant regional facilities such as tunneling for future core system capacity (through Downtown Seattle); operation, maintenance, and storage facilities; and transit vehicles.” During the voting on this amendment, Mayor Murray was shockingly absent having left for a separate press conference. Ultimately, T18 lost on a 6-to-8 vote, and therefore failed to be included in the LRP.

Despite this, Seattle received many favorable text and map amendments. A big coup was the Sand Point Crossing. While a map amendment was neither proposed nor adopted for a Sand Point Crossing, the Board did adopt two text amendments, T25 and T23, to keep the corridor concept alive. The language adopted for T25 calls for a study to examine cross-Lake Washington high capacity transit options, subject to a caveat that demand on existing cross-lake transit options or future East Link exceed capacity. A study under T25 would examine alternatives like SR-522, SR-520, and Sand Point-Kirkland. Meanwhile, the language of T23 recognizes that there were significant comments and efforts for specific alignments of transit investment during the SEPA environmental review process. The vague language leaves open the door for Sound Transit to study corridors like the Sand Point Crossing and others that were popular during that process.

Boardmember Dave Earling (and mayor of Edmonds) removed map amendment M16 from the Board’s consideration. This proposed map amendment would have added Corridor No. 24, which was a proposed high capacity transit (HCT) corridor from Downtown Seattle to Edmonds via Ballard and Shoreline Community College. While this was not added, the Board left intact the HCT corridor from Downtown Seattle to Ballard. Meanwhile, map amendment M2 was adopted by the Board. M2 is the proposed Downtown-to-West Seattle/Burien HCT corridor known as Corridor No. 2. This means that the long-desired Ballard-to-West Seattle light rail alignment is now a viable project corridor.

Seattle also had two further map amendments up for discussion by the Board that benefit the city. The Board adopted map amendment M5, which consists of Corridor No. 8 and Corridor No. 30. These corridors are essentially the Downtown Seattle-Madison Street corridor that the Seattle Department of Transportation is currently exploring for bus rapid transit. The map amendment strikes language requiring light rail investments and instead replaces it with the more general HCT designation. The last map amendment for Seattle was M26, which is Corridor No. 40. This corridor upgrades the potential investments slated for SR-522 regional express bus service by including the option for bus rapid transit treatments along NE 145th Street.

Snohomish County was successful in getting both of their proposed map amendments adopted by the Board. Map amendments M8 (Corridor No. 13) and M3 (Corridor No. 4) add a new light rail corridor from Lynnwood to North Everett. M8 is intended to provide an option to directly serve Paine Field along the Lynnwood-North Everett alignment.

If you’re wondering what happened with South King County, the answer is basically nothing. While Corridor No. 2 may provide HCT from Downtown Seattle to West Seattle/Burien, South King County still has plenty of other unfinished investments that could be made by the existing corridors identified on the LRP.

UPDATE: Chris Karnes over at Tacoma Transit has further details on Tacoma Dome to Tacoma Mall light rail from the LRP.