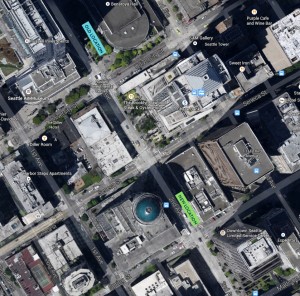 By now, you’ve probably read about or seen those green bikes roaming the streets of Seattle from the bikesharing service Pronto! Launched in Fall 2014, 50 stations in Downtown, Capitol Hill, the U District and the neighborhoods in between allow users to purchase a membership, take a bike and ride it to their destination and then return it to any station in the city. Pronto! worked with the City of Seattle to put stations in locations that would be convenient for riders and encourage people to use the service. However, one recent decision to relocate a station brings to question Pronto!’s commitment to these convenience and usability goals.

Pronto! staff recently decided to relocate one of their bike rental stations located on 2nd Ave between University St and Union St, right at the footsteps of Benaroya Hall. The spot was ideal for a bikeshare station because it had the benefit of direct access to both the University Street Station (Downtown Seattle Transit Tunnel) and 2nd Avenue Cycle Track. The location was incredibly convenient for tourists and regular transit riders using the station. For anyone exiting the station, they would notice the Pronto! bikes and could hop on a rental bike to be on their merry–a truly multi-modal way through Downtown Seattle.

The 2nd Ave and University St location was initially approved by the City for the original rollout, but Pronto! decided to move the station due to a letter of concern. With the Garden of Remembrance immediately adjacent to 2nd Ave, the board that manages the space requested that the station be relocated. When asked about the decision, Pronto! staff said that the bikeshare station disrupted the peaceful and contemplative nature of the garden. Pronto! staff reasoned that they wanted to respect the Garden of Remembrance and be sensitive to community sentiments. Ultimately, they decided to satisfy the request.

Meanwhile, the new bikeshare station is located two blocks south on 2nd Ave and Spring St. This new location has an office building on each corner. It is not next to any transit tunnel exit, bus stop, or within eyeshot of any major tourist attractions. This is quite a downgrade if the folks managing Pronto! are really trying to make the stations convenient, noticeable, and usable.

So let’s consider the context of the original location. 2nd Ave is a highly trafficked street. All manner of vehicles roar by at 35 mph, pedestrians rush through while planes fly overhead, and ambulance and police sirens wail. Whatever other distractions befall a given block in the middle of Downtown, can one bicycle rental station on the sidewalk next to the garden really take away from the peaceful and contemplative nature space? I like to have places to get away from the noise of the city and contemplate peacefully as much as anyone, but I don’t think it’s really reasonable to put a garden in the middle of Downtown and deny any newcomer on the claim that they are disrupting your peaceful atmosphere. Perhaps if the garden’s designers wanted it to be peaceful and contemplative they should have enclosed it like the Waterfall Garden in Pioneer Square. Or, located it in somewhere that is actually peaceful and contemplative like Discovery Park, which would have been especially appropriate given that a military base formerly occupied the site.

When does political correctness go too far in the context of city planning and urbanism? As we try to build a multi-modal system that give urbanites and tourists alternatives to driving, should we make concessions to people who cry foul to political correctness even if that concession is at the expense of the usability of the system? Albeit a seemingly minor case of such a problem, the relocation of the Pronto Station at 2nd Ave and University St raises the question of what principles will guide us as we try to build a mutli-modal transportation system that can offer viable alternatives to private car travel. Making concessions like this, rather than being dedicated to designing the best system possible, will eventually add up to a system that is inconvenient to use and thus cannot compete with private car travel.

I’m sensitive to the desires of the Garden of Remembrance’s board to create a peaceful place where citizens can respectfully contemplate the sacrifices of those who served our country. However, I don’t think outdoors adjacent to a Downtown thoroughfare is the place to do that. Downtown is the transit, jobs, and tourist hub of the entire region, and we should take every chance we get to showcase well designed urban systems there.