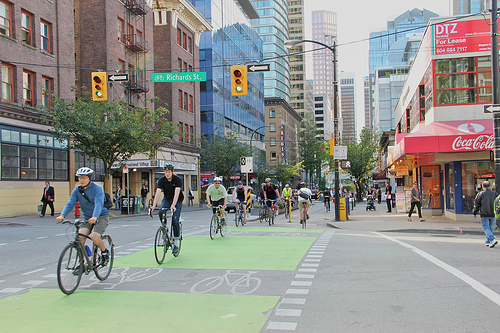 Fun for the whole family: Wonder what biking in Vancouver, BC is like? Sightline has a great photo essay on how wonderful it is to bike around the city.

Dubai of the Balkans: Belgrade, Serbia wants to spiff up their waterfront, and ambitious plans are in the work, but is it just for the foreign rich?

Criminal landlording: A San Francisco renter sees a rent hike of over $6k per month.

$15 Now: The fight for $15 per hour continues. Franchises get shot down on being exempt from higher minimum wage rules, and Washington Restaurant Association talks actual numbers for operating cost and wage changes.

The rent is too damn high: CHS takes a thorough look at all of the affordability issues in light of the Mayor’s Housing Affordability and Livability Advisory Committee.

Bike data: Seattle Bike Blog has the details on the initial numbers from the new bike counters in Bellevue.

Reinventing the carpool: Since the 1980s, carpooling has dropping nationally as a real mode share. But, with new options out there through app services, maybe it can make a comeback.

France going green: France is getting serious about environmental sustainability. New developments must now either have solar paneled roofs or incorporate green space on the roofs of buildings.

Stayin’ political: After a huge groundswell of support for a pro-bike advocacy Cascade Bicycle Club, the political wing of the organization will stay just that–political.

The real inequality: We talk a lot about inequality in Seattle, but it doesn’t even crack the top 10 cities in the US. Suburbtopia Altanta takes the top spot. Although, the rich definitely got richer in Seattle.

Thank a bicyclist: Why do we even have paved roads today? You may just be surprised to learn that’s thanks to Good Roads Movement lead entirely by bicyclists.

UK housing crisis: Talk about housing crisis, London is experiencing unprecedented housing price increases that’s basically gobbling up all of the wealth in the United Kingdom. In fact, £282bn of £289bn of all property value increases have taken place in London and the Southeast of England.

LA obesity crisis: Despite a public health effort in Los Angeles to stem unhealthy fast food eating by residents, the regulations prohibiting new fast food joints hasn’t actually stopped them from appearing, and the data shows that per capita obesity is still higher than before the rules went into effect.

Move Seattle: We weren’t the only ones who wrote about the Mayor’s new $900m, 10-year Bridging the Gap levy. Seattle Met, Seattle Bike Blog, Capitol Hill Seattle Blog, and Seattle Transit Blog each took a whack at the details.

Protecting history in Barcelona: Barcelona is planning to give over 100 stores and uses special protection status due to their unique character as opposed to the buildings themselves, an entirely new approach to historic conservation.

The parking wars: We’re loving Streetsblog’s Parking Madness 2015 matchups. This matchup between Nashville and Amarillo is amazing to say the least.