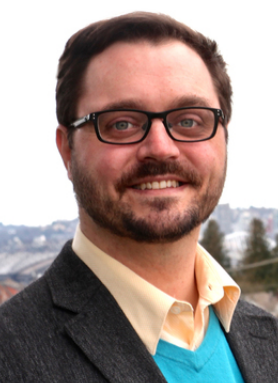 Jon Grant is running for the at-large position 8 seat on the Seattle City Council. He was recently the Executive Director at the Tenants Union of Washington State, which advocates against increasing rents and displacement of renters. He helped push Seattle’s 2012 rental inspection ordinance that checks if units are up to code. Among support for the proposed affordable housing linkage fee and increased height limits, which would have an environmental benefit by allowing more people to live in Seattle, his campaign platform includes police reform and campaign finance reform.

Jon started by saying there is too much influence by the real estate industry at City Hall. He used the example of the South Lake Union rezone’s in-lieu fee for providing affordable housing, which was lowered to $22 per square foot from the originally proposed $85 per square foot. He said that instead of incentivizing affordable units, it should be mandatory. He supports increasing the City of Seattle’s public housing levy, perhaps even tripling it, but said that will still not be enough. He said avoiding displacement is not just the job of the public, but also that of the private sector.

Thinking broadly, Jon said that residential segregation was the biggest issue not solved during the civil rights era of the last century and that it is still evident in Seattle. He discussed the example of rethinking how low-income and minority groups can better benefit from the light rail system. He said the City needs to adopt an anti-displacement stance, such as through buying property near future rail stations and changing zoning to disallow big box stores near stations. He said a balance needs to be struck to ensure investment in transit benefits everyone.

Jon said the plan is achievable if people fight for it. He supports the implementation of the Bicycle Master Plan towards this effort. He also supports the proposed Move Seattle levy for transportation projects, but said Seattle relies too much on the  property tax. He said the employee head tax, rescinded during the economic recession, removed a revenue source of $20 million per year; with the economy recovering, he suggested reviving it as one option for funding transit service and other transportation improvements.

Jon referred to a recent study by the Department of Planning and Development on areas where residential displacement is likely, and said those areas should be more carefully planned for. He said new growth should continue to be concentrated in urban village. He said a conversation needs to be had with homeowner associations, community organizations, and developers on accommodating new housing in single family zones.

Jon answered that the new Metro transit service being funded by Proposition 1 is of citywide importance. Jon also favors proposed projects that will increase access to light rail: the Graham Street station that would be funded by Move Seattle, and planning for a future station at NE 130th Street. He said the linkage fee needs to be implemented before future stations are completed so the value of new development can be captured.

Read our interview with another District 8 candidate, Tim Burgess.