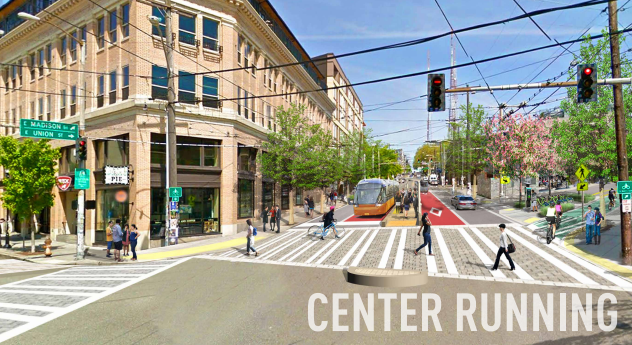 Whittling away: Madison BRT could show the region what high quality BRT is capable of, or it could be the posterchild for “BRT creep”. Zach at the Seattle Transit Blog explains what’s at stake at the next project decision point. It’s not just buses though, Tom at Seattle Bike Blog shares concerns on possible compromises on bike improvements.

Going Euro: San Francisco has added some swanky bike lanes that are elevated 2 inches above the street surface.

Tragedy strikes: Paris suffers a coordinated series of terrorist attacks. In spite of this, the world shows support for the French. All of this comes on the heels of other urban acts of similar terrorism in Beirut and Baghdad.

In dire straights: The top US transit systems need a cash infusion of $102 billion just to keep of with basic repair.

Another skyscraper: A Vancouver-based company is planning a 41-story residential tower in the Denny Triangle.

Spicing it up: Milwaukee is classing up their “parking craters” with a bit of paint and pizzazz.

New school: The University of Washington approves a new $163 million biology building next to the Burke-Gilman Trail.

Lanes are no solution: Caltrans, the department of transportation for California, says that adding highway lanes doesn’t solve traffic woes.

The divide: What Yelp can tell us about gentrification and race.

Playing ball: A group hoping to rebuild KeyArena for professional men’s basketball and hockey teams hasn’t yet heard back from the City of Seattle.

Housing choices: A British survey provides a window in why people to choose to live where they do.

Powers combined: Work on the Cascade Bicycle Club and Washington Bikes merger is still progressing with big milestones coming in December for the two organizations.

Bay Area tugged in all directions: Mountain View, California approves a plan by Google to provide up to 9,100 dwelling units near the tech giant’s campus. Meanwhile, Palo Alto adopted a zoning change to reduce heights in some residential areas to one story and the regional planning body has threatened to penalize cities that fail to meet housing goals.

Great parks: A compilation profiling many of North America’s great park spaces from our very own Sarah Oberklaid.

Maps of the Week: A designer has created a map series based upon experience and from the mind instead of GPS. And, maps showing where and how US veterans live.