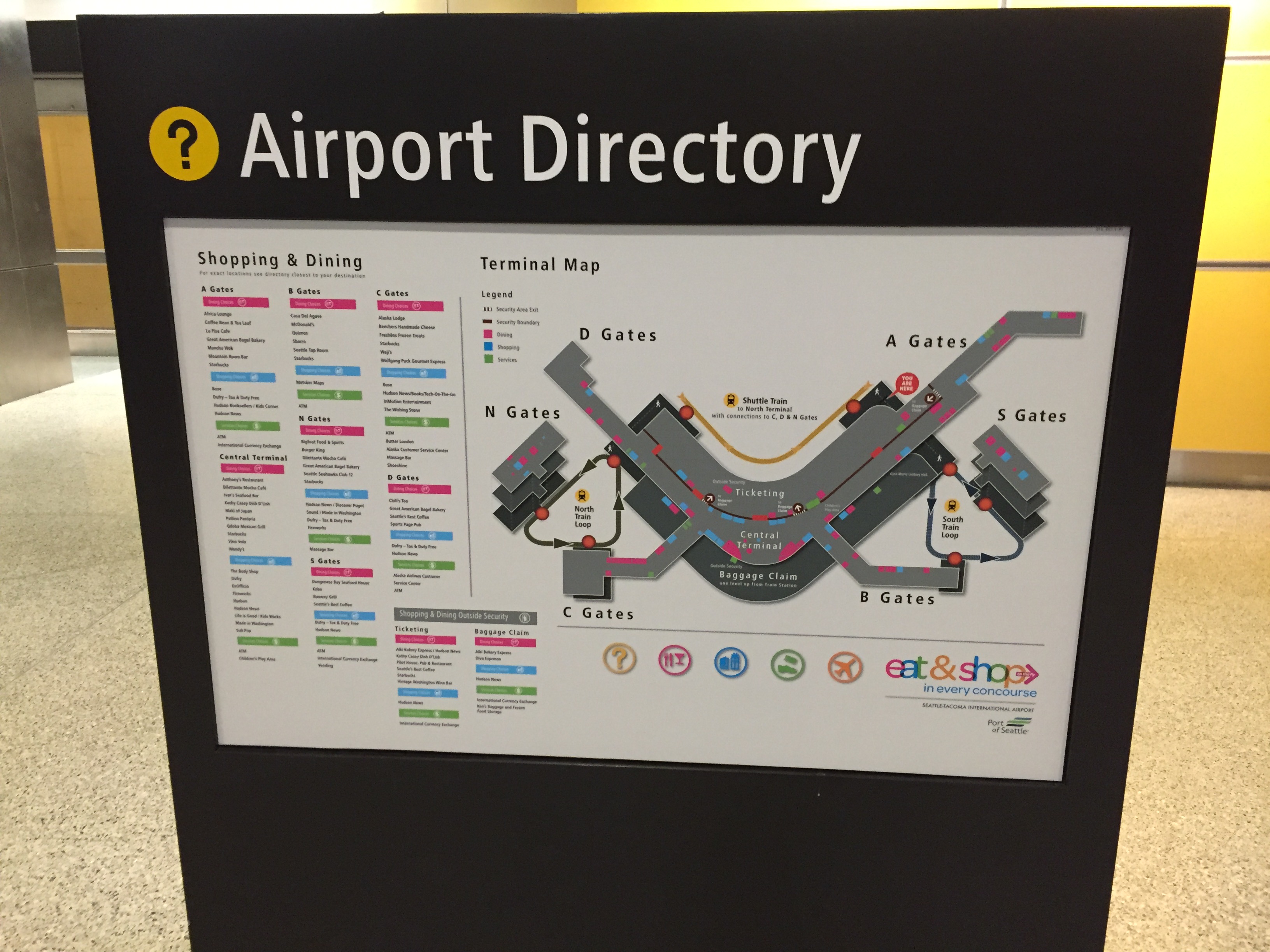 The Port of Seattle is working through an update to its Airport Master Plan for Seatac. This planning effort comes at a critical time in the airport’s elevated importance nationally and globally. Seatac now ranks as the 13th busiest airport in the nation and has the fastest pace of passenger growth amongst its peers. In 2015, the airport saw more than 42 million passengers pass through its halls. That’s almost a 5 million increase over 2014 when the airport accommodated a whopping 37.5 million passengers. Early numbers for 2016 already show that the airport is on pace to increase by another 10% or more in the passenger counts.

Part of this increase has to do with higher business and leisure travel locally from a growing economy, but a big portion of it can be attributed to increasing competition amongst hometown air carrier Alaska Airlines and Atlanta-based Delta Airlines as they battle it out for market share. The latter airline has stepped up its presence at Seatac in an effort to make the airport its primary gateway for international travel to the Pacific and Asia as well as its premier West Coast hub. In fact, from the beginning of 2014 to end of 2015, Seatac saw the total number of annual passengers increase by 7 million. That kind of growth almost managed to match the total increase seen over the previous 10 years, which is a real testament to the kind of competition taking hold at the airport. 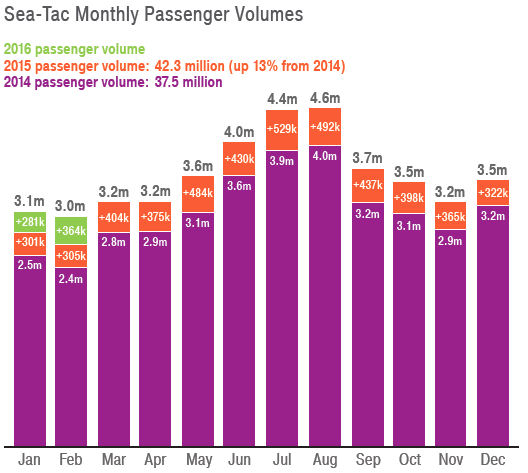 The Need And Constraints

The Port of Seattle has carried out growth projections for the airport to 2035, and they are striking. Annual passenger numbers are forecasted to reach 66 million, an increase of 24 million over 2015 numbers. And annual operations of plane movements are targeted to grow to 540,000, an increase of 190,000 from 2014. The increase in plane movements is an especially critical issue given that the Port estimates that the airfield could reach critical delay by 2029.

To support these kinds of passenger loads and plane movements, the Port of Seattle anticipates major terminal rebuilds and expansions as well as redesigns to the airfield and existing facilities on the airport grounds. For passengers, this means that by 2034, 35 additional gates could be added with 16 of them capable of handling wide-body aircraft for international travel. Seatac Airport currently has 88 gates of which 11 are designed for wide-body aircraft. But improvements are also under consideration to boost the capacity of the airfield by changing the taxiway configuration and adding new hold positions for aircraft to ease congestion.

The airport grounds have a number of key constraints. First and foremost is that the property is effectively hemmed in by environmental and geographical features as well as major roadways. Any expansion or redevelopment proposal must work around the airfield. As it stands, Seatac Airport has three runways that are laid out on the western two-thirds of the property. All three are parallel and aligned north-south. These runways cannot be substantially redesigned.

And what’s more, the last airport expansion of the third runway involved immense grading work to bring the full length of the runway up to the same height as the first two. Expansion further westward would be prohibitively expensive in time and cost since the western edge of the property is essentially a very steep cliff. Elevation changes there are in excess of 20 feet in some areas. Roads like SR-518 and SR-509, and SR-99 also form very real barriers that make expansion beyond them virtually impossible.

These site constraints mean that a new terminal is most practical east of the airfield where expansion could be reasonably feasible in one form or another. Any new or expanded terminal near the central terminal will almost certainly require some displaced airport facilities. The kinds of facilities that may need to be move include maintenance, cargo, holding stands, and other airport activities. But the Port of Seattle has determined that it is essential those displace facilities remain on the airport property somewhere. That somewhere is most likely by relocating them to an area south of S 188th St where they can be connected via the existing taxiway and runaway and cross the land bridge over S 188th Street.

Expansion Alternatives On The Table

The Port of Seattle has come up with four concepts for airport expansion with different tradeoffs. But in all cases, the expansion concepts could be delivered by additions to the existing terminal or creating a second terminal facility as part of expansion. The image below gives a general comparison of the one versus two terminal expansion choices.

In the one terminal alternative, the central terminal would be expanded further east to support higher passenger flows through that facility. This essentially means that space would be taken from the current parking structure to build new basic airport terminal facilities. Under the different concept expansions, passengers would generally have to walk longer distances to get to the main terminal, despite a new people mover to help facilitate transport between different airport sectors. Making this alternative work would be more costly than a two terminal alternative primarily because the airport would have to continue operating under increasing demands despite certain elements of the airport being temporarily closed to public use. During many of the construction phases, this would be very disruptive to passengers and airport operations.

In the two terminal alternative, a new terminal could be built on Port of Seattle property near the existing cellphone lot north of the central terminal. Since the likely sites for the new terminal are mostly vacant, construction impacts to passengers and airport operations would be quite minimal. This alternative also means that passengers would be able to check-in or pick up baggage closer to their where their departures and arrivals are than the one terminal alternative. Like the one terminal alternative, a new people mover would like be constructed to expedite movement across the airport. The two terminal alternative also has some deeply practical benefits to the Port of Seattle, including the ability to build new airport capacity faster, even out the passenger loads between the north and south terminals, and the overall lower capital cost to construct expansions.

With the two general alternative approaches for terminals out of the way, there are a variety of different options that the Port of Seattle is analyzing for actual gate expansions and aircraft hold positions.

Option 1 is largely predicated on making linear corridor expansions to concourses. Concourse D on the north side could be expanded northward with two new piers. Concourse A could be further extended south in an L-shape; that concourse would be focused on providing more gates for wide-body aircraft. That’s in line with it being billed as the international departure wing of the airport, in addition to the South Satellite. The North Satellite could be expanded by nearly half of its existing size without impeding the airfield. Existing airport facilities north of the central terminal would be fully displaced and additional room would be made for aircraft hold positions there. The primary drawbacks in this option is that aircraft maintenance facilities would be displaced near the South Satellite and Concourse A, new gates at the south end would add to congestion in the area, and the south end would lack any hold positions for aircraft.

Option 2 would partially place terminal expansion emphasis on the north side of the airport and make targeted expansions to existing concourses. The bulk of new gates would be added to an extended Concourse D. Three new piers would built along the main Concourse D corridor, which would primarily serve medium-sized aircraft. Concourse A and Concourse B would both be redeveloped to accommodate larger wide-body aircraft so as to support international flights. And like Option 1, the North Satellite would be substantially expanded. This option still leaves the south end of the airport with a lack of hold positions.

Option 3 would focus on similar terminal expansions as those presented in Option 2, but a noticeable difference is that aircraft maintenance facilities would be removed in favor of new hold positions on the south end of the terminal. Additional hold positions would also be located just north of an expanded Concourse D. The biggest drawback from the proposal is that aircraft maintenance near the terminal would be eliminated.

Option 4 is the most significant expansion proposal. It mimics many of the same elements proposed in Option 2, including: redevelopment of Concourse A and Concourse B, an expanded North Satellite, and the expansion of Concourse D with three piers. The proposal goes further with new hold positions for aircraft north and south of the terminal, and the creation of a new maintenance and cargo area south of S 188h St. Establishing a new maintenance and cargo area would certainly go a long way toward alleviating the complications of expansion passenger terminal facilities north and south, but it also would add new ones for the airport. One of the biggest challenges for the Port of Seattle would be connecting the maintenance and cargo area to the main airfield. That’s because the lands upon which the new facilities would go is lower than the height of the airfield. Ultimately, that would require additional civil engineering and grading work to make it work as part of redevelopment.

The existing light rail line runs in the middle of the Airport Expressway north of the central terminal and the width of the right-of-way is already generous. The Port of Seattle will ultimately impact the existing expressways in some manner when a second terminal is constructed. So it may be wise to consider slight adjustments to the expressway lanes and add station platforms on the outside of the existing tracks. The platforms could easily lead to a skybridge or underground passageway that connects to a new second terminal.