The Wallingford Community Council had its annual meeting Wednesday night and elected a new slate of board members, and, to make a long story short, I ran for one of three at-large board positions and lost. Everyone ran unopposed in advance of the meeting, but a community council member (who was elected for one of the at-large board positions) sounded the alarm that a urbanist renter was trying to get involved so they could line someone up to challenge me at the meeting. 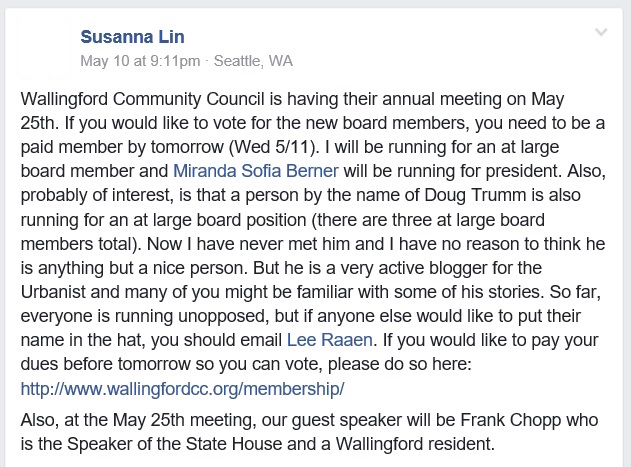 According to its own website: “The Wallingford Community Council (WCC) of Seattle is a neighborhood voice representing the greater Wallingford community in interactions with city government on land use, transportation, and parks.” Nonetheless, that voice is not to include urbanists, apparently.

They saved the election for my position for last. Everyone had just got elected unopposed until me. Then Donn Cave—who had just got elected himself—endorsed his friend Glenn Singer for my position leading to the first and only contested election of the night. They had us give speeches. I gave my little two-minute speech about how I could bring a renter’s perspective to the community council. A woman asked if I even lived in Wallingford, perhaps hoping to discredit me on a technicality. The western boundary of the WCC is Aurora Avenue; so, despite technically living in East Fremont, I qualify for the council.

Foiled there, she followed this friendly query up with, “why did you move to a city that’s so expensive and then ask the taxpayers to help you?” I asked how the taxpayers were subsidizing me and she said that’s what HALA does and reiterated, “why do you live here?” It felt like she was saying that I should go live somewhere else. I mumbled something about I live where I want to live and Seattle is a great place and I wasn’t receiving a public subsidy. I also noted that I was interested in HALA for the novel idea of helping folks less fortunate than myself. Glenn gave his speech about owning a home and having a longer history in the neighborhood. Speeches completed, everyone voted so long as they paid $25 to become members “in good standing” by May 11th.

House Speaker (and Wallingford homeowner) Frank Chopp then gave a presentation bragging about how he blocked a HALA provision in Olympia, which many in the room really cheered on. (Chopp may have a point about that particular provision even if he abused his power as speaker to block the bill.) As he fielded questions, it became clear he didn’t really want to wade into deeper end of the HALA debate and claimed he was too busy to form opinions on some other contentious issues. A shrewd political move.

So an hour or two later they announced the voting results: Glenn had won in a “close” tally, though we weren’t told the exact vote totals. A handful of people walked up me afterward to offer words of support and a few even apologized for the woman who kindly suggest I get heck out of Seattle and her neighborhood. One new officer told me my writings with The Urbanist are what did me, specifically my piece on 45th Street, which highlighted potential parcels for re-development along Wallingford’s main business district. Apparently gas stations, suburban-style banks, and strip malls are too sacred to go.

As it stands, it would seem the Wallingford Community Council is entirely homeowner-run and poised to represent and privilege that viewpoint in its dealings with the HALA implementation process.

This post was updated with new information regarding the Facebook message above and the new link to one of Singer’s Wallyhood posts.