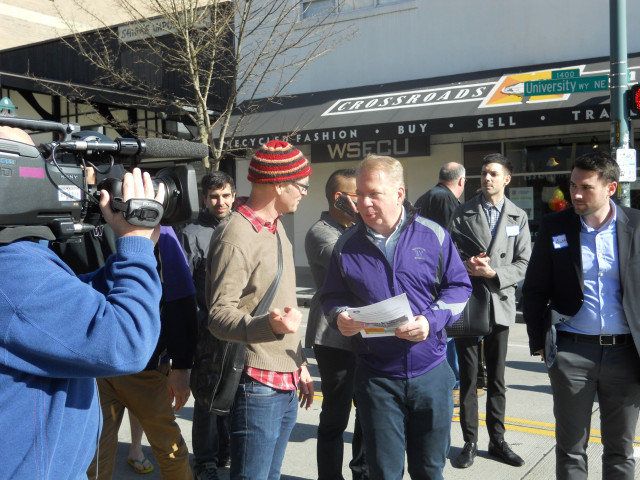 Last month, Seattle Mayor Ed Murray issued an executive order that will soon terminate the City’s official relationship with the 13 district councils. His decision was partially based on data showing the councils are mostly made up of older homeowners in a city that is half renters and socioeconomically diverse, and also a desire to shake up a participation framework that hasn’t been updated for many years. The move sparked declarations of support from local progressives and anguish from neighborhood advocates. This article takes a closer look at the actual role of district councils and how the City may change its public engagement processes in the future.

The district councils have been around since 1987, when the City Council created a system to promote and support public involvement at the neighborhood level. As illustrated in the graphic below, each district council is composed of volunteer representatives from a wide variety of local organizations. These organizations range from business groups, arts nonprofits, and environmental advocates to social service providers and political parties.

Each district council annually elects one of their members to the City Neighborhood Council, an advisory body to the Mayor and City Council.

Originally, the main purpose of all these groups was to facilitate neighborhood planning, but with the state Growth Management Act passed only three years after their establishment, the City’s focus shifted to citywide comprehensive planning. Thus, over time the duties of these groups has changed.

Today, the most significant official role of the district councils and the City Neighborhood Council is to evaluate and make recommendations for three grant programs. The district councils are assigned applications for review based on geographic location and the above map. These programs, which handle millions of dollars per year, are:

A handful of Department of Neighborhood (DON) staff, known as Neighborhood District Coordinators, manage the grant applications and coordinate with other departments as needed. The City spends approximately $1.2 million per year on these staff. Mark Ostrow, whose organization is a member of the Magnolia-Queen Anne District Council, said that during an evaluation of Neighborhood Street Fund applications their coordinator “collected and tabulated the votes as an impartial third party.” Coordinators may also help with posting meeting agendas and minutes online and keep track of district councils’ membership.

The other less formal role of district councils is to be forums for community discussion. Since the councils represent a variety of neighborhood interests, they provide a place for sharing information and discussing any number of issues. With regards to City support for this function, DON spokesperson Lois Maag said, “Some of our staff do more and some do less, depending on the needs of the district councils.”

According to Bill Zosel, former chair of the Central Area Neighborhood District Council (CANDC), the district councils often discuss local projects with City staff. He says, “The bulk of the time at monthly CANDC meetings is devoted to City Departments…making presentations. This is seen by the City as a relatively less time consuming way of getting information to the community by speaking to community council representatives rather than going to individual community councils.”

According to Zosel, presentations from the past few months included the following:

A May 2016 memo (PDF) from DON Director Kathy Nyland described preliminary plans for changing how the City manages community engagement. Early ideas included restructuring around the seven City Council districts, but the report also says that defining any system based on geography leaves out “[t]hose who build and experience community around non-geographical concepts, like language, ethnicity, religious affiliation, or issue-based interests.”

The memo goes on to describe a voluntary survey of 150 district council members from 2013. Nyland summarized, “District Councils work for a limited segment of the overall population…residents attending District Council meetings tend to be 40 years of age or older, Caucasian, and homeowners. This is in contrast to the Seattle population: Median age of 36…34 percent are people of color…and 52 percent rent.”

With this information, and also noting the district council framework has not been updated for over 20 years, Mayor Murray issued Executive Order 2016-06 (PDF) to end support for the system. The meat of the order states, “On or before September 26, 2016, the Department of Neighborhoods, Seattle Office for Civil Rights and City Budget Office shall develop a proposed City Council resolution…with the intent of terminating the City’s existing official ties to District Councils and the City Neighborhood Council.”

Brie Gyncild, a member of the East District Neighborhood Council (EDNC) representing Seattle Central Greenways, was surprised but not disappointed at the announcement. She says, “I do think this is the right decision, but I would have liked to have seen the conversation percolate before the decision to end staffing support was made. It is uncool that district council members learned about it from the Mayor’s press conference.”

On the other hand, Gyncild said, “Most Seattle residents don’t know anything about the district councils. They’re pretty opaque–if you go online and look for meeting minutes, the EDNC last posted a few years ago and the same is true of some other district councils. And that’s if you even know they exist. Each district council has different guidelines for how it adds new members, which organizations qualify, etc.”

These citizen groups are not forced to disband by the order, but they will no longer be supported by the Neighborhood District Coordinators by default. DON spokesperson Maag says, “District Councils will continue to get support; that element is not going away. The difference is that they’ll need to request that support like all community organizations and groups.”

Significant backlash has occurred against the order. In July, there was a citywide summit of district councils in West Seattle to discuss the work they do and how they feel disrespected by the administration. An editorial in The Seattle Times said the order dismissed the concerns of homeowners, saying, “The reality is that people who are older and own homes are more likely to engage”.

The Stranger defended the decision, saying, “The way Seattle’s current neighborhood council system works is institutional racism 101, folks. One privileged demographic should not have a disproportionate, publicly financed influence over public policy and the city’s housing landscape.”

Community councils are independent of any formal government structure, and might be considered volunteer clubs. An active example is the Capitol Hill Community Council. Examples of their work include support for bringing Police Department’s LEAD program to Capitol Hill, advocating for a safe injection site for heroin users in the neighborhood, and helping to establish a Renters Initiative that discusses broad based tenant issues. The Capitol Hill Community Council has a seven-member board that is mostly young renters who are a mix of races and genders.

While the community councils do a variety of work, some of them are notable for other reasons. The Queen Anne Community Council, for instance, is suing the City for its efforts to relax regulations on backyard cottages and mother-in-law apartments.

The administration’s order applied a one-size-fits all approach that, in the words of one district council member, “vilified volunteers.”

The controversy does raise the question of whether it is fiscally prudent for neighborhood grant programs to fund infrastructure. The grants often fund critical safety components like crossing signals and sidewalk repairs that should probably be initiated by the City in a proactive fashion, rather than waiting for a resident to take the time and effort to pursue it on their own. There’s also little way for outsiders to know whether the applications that get funded are pet projects of the district council members or if they meet real neighborhood needs.

The system may be more streamlined in the future. The executive order calls for the creation of a new Community Involvement Commission that would replace the City Neighborhood Council. This new volunteer board will be established by January of 2017, and according to DON spokesperson Maag the details are being worked on now. In the meantime, any grant applications still going through the pipeline will be processed as usual.

Who will be on the Community Involvement Commission and how they will be appointed is an open question. If the process is anything like Seattle’s other similar boards, the applicants will be vetted by the City Council and affirmed by the Mayor, rather than voted in by subgroups.

It also remains to be seen how the Department of Neighborhoods will increase the diversity of its engagement practices, as the Executive Order and attendant FAQ are low on details. However, online platforms may be key; the order directs DON to “Work directly with Seattle Information Technology on digital engagement to explore, identify, and develop tools that broaden access points for all residents.” In a separate effort the City is working to increase low-income resident’s access to the broadband.

More broadly, the FAQ document states, “The one overriding best practice is tailoring outreach and engagement to each individual community in a culturally literate and sensitive manner.” This may involve methods like face-to-face meetings and direct mailings that deliberately reach out to targeted audiences.

The key issue with the district councils is that they are not fully representative of Seattle’s residents, although they often do good work that furthers a variety of important interests. As the population changes and technologies evolves the methods of public participation must also change to keep up with the times and new types of demands. Since those residents with flexible schedules seem to be over-represented at the neighborhood level it remains to be seen how successful the future model will be, and simply removing staff from the district councils doesn’t necessarily solve the issue. A concerted effort by both City officials and neighborhood leaders will be needed to ensure opinions are shared in a democratic way.

Top image: Mayor Murray on a community walk in February 2015. (Photo by the author)