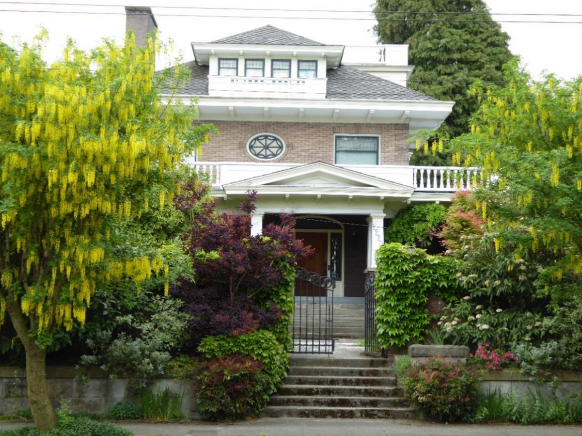 Two buildings in Capitol Hill have officially been designated as city landmarks. The Seattle City Council approved the historic preservation controls for the Gaslight Inn and J.W. Bullock House yesterday. Both structures represent very different aspects of Seattle’s past.

The Gaslight Inn (1727 15th Ave) was constructed in the early 20th century as a Craftsman Four Square for its owner first owner, Paul Singerman. Standing at three stories tall and heavily finished in elaborate detail, the residence commands attention. Mr. Singerman spared no expense in designing the 7,700-square foot residence to become a landmark feature of the neighborhood. The broad wood columns and porch, ornate twin circle windows, and hipped roof dormer collectively center focus of the structure toward the middle. And while the outside is indeed impressive, the interiors are also of note:

The plan of the Singerman Residence featured large rooms for socializing at the first floor. Proportionally, it is divided into three spaces, each nearly equal in width. The first floor includes an approximate 13’-wide entry hall, which led to a parlor/living room on the south through a wide opening announced by oak columns, and a similar sized ballroom on the north through pairs of pocket doors. Behind these sides opposite rooms, there was a smaller library on the south and a dining room on the north, with the kitchen and maid’s quarters beyond. The center hall also led to a 5’-wide, open stair to the second floor.

The house contains a fine stained oak built-in bookcase in the library, with leaded glass doors and lower storage drawers, while the dining room retains the original built-in china cabinet, which is fitted also with leaded glass doors and lower storage drawers. The wide, switch-back stair that connects the first and second floor levels has deep landing featuring a built-in white oak storage bench. The landing is illuminated by daylight through a large, non-original stained glass window. Both this stair and a second, more narrow one from the second floor to the attic level, retain original stained wood paneling (and beadboard wainscoting in the servant’s stair), oak trim, molding, and balustrades.

Mr. Singerman occupied the mansion for a short time before selling it, but his historical connection is important. Born in Poland, he eventually moved to California and became a wealthy businessman. Settling in Seattle, he opened The San Francisco Store in Downtown Seattle in the late 1800s. Mr. Singerman was also one of the few Jewish residents of Seattle and associated with the Jewish community in the Central District. The residence changed hands throughout the 20th century, eventual becoming the bed and breakfast that it is today.

The Landmarks Preservation Board recognized the transformation of residence to guesthouse as a particularly significant event meriting protection status. Capitol Hill, long known as the cultural heart of the creative and gay community in Seattle, is an important history in the evolving nature of the city and the Gaslight Inn sits at the center of it. In summarizing this, the Landmarks Preservation Board said in their designation report that “[t]he Gaslight Inn exemplifies the efforts by gay and lesbian residents to revive the neighborhood in the 1970s and 1980s, and to create identifiable LGBTQ space in the city.”

In designated the Gaslight Inn on October 7, 2015, the Landmarks Preservation Board cited two primary reasons:

C. It is associated in a significant way with a significant aspect of the cultural, political, or economic heritage of the community, City, state or nation.

D. It embodies the distinctive visible characteristics of an architectural style, or period, or a method of construction.

The preservation controls will be far reaching. Not only will the existing site and exterior features require care and protection, so will much of the interior. The first floor interior entry hall, main staircase, living room and dining room, library, and parlor will need to be largely retained as they are today.

The Tarico family–current owners of the residence–requested landmark status in an effort to retain the structure as part of the single-family residential fabric in the North Broadway area. In speaking with Capitol Hill Seattle Blog last year, Dr. Valerie Tarico explained why she felt it was important to nominate the structure: “It’s something I’ve thought about for years. It’s a stewardship issue. The building was made our ancestors that put a lot of care into their craftsmanship. Buildings like this are not going to be made again.” The property is zoned as SF5000, but is just across the street from lots zoned Lowrise 3, which allows the development of modest multi-family uses. Landmark status, however, means that future owners of the property could not remove the residence and redevelop the site.

D. It embodies the distinctive visible characteristics of an architectural style, or period, or a method of construction.

E. It is an outstanding work of a designer or builder.

Landmark status will impose controls on the site, exterior facade of the residence and garage, and certain portions of the first floor interior. The reception hall, main staircase, living and dining rooms, study, and conservatory will all be covered by the control protections.