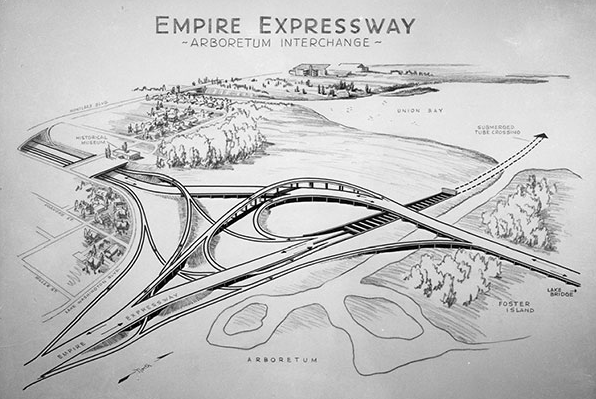 Today, Councilmember Debora Juarez will likely introduce a bill to the City Council, cosponsored by Councilmembers Harrell, Burgess, and O’Brien, that will request that the Washington State Department of Transportation transfer the ownership of a segment of property that it owns near the soon-to-be-decommissioned old SR-520 bridge to the City of Seattle. These properties contain some of the “ramps to nowhere” which were constructed along with the former SR-520 bridge with the intention of connecting to a new north-south freeway that would have required the demolition of an entire block adjacent to the current Martin Luther King Jr Way in the Central District.

That “R.H. Thomson Expressway“, named after the former city engineer who oversaw the demolition of Denny Hill and the cutting through of the Lake Washington Ship Canal, never came to be. It never came to be thanks to activists who sounded the alarm about the construction of a freeway through an urban neighborhood, and would have come to be if city and state government officials at the time, in the late 1960s, had their way. Today we thank our lucky stars that we never built the thing in the first place.

According to the City Council bill, a segment of the ramps would be preserved to show “the importance in city history of the citizen revolt against the expressway and how the efforts of civically engaged Seattleites saved many neighborhoods, hundreds of city blocks, and thousands of homes from the harmful impacts of highway construction.”

What the City Council, in approving the preservation of these ramps, would be signaling is: this fight is done. There are still thousands of homes suffering from the harmful impacts of highway construction. In 2011, InvestigateWest looked at the impacts of air pollution in South Seattle near Interstate 5 and other high-traffic routes for diesel traffic. A public health crisis remains as a result of the highway system that was constructed.

The R.H. Thomson Expressway was likely only able to be cancelled because I-5 had already been constructed straight through our city, with huge swaths of homes and businesses in First Hill, Capitol Hill, Eastlake, and North Seattle coming down, often to as significant opposition as faced the R.H. But the political will was stronger to create Seattle’s main interstate than it was a few years later.

And then there is the issue of the highway that we are currently drilling underneath Downtown as you read this. The construction of a new freeway underneath Downtown with higher capacity than the existing Alaskan Way viaduct will not only increase greenhouse emissions directly, but due to the fact that the project is sucking all available funds, leaving little for things like improving transit, and because it will be tolled, it would actually increase traffic volumes elsewhere, including on Downtown streets, and on I-5.

To see Councilmembers Harrell and Burgess sponsoring the preservation of the R.H. Thomson Expressway ramp segment is particularly galling, considering their full-throated endorsement of the deep bore tunnel project for SR-99. Council President Harrell has also spent much of the past few months trying his hardest to keep vocal activists out of Council Chambers, most recently exemplified by the Mayor’s budget address which was available to almost no members of the general public.

Finally, to see Councilmember Debora Juarez proposing this move to exemplify the actions of a small group of dedicated citizens to move city policy strikes a very false note coming from the Councilmember who, in response to the Block the Bunker activists protesting the spending of City funds on a gold-plated precinct, failed to see the symbolism and understand the terms of the fight, saying “I am not afraid of a building. I am not afraid of the people in the building”. The fight over urban freeway construction, while clearly about disagreements about how to transport people, was also about a conflict over a shared vision for our city’s future, much like the fight over the North Precinct and the fight to invest in affordable housing instead.

Our city’s preserved landmarks have a power beyond themselves to communicate our ideals, our history, and our future. This proposal rings hollow. The question here in my mind is not whether the preservation of the ramp segment will improve our city, but whether doing so implies something about our city that is not true. Citizen activism, engagement, and influence is an uphill battle that takes place every day. It is not something to be put under glass.