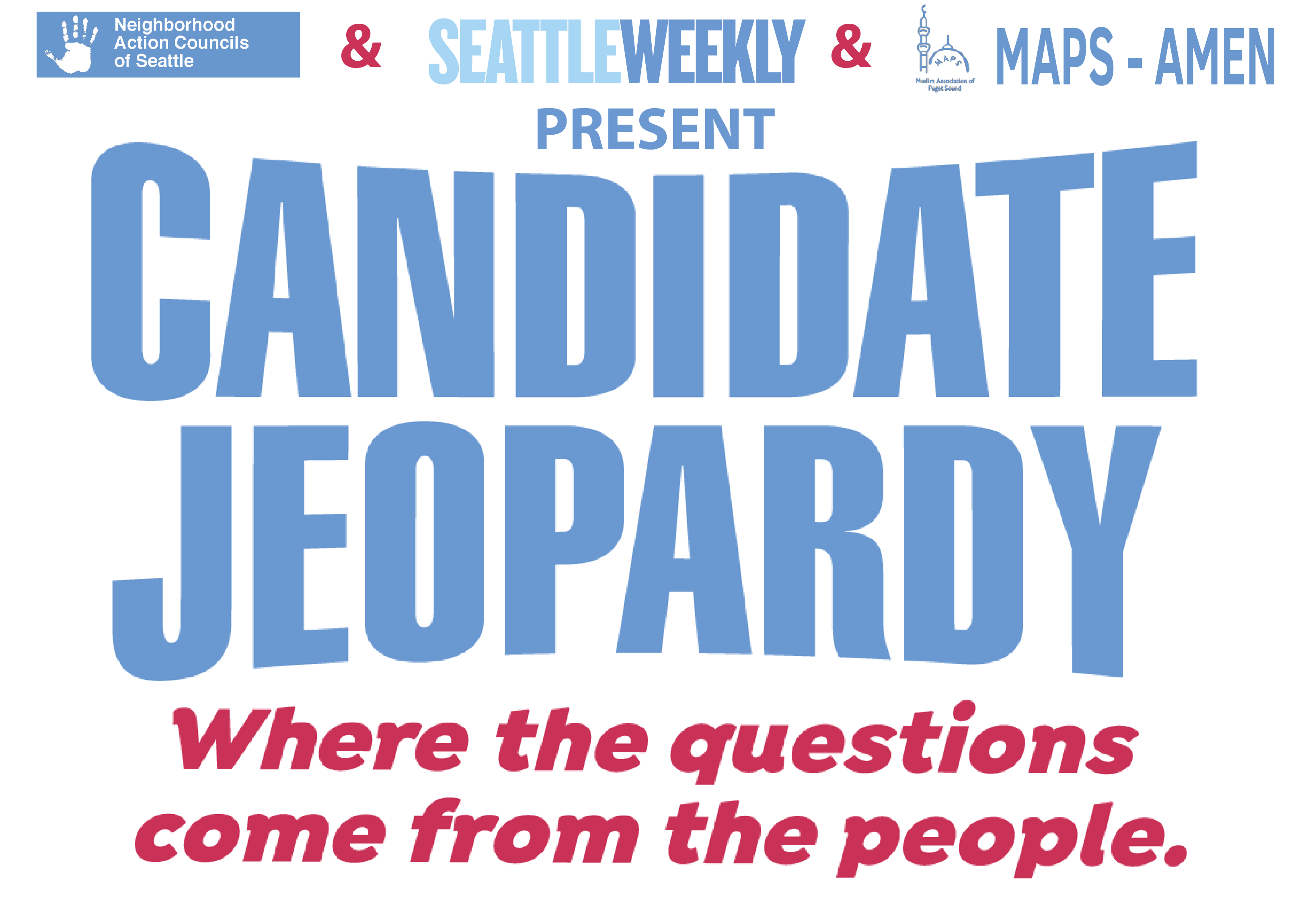 Let’s face it: our political system is broken. There are many causes and lots of symptoms showing how deeply and widely troubled our democracy is these days. A universally-felt notion is that our elected officials at all levels are out-of-touch and unresponsive to the average person’s concerns. Politics has become an inaccessible and inscrutable quagmire for the unfamiliar — all too often people of color, cash poor, LGBTQI, and other marginalized folks.

Many of our candidates are out to change that, but first you need to meet them. That’s why we’re partnering with the Seattle Weekly to bring you Seattle Candidate Jeopardy!

Come to First Covenant Church today at 5:00pm, to watch the candidates for mayor and City Council Position 8 answer questions submitted by your neighbors. Who will pick the low-hanging questions? Who will pick the hard ones? Will we have a Ken Jennings of the 2017 elections? Come find out!

We are here to make politics fun again. It’s not all dry city council meetings and difficult language, after all. Politics is about us making group decisions that affect us; why shouldn’t it be fun? In this uncertain time of alternative facts, we believe face-to-face democracy and conversation is the best way to fight back.

The promotional video highlights a number of questions from community members representing various groups. MAPS-AMEN, the American Muslim Empowerment Network, a new initiative of the Muslim Association of Puget Sound, is represented. It launched in December 2016, MAPS-AMEN is dedicated to combating Islamophobia and other forms of hate through concrete and effective positive actions, educating about Islam and Muslims, promoting our shared American values, and helping empower future leaders of America.

A number of questions come from folks wearing Nickelsville shirts. Nickelsville began as a response to the sweeps of homeless encampments by a Seattle mayor. In the eight years since we’ve been through more than twenty five moves, twenty locations, a couple of sweeps and a couple of Mayors, and now operate multiple tiny house villages throughout Seattle. You can read more about the efforts on this Facebook page.

Katie Wilson, the general secretary at The Transit Riders Union (TRU) asks a question in the video. TRU is a democratic organization of working and poor people, students, seniors and people with disabilities. We fight to preserve, expand, and improve the public transportation system in Seattle and beyond, so that everyone has access to safe, affordable, and reliable public transit.

The Greater Seattle Neighborhood Action Coalition was started on November 9, 2016 to build communities of resistance through solidarity, mutual aid, direct action, and participatory democracy. Find your NAC or visit our Facebook page for more information.