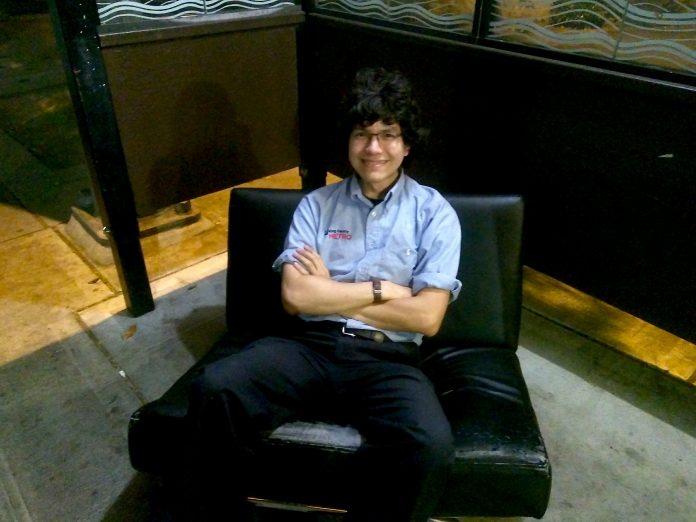 It was the most elegant piece of furniture I’d ever seen dumped at a bus stop. How exciting!

“Hang on a second, I just need to look at this awesome chair,” I explained to my companion inside the bus. It was midnight. You can do stuff like that during the witching hour, when things that don’t make sense suddenly do.

I skipped out of my nigh-empty vehicle. Just my friend and an oblivious smartphone-gazing youngster back there, who never even noticed me leave. His loss. “Look at this amazing chair,” I practically squealed to the homeless woman sitting nearby on the regular bus shelter bench. I forget her reply, which was a cautious affirmative. She’s always like that, a sweetheart sleeper who talks like your sarcastic but loving aunt.

My thought was, who would pass up the incredible opportunity to sit in this thing? Would you sit on the regular bus bench if this beaut was right next to you? Or maybe do something silly like drive the bus right past without smelling the roses, as it were?

I plopped down on the plush black leather and loved everything about it, giggling at the absurd angle of the recline–clearly some rear supports were missing, making things all the better. When it comes to comic value, shifting any chair to a forty degree backwards tilt is a major improvement. We were looking at the world’s first mid-century modern La-Z-Boy.

The woman explained that it’d been there all day. “That’s fantastic,” I decreed. “This is definitely the best bus stop in Seattle right now. Look at this thing!” I exclaimed to another passenger who was walking up, a young woman who rarely speaks but always smiles. She grinned, chuckling at my enthusiasm. “Here,” I said. “I’m gonna angle it so that they can see the bus coming more easily…”

Yes, it could’ve been wet. It could’ve smelled. It might’ve had chemicals or paraphernalia or stains or razor blades or animals… But it didn’t. Sometimes what-ifs and paranoia are important, worthwhile.

And sometimes they’re for the birds.

You’ve gotta go with your gut. Your intuition is the amalgamation of all of your life experiences, and it always knows more than your conscious mind does at any given moment. You can always reason yourself into doing something, and your emotions can always come up with cause for fear and holding back. Your gut is in between, and it’s quieter and deeper than either. Wiser. Sometimes it knows that getting excited about a broken couch with a couple of chuckling strangers on a dark night will be just fine.