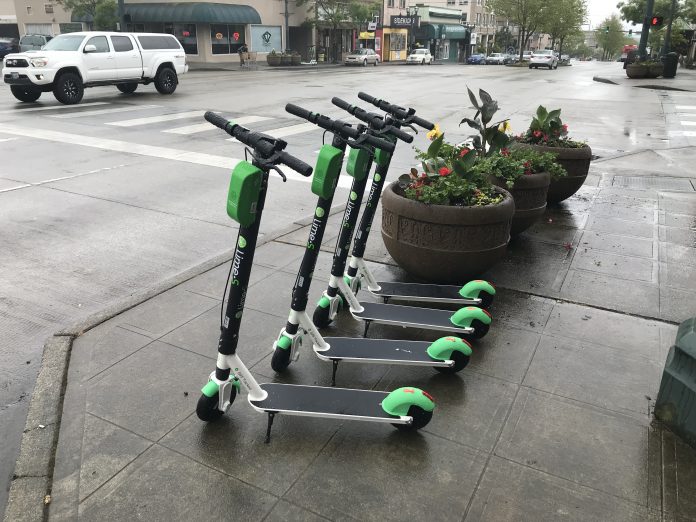 King County Councilmember Joe McDermott (D-District 8), who represents White Center, was the chief sponsor of the pilot program legislation. During the committee process, he provided a context for exploration of a pilot program, saying that shared e-scooters could be beneficial “in a traditionally underserved area neighborhood and a real mobility connection for that first and last mile..to give people access to transit.” He also highlighted how the pilot program would be designed with options for unbanked and low-income households and serve non-English-speaking users.

White Center is an unincorporated urban area nestled between Seattle, Tukwila, and Burien. It is one of few urban areas still under the control of King County, and one of the largest Potential Annexation Areas, known in planning documents as “North Highline”. The area is fairly suburban despite a strong grid in many portions. Streets tend to lack sidewalks and bike lanes, with roadways being minimally paved. Wide shoulders tend to adjoin the paved roadways with crushed rock for on-street parking.

Demographics of the area indicate that it is a minority-majority area (58.4%) and that the median household income is just over $47,700 as of 2017. This is significantly different from Seattle where the median household income was just over $86,800 in 2017 and majority Caucasian. White Center is comparably much less wealthy and has many historically underserved communities, which makes its pilot program a unique test case for shared e-scooters.

With the exception of King County Metro and sewer management, the County is not well known for providing localized urban services, particularly innovative ones. The foray into e-scooters is notable because it will be managed under the King County Department of Executive Services instead of Metro or King County Department of Local Services, which arguably have more applicable competencies to run such a program.

E-scooters will be allowed to operate at any time of day, but special reflectors required by the state will need to be included on e-scooters to allow them to operate during the time period a half hour after sunset and a half hour before sunrise.

Typical provisions that operators keep e-scooters in good condition, provide easy-to-see identification for each unit, carry insurance, and fully indemnify and assume liability are included clauses for the pilot program. Operators will also need to put a process in place to enable King County and the general public to raise parking, safety, and maintenance issues, and they will need to actively engage the public to promote good e-scooter behavior (i.e., where to park and how to operate e-scooters). The department will need to develop a specific timeframe for complaints to be addressed. Additionally, to ensure equitable access, operators will need to make their mobile apps available in multiple languages, including English and Spanish, and provide an option to use e-scooters that works for people who do not have a smartphone or that are unbanked.

While it seems unlikely to occur in practice, the department will have the power to terminate an operator for good cause, such as unsafe equipment or critical non-compliance violations.

Public engagement and reporting throughout the pilot program will be critical for the department. The ordinance outlines an expectation that the department will seek community feedback from people who have and have not participated in the pilot program. Feedback collection will seek to better understand impacts of e-scooters and their performance, such as “reasons for using electric motorized foot scooters, the mode of transportation replaced by an electric motorized foot scooter ride, ease and barriers of use, responsiveness of the county and operators to questions and concerns, infrastructure needs, parking issues and similar issues.”

The information from community feedback will be included in reports alongside an equity analysis, analysis of first/last mile connection usage to transit, costs of the pilot program, and a host of other performance data. The King County Council specifically wants information on the total number of e-scooter trips made, trips per day, and usage patterns by time of day and day of week as well as average trip length, popular trip routes, availability and distribution of e-scooters, and anonymized demographics. This means that the operators will need to deeply open up their data to the county for analysis on a regular basis to monitor performance.

Two reports will need to be filed with the King County Council: one by the end of June and another toward the August of next year. The timing of the reports suggest that they will be informative to the type of spring and summer performance that the pilot program is having. The second report could also help inform any annual budget proposal due later that September and establishment of a permanent program before the end of year.

A possible obstacle to program performance is that King County requires the use of helmets while biking and scootering. This may suppress potential ridership, especially if violations are enforced by the King County Sheriff’s Office. While helmets are a good idea to reduce head injury risks from falls, mandating their use is complicated given that shared e-scooters are dockless and generally do not come with helmets. This means that users would need to bring their own. In any case, users will generally need to operate e-scooters on streets as they are restricted in parks and county trails unless specifically authorized. They will also not be allowed on streets with posted speed limits above 25 mph.

So far, the only major shared e-scooter operator in Puget Sound is Lime. The company currently operates shared e-scooter programs in Everett, Tacoma, Redmond, and Bothell. Nationally, the company has a variety of competitors, including Spin, Lyft, JUMP, and Bird.