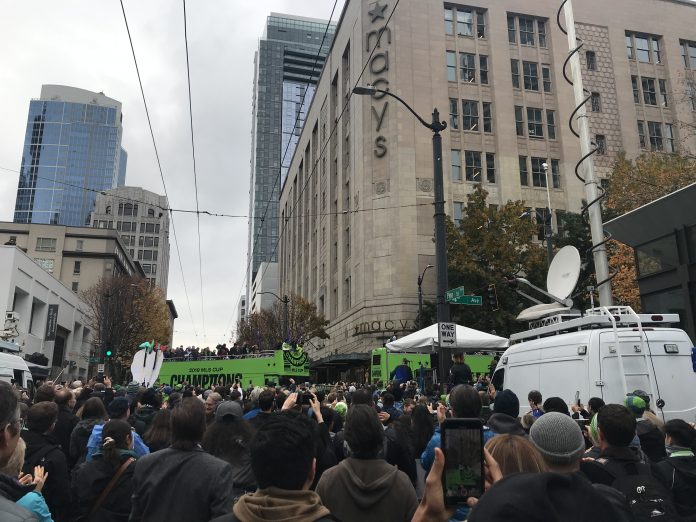 Constitutional: Seattle’s “first in time” regulation of landlords passed constitutional muster this week before the Washington State Supreme Court and appears to have significant implications to takings law in the state.

Rising cost: Rising program costs could spell the end for Phoenix’s recycling program if nothing is done.

Urban fabric: Advertising in public spaces shapes cities and how we see them.

Wrong direction: Maryland and Virginia want to rebuild and expand a Beltway highway over the Potomac River rather than build transit.

Climate in action: Venice is struggling with record flooding that has devastated the city.

Trail blazing: King County has obtained its final permit to complete construction of the East Lake Sammamish Trail in Sammamish.

Emissions penalty: In Montréal, SUV drivers wishing to park in a neighborhood may have to pay more than others for permits.

Euro bus: A cheap European intercity bus company is launching service between Portland and Seattle as well as many other Pacific Northwest destinations.

Destructive energy: New York City is hoping to close a deal with Quebec for hydroelectricity.

Destructive energy: New York City is hoping to close a deal with Quebec for hydroelectricity.

Wrong priorities: Transit police appear to be targeting private food vendors at transit facilities, but why?

Elections matter: The Trump administration is handing out $900 million in BUILD grants, which are historically disproportionately going to highways.

More progressive: With Democrats having a full lock on Virginia, what does that mean for housing and transportation?

Comeback city?: Detroit’s reputation is improving, but has it fully turned back from the brink?

War on biking: A federal panel apparently wants mandatory helmet laws in face of all relevant data on the issue.

Elephant in the room: Democrats appear to be forgetting transportation emissions when coming up with climate plans.

Vision Zero: Is the nation’s capital finally getting safer streets?

Failed business model: Despite continued massive losses and a third quarter hit of $1.16 billion of new red ink, Uber’s leadership somehow believes that the company will be profitable in 2021 ($).

Cautionary tale: Virginia demonstrates how not to build an intersection.

Map of the Week: See the block by block wealth of Victorian London.