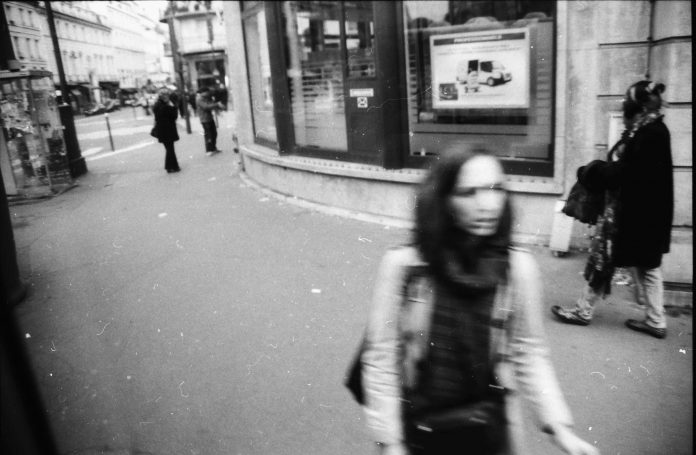 “How are you tonight?”

For certain folks, that phrase means, I respect you. I acknowledge you. And that’s fine. It’s great, actually. I’ve written elsewhere on how pleasantries have valuable meanings totally separate from the words used.

But certain other people know when I ask that I’m actually asking them something. This woman boarding now got me completely. Most of us speak in half-sentences at best; she had words to get off her chest, and they flew out of her with passionate verve.

She was a thin woman in her forties, tall, blue-eyed and dressed in black, a trim figure in a jacket with tights and boots and hair tied back. She responded to my question about the same as she would, I imagine, to a friend she’d known for years. Here was a person utterly at home in her own skin.

“Well, I’m just finishing up a social experiment that went a whole lot differently than I thought it would. Let me tell you.”
“Please!”
“I just spent three and a half hours on campus here asking different people, students, asking different students walking around if they could point me in the right direction.”
“Okay.”
“I was pretending to be lost and slightly tipsy, you know, a woman alone at night on campus, asking for help on how to get downtown. Now mind you, I know how to get downtown, ’cause I’m from here. I’m from Seattle. And I swear, maybe half of all these students have no idea that there’s even buses to downtown, or that they stop over here by where I just got on.”
“You’re kidding!”

She’d been revving up; now she had liftoff.

“But that’s not it. Oh boy, lemme tell you. When I stood there pretending to be a little drunk and a little stoned, asking for help, not one single female in the entire– for three and a half hours, not one girl would dare to walk me over to 15th Avenue. There was a group of them, and one of them was thinking about it, but her friend said, ‘we have to get to this bar.’ Can you believe it? A woman alone at night on campus, a vulnerable woman and these girls aren’t even, won’t even step up for their own sisters? If anyone did talk, it was to tell me to go across campus. ‘All you have to do is go across campus.’ ‘Walk that way.’ Are you kidding me? That’s how we help our sisters in need? And I’m talking male and female, not just these girls. The boys– you know what, the fucking boys were slightly better, and at the end of three and a half hours the only person, the only one single solitary lone person who helped was NOT one of my sisters in humanity, but one of my brothers. This kid Eric, from Taiwan. Bless his little heart. Because think about it, what if I actually needed help? What if I was exactly what I appeared to be? Let ’em know, they have to stumble around in the dark on their own for three plus hours before anyone under 25 will think about lending a hand. I have to get this out, mister bus driver. ‘Cause I am livid.”
“Oh, I completely hear you! Get it said!”
“I’ve just gotta vent this out. We’re talking about a regular, nice, just like you and me, not threatening, woman… And I don’t just mean women, I mean anybody. I’m sorry. I’m in a state of shock here.”

I cleared my throat. “Well I don’t blame you! You know something, I drive this bus, I drive all kinds a buses and you know the one group of people– I say hi to every single person who gets on the bus–”
“As you should!”
“Thank you! Yes! I say hi to every single person gets on my bus, I’m friendly and all this, and you know the one group who is the least responsive, the least reciprocating? College students. UW students, specifically.”
“Well now, if I was taking 18 or 22 credits drowning in homework and exams like I did when I was a student here, and somebody come up on me trying to talk, I wouldn’t want any of that mess. I’d say get outta my face, I got midterms. Okay, I wouldn’t say that.”
“Well now that makes sense. I can dig that. They’re busy, they’re somewhere else.”
“But this is Saturday fucking night!”
“I was a student there 15 years ago, I wonder if it’s changed much.”
“I’m 51 years old and I graduated from this place. And I’m going back, too. Next quarter. That’s why I was checking the place out. Casing the joint, so to speak. You look at the humanities, people don’t get those degrees as much anymore. It’s all about the money degrees.”
“I went to art school. I hope people still do that.”
“I did communications. Something’s changed. But whether or not it’s changed or not changed, there’s a problem in the present and it’s a whole campus of girls and boys on a Saturday night, can’t even… They just walk on by. And it’s not like I’m crazy. I’m not threatening, Jesus. Look at me.”
“I’m just stunned. I’m in shock. All of those kids.. I was raised to help people, look out for people. Hold the door open for folks.”
“I don’t know what just happened. I have no idea what just happened. Not a single woman was… They were so busy with themselves. They weren’t…”

I knew the word on the tip of her tongue. “They weren’t empathetic.”
“Empathetic, that’s right.”
“We gotta stay optimistic though, right? I try to do my part.”
“You’re right. ‘Cause the glass is never half empty.”
“‘Cause at least we’ve got Eric from Taiwan.”
“Thank fucking God. Thank God for that sweet man. He’s studying some kind a engineering. He’s not brainwashed by whatever stuff we got in our country. He’s happy to be here. He says in Taiwan we can’t express ourselves. And here he is. He walked me all the way across campus. He cared.”
“Human to human.”
“Not like these girls, shit. If I was their boyfriend I’d be like biiiitch, don’t you care about other women? What’re you gonna do when we have daughters? That’s breakup material right there. Let me tell you, at the high school I went to on Missoula, Montana, there used to be this beautiful man on the football team. And I don’t just mean he looked good or could play ball. He was majoring in dance and law. And then he starts going out with this stttttttttttttupid, ignorant– I’ll say ignorant ’cause you can teach stupid– girl, who gets all worked up over a stupid nothing and decides to pretend he raped her, she cried fake rape, and just because of the color of his skin and the color of her the whole world decided to believe her without a second thought, and he went straight to prison and stayed there. And if people had looked out for each other and listened to each other instead of freaking out, we’d have a dancer lawyer from Montana instead of an innocent man in prison. I care about campus safety. I was raped by a bunch of frat guys and I’m never gonna let that happen again, to myself or to anyone else– man or woman.  But tonight has got me rethinking my application. I’m serious. The deadline’s Tuesday. I’m optimistic, but… Still!”
“Eric from Taiwan.”
“Eric from Taiwan. Thank God almighty.”

What she was talking about isn’t exclusive to any one age or other demographic bracket. It’s too easy to say that common manners are the exclusive province of those who are older, who don’t work in tech, who come from small towns, who are female… But I don’t buy it. I can’t buy it. Within the absurdly vast cross-section of humanity I interact with, I see too many counterexamples to believe any of the boxes we, in our attempt to understand people, set up.

Eric from Taiwan isn’t an small-town older woman artist. He’s a youthful male engineer from a giant metropolis. You just never know where caring goodness will stem from. But it lives, and every time you do it you set an example for the others around, and though they may not react right then, you’ll have given them something to stew on. I could feel the gears ticking in the minds of the other passengers who’d been listening.

I found myself recalling a conversation from my past, about stewardship. I was told seven years ago it would become the buzzword of our times. That people, especially young people, would look out for each other, care for common causes and usher in a new habit of considering others. That never ended up happening, sure, but I like to behave as if it has.

Because you build these things one interaction at a time.

When you’re the person in front of them, you’re all people. If they’re a tourist, you represent the entire city of Seattle. You have an opportunity to expand and rewrite their estimation of what all Seattleites do. If you’re a young Asian man or middle-aged brunette woman, in their mind in that moment and for better or worse, you’re every young Asian man or middle-aged brunette who ever lived. Or at least, you’re the latest in a long line, and you’re expanding their definitions.

Look at you go.