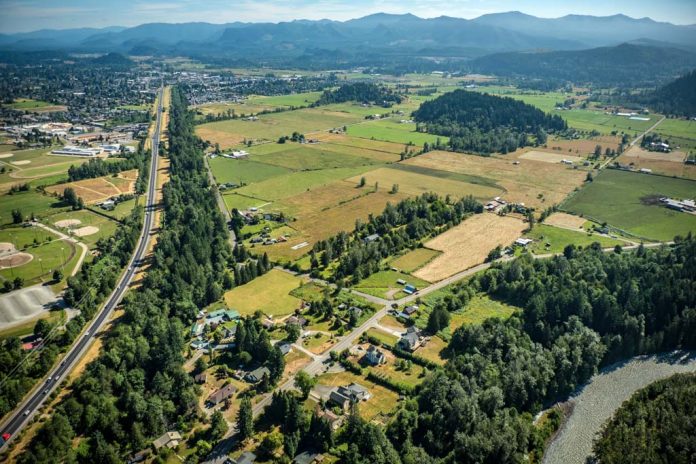 Last month we gave readers of The Urbanist a preview of Futurewise’s 2020 legislative agenda. This month we’re going to do an overview of another critical area of our work: our legal agenda. Futurewise’s staff attorney, Tim Trohihomivich, Director of Planning and Law, has been with the organization for nearly twenty years and has led our legal efforts to fight sprawl and protect farms, forests and water resources in every county in the state.

In 2020, we’re taking three new appeals that will protect farmland and fight sprawl east and west of the Cascade mountains, as well as continuing our work in six other appeals. Here’s what’s coming down the pike.

Futurewise has appealed an urban growth area (UGA) expansion by Benton County that would add 279 acres to the city of Kennewick for industrial lands. This expansion is the first south of I-82 and one of our top concerns is that if this expansion is approved, we could expect to see even greater expansion and conversion of agricultural lands. Futurewise won an appeal over a UGA expansion in the same area in 2014 and we hope to have the same success this time around.

Futurewise has raised two main concerns about this expansion. The first is that this UGA expansion is not necessary. The City of Kennewick’s own industrial land analysis documented that there is enough land in this part of Benton County to serve industrial needs for the next 20 years (the criteria for a UGA expansion rests on whether or not the current land can serve the needs of the community for the next twenty years). The other major issue is that there are no urban public facilities in the area covered by the UGA expansion.

Part of the reason Washington has a Growth Management Act is to save money for taxpayers and rate payers by focusing growth where services already existing. The City of Kennewick has existing industrial lands that are vacant and already served by public facilities. We would much rather see these lands redeveloped rather than expanding the UGA. Finally, the area has been identified by the Washington Department of Fish and Wildlife as important wildlife habitat.

All in all, we believe this UGA expansion is unnecessary, not served by public facilities and will pave over important fish and wildlife habitat. We filed the appeal in early February and expect a decision by the end of the year.

In 2019, Thurston County approved an update to their comprehensive plan. While the new comprehensive plan includes some big improvements, unfortunately the plan didn’t consider at all the designation of agricultural lands of long-term commercial significance. Futurewise considered this to be a major drawback of the plan as Thurston County has the second lowest percentage of protected farmland of all counties in Washington.

Thurston County has a large farming industry–in fact, the Census of Agriculture determined that in 2016, the county had 62,000 acres of farmland. However, just 15,878 acres of that farmland is protected from development. That means that land is vulnerable to be sold and redeveloped, threatening our food systems and exacerbating suburban sprawl.

The issue around designation dates back to Thurston County’s original comprehensive plan which determined that designated agricultural lands had to have prime agricultural soils. However, the county did not consider about half of eligible soil under this designation, leaving tens of thousands of acres unprotected. The eight year update passed last year was supposed to revisit the designation issue but did not do so. The plan also did not take measures that their own studies recommended to protect fish and wildlife habitat.

Futurewise has reached a preliminary settlement with Thurston County in which the county has agreed to study the agricultural lands policies. Futurewise has stayed our case for now and we’ll revisit this case at the end of the year.

Futurewise is partnering with Friends of the Sammammish Valley to file an appeal of the recently passed King County wineries, breweries and distilleries ordinance.

The ordinance was passed last year and was rooted in concerns the County was facing over how to manage tasting rooms and free-standing facilities that sell wine and beer in the Sammammish Valley. While the ordinance is better that what was originally proposed, Futurewise still has concerns about the impacts that these facilities have on agricultural lands, water resources and fish and wildlife habitat.

During public comment, many farmers testified with concerns about storm runoff, increased traffic and the threat of public trespassing onto private farms. Additionally, agricultural lands in east King County are already facing immense price pressure and farmers are concerned about speculators buying land for tasting rooms and driving up land prices to make the land inaccessible to farmers.

In addition to the three new appeals listed above, we’re continuing our legal work in Clark County, Spokane County, Ferry County, and Okanogan County to protect farms, forests and water resources from urban sprawl. Stay up-to-date with our legal work by tuning in to our monthly #TimTalk Facebook chats with Futurewise Director of Planning and Law, Tim Trohimovich.