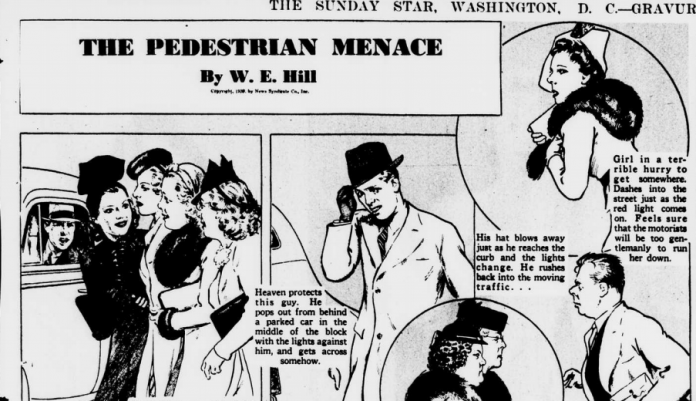 Christmas Eve 1939 in Washington, D.C. nestled within the back pages of the then Sunday Star, an illustration went to war on behalf of motorists. “The Pedestrian Menace” by W.E. Hill, depicted an assortment of motley pedestrians and the trouble that they supposedly caused to drivers.

Despite being published on the night before Christmas, the illustrations have no good cheer. Instead, they are full of extraordinary bad temper towards others by Hill. The pedestrian archetypes depicted as being part of this “menace” included alcoholics, those with glasses, children, and with a particular virulence, women.

It is this last section that of women, whom Hill characterizes with particular consternation. The younger women are too aloof and erratic, whereas their elderly counterparts are deliberately dawdling. Either-way, each of these different female generations are shown as out of sync with the correct rational approach that the male motorist is shown to represent.

Towards younger females on foot, the hint of a real animosity is reflected in an annotation to the illustration featuring a “girl,” who believes “that the motorists will be too gen-tlemanly [sic] to run her down.” With this, Hill callously floats the idea that potentially injuring or even killing female pedestrians is somehow justified.

This misogyny is also depicted in an earlier panel of “The Pedestrian Menace,” which displays a gaggle of gossiping young female pedestrians flouting traffic regulations to the dismay of an incensed male motorist.

The furious motorist is smartly attired in order to give the impression that this is an important gentleman whose valuable time is being encroached upon by these women. This is a recurring theme within Hill’s illustrations, which became gradually more sinister over the decade of the 1930’s.

The older pedestrian women meanwhile are dismissed contemptuously as “slow pokes”, who get in the way of motorists as they amble over the road. They have haughty expressions on their face and act in a pompous manner. In Hill’s words, “They won’t hurry.”

There is no understanding provided by Hill about any health conditions or mobility issues that the elderly women may have but simply ageist jeering about their plodding pace. Indeed, the senior citizens are seemingly regarded by Hill as just roadblocks to the motorist.

Underlying Hill’s illustration is the assumption of that epoch, that motorists belonged at the top of the urban hierarchy and as historian Peter Norton notes, those who got about by their humble feet, were to be subservient to them. Hill’s negative portrayals of pedestrians might be particularly venomous but they were part of wider attitudes within society.

This pedestrian problem has been detailed by Norton in the works “Four Paradigms: Traffic Safety in the Twentieth-Century United States” in the journal of Technology and Culture, (2015) and also “Persistent Pedestrianism: Urban Walking in Motor Age America, 1920s-1960s”, Urban History, (2019).

In both of these academic articles, Norton argues that throughout the era of the Great Depression pedestrians were viewed as a hazard. It certainly seems that Hill regarded particular pedestrians as a suitable target, to the point of excusing harm to them.

Several years before “The Pedestrian Menace”, Hill had depicted elderly women as a problem for motorists in another illustration from September 16th, 1934, entitled “The Nervous Driver”. The focus for this illustration more widely on the irrational tendencies that different motorists might have, about murderers amongst other things.

Nonetheless, one of these panels is quite different to the rest, the minute it is a female pedestrian, the motorist’s otherwise irrational concerns are portrayed as now legitimate. This is because of Hill’s seeming fixation that female pedestrians cannot understand traffic rules.

Two archetypes that Norton has picked up on more generally, “the jaywalker (or undisciplined pedestrian)” as well as “the nut behind the wheel (the reckless driver)” are featured by Hill, who actually uses the word “nuts” within the illustration.

In this instance however, the former excuses the behaviour of the latter. Yes, the motorist goes visibly apoplectic with rage but this is only, Hill explains, because an elderly woman and the young girl she is escorting are taking seemingly forever to cross the road. Apparently, in Hill’s eyes it was reasonable to go ballistic at this slight infraction.

Thus, the rules seem to change for Hill with the variant of gender. Norton highlights in “Four Paradigms” that motorists could be idealized as chivalrous and reasonable. For Hill, women walkers and especially the elderly were taking liberties. A further one of Hill’s illustrations would resurface this obsession on June 25th of 1939.

“This Age of Hurry” seems to focus on mostly trivial matters of romantic crushes and sunbathing. Once again however the figure of the female pedestrian veers its head and Hill takes on a rather nastier tone. Two young women crossing the street are deemed as reckless and thoughtless. “They figure if the driver of a car sees you he won’t mow you down.”

Hill’s spiteful tone again is that these are female pedestrians intruding on an angry and frustrated male driver’s time. The sentiment that would be repeated in “The Pedestrian Menace” is that the motorist would be perfectly legitimate to simply plough into the women and that the restraint of the driver in not doing so, should be praised.

By the time of “The Pedestrian Menace”, Hill’s bigotry towards pedestrians has gone up a gear in intensity. Despite this, although the illustration is very intentionally from the point of view of the motorist, the grievances of the pedestrians are perhaps more accidentally shown as well. Key to this is the theme of “space”, something that Norton notes was a big debate at the time within the wider cityscape.

One rage filled altercation between motorists and those on foot is featured on the second panel directly down. A furious bespectacled and agitated pedestrian appears wielding an umbrella, which in Hill’s time had a disturbing past and still retains some contention in our present period.

Hill’s brolly brandisher rants to a motorist of a formidable looking vehicle that they (the motorist), “Think [sic] you own the whole road, don’t you, you big bozo!”

The motorist is equally annoyed; however, this is by contrast presented as simply a righteous self-defense response to the irrational pedestrian. The motorist’s respectable anger is reflected by his composure in the face of this belligerence, as he protects the charmingly attired and meek woman next to him in a patrician fashion.

Less malicious than the bespectacled man but still represented as dangerous are two awkward young men in the upper panelsm who are both walking in and out of traffic. In the lower panels meanwhile, there is a roller-skating child, and a “cheerful drunk” ambling around obliviously in an inebriated fashion.

This spectacle fits in with the image that Norton’s “Four Paradigms” points out, the mature motorist vs. the immature non-motorist, the latter of whom lacks station in life or rather a station-wagon. In this context, what Hill is doing is actually quite insidious; they are lending the impression that should an accident occur, it would be the fault of those on foot. It is almost a form of civic propaganda.

Despite these pedestrian antics, it is the impressive automobiles that literally dominate the landscape of the illustration. Nowhere is this more the case than on the very last panel. This depicts a group of miserable pedestrians being prevented from crossing the street by an ostentatious vehicle. Yet, Hill’s sympathy isn’t with the downtrodden “bevy”, but with the motorists who have the hardship of having to drive past their moody scowls.

As Norton reflects in “Persistent Pedestrianism”, some pedestrians felt they were being pushed further and further out of the way by reckless drivers. This seems very relevant particularly to the “Pedestrian Menace” where the cars are spacious, with just the front part of the car coming up to the waist level of the adult pedestrians.

Hill thus picks up the real crux of the matter and then misses the point completely. Both pedestrians and motorists may both sometimes act out of order indeed. However, rather than exploring the different perspectives that each group might have and how a better compromise might be reached, Hill rushes completely to lambast the pedestrians in a one-sided fashion.

In Hill’s view, pedestrians just need to cheer up and make way for the motorists. This dehumanizing attitude towards pedestrians is something that Norton’s “Four Paradigms” picks up on keenly as a wider expectation. Hill justifies their hatred on the basis that the pedestrians are apparently rule breakers. However, there is never the consideration by them that the motorists might do likewise.

In their summing up last image, Hill clearly shows their bias by depicting amongst the pedestrians, a thug puffing on a cigarette and what looks like a gangster style goon at the very back. This caricature helps Hill to finally cement the pedestrians as a collective and not just individual problem.

More recently, automobiles are now being deployed in Washington to demonstrate against systematic problems as Benjamin Wofford of the Washingtonian notes. Despite this, they also continue to have reactionary ends, something no doubt that W.E. Hill would have approved of. 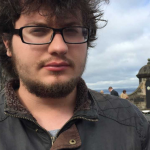 Joseph Hayes is strongly interested in the intersection between mental health and technology and has written for a variety of websites including Atlas Obscura, The Smithsonian and Jstor Daily.