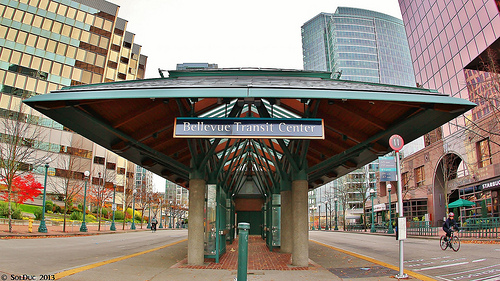 On March 25, Sound Transit held an open house for the Downtown Bellevue Segment of East Link. This segment covers everything north of Main Street and west of 120th Ave NE, including the Bellevue Transit Center and Hospital stations. The Bellevue Transit Center station, located on the south side of NE 6th St between 110th Ave NE and 112th Ave NE, will serve downtown Bellevue. The station design has evolved considerably since last spring’s open house. In response to public feedback, Sound Transit changed the station’s layout to include three different canopies on each side, separated by twenty-foot gaps. With the new layout, riders will be sheltered from the elements from the moment they enter the platform until the moment they board their train. A large umbrella-like canopy will be installed at the west entrance of the station as well.

The presenters pointed out that there will be some empty space above the tunnel portal and below the west entrance plaza, which Sound Transit plans to use for art. The large space offers the potential for a dramatic, iconic art installation, that could even become a symbol of Bellevue over time.

Finally, the station will be designed to maximize growth on an adjacent parcel, currently owned by King County Metro. The parcel is currently zoned for buildings up to 200 feet high, or about 20 floors. Fire walls along the station boundary will allow the construction of such a building directly adjacent to the station, without needing any setbacks.

Train-to-bus connections will require a walk across 110th Ave NE to the Bellevue Transit Center. At the 30% design open house, several people suggested a tunnel crossing between the station’s mezzanine level and the Bellevue Transit Center platform, allowing riders to connect between trains and buses without crossing traffic. Such a crossing would be cost-prohibitive for the time being. However, I did urge Sound Transit to design the mezzanine level so that a pedestrian tunnel could be added later.

The Hospital station will be located on the north side of NE 8th St and along the alignment of the old BNSF right-of-way. It will serve Overlake Hospital Medical Center and adjacent medical facilities, as well as the Wilburton and Lake Bellevue neighborhoods. To help transit riders reach the hospital more quickly and efficiently, Sound Transit will build a path to link the north end of the platform with 116th Ave NE, passing just behind the Design Market strip mall. The small loop in front of the station will be used for passenger drop-off and pick-up as well as Metro’s Access Transportation paratransit service. The RapidRide B Line stops on NE 8th St will be moved to be right in front of the station; along with a new crosswalk under the light rail tracks, this will provide decent train-to-bus connections. The station platform will also feature windshields to block out southern winds.

The station construction will involve the daylighting of Sturtevant Creek, which links Lake Bellevue and Mercer Slough. The creek will run under the station, and a small bridge will connect the station entrance with the path to 116th Ave NE.