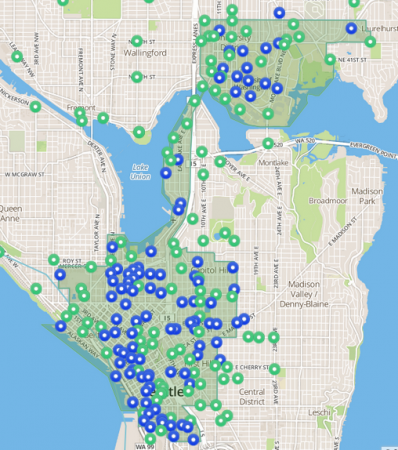 It’s official: the Puget Sound Bike Share (PSBS) will launch in 2014! PSBS’s primary vendor Alta Bicycle Share has teamed up with D8 Technologies. D8 will provide Alta with the necessary software to run the docking stations and bikes. Alta will be responsible for delivering 500 bikes and 50 docking stations for Phase I of the system. When we consider what the launch plan for docking stations, we should look at successful bike share programs like Washington, D.C., New York City, and London for best practices. Each of these systems distribute their docking stations in a fairly balanced manner across city cores. Instead of over-concentrating docking stations (except in a few instances) in city cores and corridors, the stations are spread out to provide riders with many options and ease of access. Like transit riders, cyclists are only willing to walk a few blocks in any direction to and from a docking station. This means that docking stations need to be in residential heavy areas too, not just primary activity centers. Where docking stations are highly popular, the bike share provider simply provides additional docking ports at a station. All of this is trial and error, of course. The Capitol Bikeshare program has been a constantly changing system since its inception. Planners have repeatedly recalibrated the system based upon data, demand, and comments. I expect that PSBS will do the same. But we want to strike the right balance on Day One so that we have a vibrant and well used bike share system from the beginning. Doing so will help make the case for expansion sooner, rather than later, much easier. So please be sure to provide your feedback to PSBS!