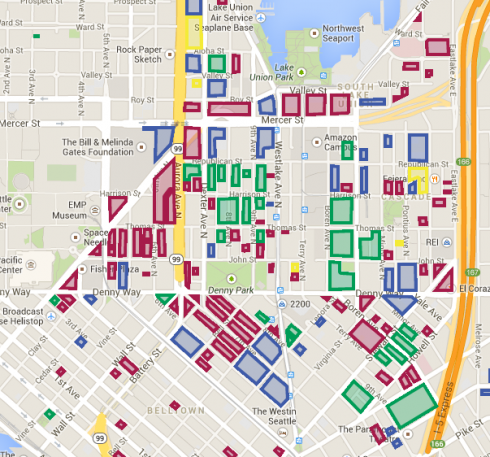 It’s been only three months since I first wrote about A Rapidly Changing Seattle. In that article, I highlighted the amazing amount of development taking place in Seattle and the city’s capacity for growth. Since then, new development applications have been accelerating at breakneck speeds, particularly in the central portion of the city. For this article, I want to focus on the areas just north of Downtown.

As you can see in the map above, dozens of projects are currently in design or under construction in this area, with new project proposals heavily focused in the areas of South Lake Union and the Denny Triangle. Since January, South Lake Union and the Denny Triangle have had a respective total of 11 and 7 new, large-scale project proposals. This continued and increasing building boom represents great things to come for the city: additional opportunity for jobs and housing, increased tax revenue, further neighborhood activation, and enhancement of the public realm and overall urban form.

However, the well is running dry in the South Lake Union Urban Center. If the pace of development keeps up, new building will have to go elsewhere in just a few short years.

South Lake Union is reaching a point where new development applications will slow down. Aside from a dozen or so sites, there aren’t many large and easily developable sites remaining. So what does that mean?

More below the jump. People generally imagine a sea of parking lots and rundown buildings when they think of the Denny Triangle. Development interest in the neighborhood really began to change a few years ago when office buildings around Whole Foods (spurred on from South Lake Union) and skyscrapers like Aspira sprung up. Two areas that have remained essentially untouched are properties located along 7th Ave (between Denny and Blanchard) and Boren Ave (between Denny and Stewart). Clearly, it’s only a matter of time before these areas will be developed, but at least for the interim, the neighborhood is saturated with many other large development projects. The Denny Triangle is unique because it has Downtown-like zoning, which permits the construction of skyscrapers (a development right previously denied to South Lake Union until 2013). While some of the undeveloped parcels appear small, they have high development capacity potential because of the neighborhood’s generous height limits. And luckily, many of the developers are capitalizing on that zoning capacity. The Denny Triangle currently has about a dozen skyscraper projects in design or under construction.

Two areas of the neighborhood are beginning to fill in, which is primarily occurring along corridors of Stewart St and Lenora St. The largest future tenant of the Denny Triangle will be Amazon.com, which seems to have an extraordinary appetite for new office space. Amazon has anchored its corporate headquarters in 3 skyscraper towers with a combined total of over 3 million square feet.

Of course, it’s not just Amazon that has taken an interest in the Denny Triangle. Institutions like Cornish College of the Arts, Greyhound Bus Lines, and other long-time property owners have decided that it’s time to redevelop their assets by reaching for the skies. Cornish is a particularly interesting case because the campus has been disjointed with offsite student housing in former motels along 7th Ave. However, the college has chosen to consolidate by proposing an 18-story student dormitory adjacent to its primary educational buildings.

Changes are definitely on the way for the Denny Triangle, but it has a longer way to go before it approaches full buildout like South Lake Union. Despite its popularity as a destination and place to live, the development capacity of Uptown is easy to forget. New development has been meager over the past few years, and when it has occurred it’s been focused in very specific areas. Much of the paltry growth is likely due to access and monumental infrastructure construction. The SR 99 portal and Mercer St construction have constantly modified access to the surrounding streets, posing a serious challenge to residents, visitors, and workers. Not to mention, the massive staging areas for the projects are fairly unattractive sights. One could presume that this has combined to discourage development north of John St. (in the eastern half), in particular, while seriously hampering interest in properties east and north of the Seattle Center.

My gut tells me that most of the new development coming forward will occur in the eastern half of Uptown, especially once the SR 99 construction wraps up in 2016(?). Why? Developers are attracted to areas where there are already nodes of development activity. Add to that the proximity to employers in South Lake Union and the Denny Triangle, and it seems like a natural progression of revitalization.

Indeed, some developers have already jumped into the game like those of an ambitious skyscraper project called 600 Wall St (technically in the Denny Triangle). The project recently went through Early Design Guidance for Design Review and consists of a 38-story, modern flat iron skyscraper located on the small triangle lot between Denny Way, Wall St, and 6th Ave. Don’t expect those type of developments in Uptown; the Uptown Urban Center is zoned for a maximum of 85 feet (except for the Space Needle, obviously!)

In short, South Lake Union is definitely a big driver for development right now and will continue to be for a few more years. Soon, though, we’ll be talking about the next “new thing” in town. And where is that? Perhaps the Denny Triangle and Uptown. If you’re interested in large scale projects throughout Seattle, check out the Development in Seattle map.