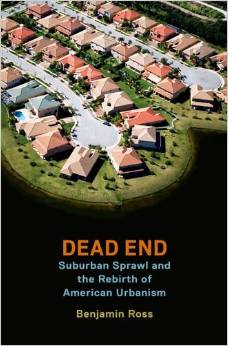 Many of you probably know that we have a weekly Tuesday meeting at Roy Street Coffee & Tea. But this week is different with a much better event in store for you on Wednesday (tomorrow); so consider tonight’s meeting cancelled. As we mentioned last week, Ben Ross will be in town to lead a discussion on urbanism and his book Dead End: Suburban Sprawl and the Rebirth of American Urbanism. Even The Stranger thinks you should be excited about this, or else.

Ben Ross writes for Greater Greater Washington, which covers urban topics for the Washington, D.C. metropolitan area. His talk will take place at The Elliott Bay Book Company beginning at 7pm. Feel free to drop by earlier though as many of us will be hanging out in advance. Afterward, we’ll have a follow-up happy hour and time for folks to mingle. So a bit about the event:

Co-presented with FRIENDS OF TRANSIT. Transit advocate Ben Ross has been the leader of the largest grass roots mass transit advocacy organization in the U.S. (Maryland’s Action Committee) for fifteen years. Ross travels to Seattle today to speak about his book, Dead End: Suburban Sprawl and the Rebirth of American Urbanism (Oxford University Press). Arguing that sprawl is much more than bad architecture and sloppy planning, he identifies smart growth, sustainability, transportation, and affordable housing as interrelated. The two keys to creating better places to live are expansion of rail transit and a more genuinely democratic oversight of land use.

If you need a reminder, be sure to add it to your e-calendar. We hope to see you tomorrow!

The Elliott Bay Book Company
Wednesday, 7 May
7pm-8pm
1521 10th Ave, Seattle
The event is free and open to the public