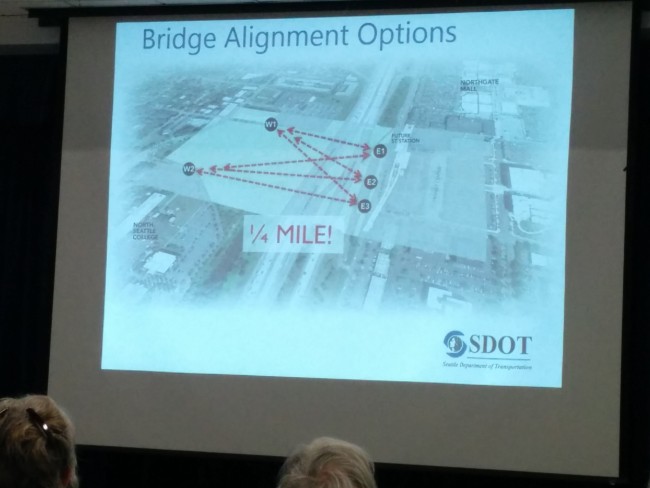 Yesterday, the Seattle Department of Transportation (SDOT) held an open house on a potential pedestrian bridge for Northgate. The bridge would serve residents on both sides of I-5 at Northgate, but with the primary purpose of connecting pedestrians and cyclists west of Northgate to the future light rail station. The open house provided the public an opportunity to discuss all of the design options on the table with SDOT.

SDOT outlined several criteria in deciding what a final bridge design should incorporate, but three in particular were emphasized for public comment:

Many reasons were given to justify the need for this bridge, including long-term demand in the community for a new connection across the freeway, expanding the train station walk- and bike-sheds, and boosting the usefulness of the planned bicycle Greenway along 100th Street.

Three model bridges were provided displaying each of the designs under consideration for the bridge span (as seen below): a tube shaped bridge, a cable supported bridge, and an arch supported bridge. The bridge designs incorporate features to deter items (or persons) from being dropped from the bridge and create a visually interesting structure internally and externally. SDOT and Sound Transit have secured $10m of the $25m required to complete the project. The two agencies have teamed up to seek an additional $15m from the Federal government under the USDOT’s TIGER grant program. If the grant funding effort fails, SDOT and Sound Transit say that there are a number of alternative funding avenues being considered, including guaranteed funding attached to a future infrastructure funding levy (presumably the next Bridging the Gap measure).

Support at this event appeared to be strongly in favor of this project. However, there were some concerns raised about connecting infrastructure like the Greenway (currently unfunded), safety at the Meridian Avenue N crossing (west of the bridge and entirely unprotected), and the potential increase in parking challenges if people choose to park on the west side of the freeway and then walk to the station.

Public comment is encouraged on the project with final comments due by June 16th. You can contact the project lead, Art Brochet, directly via e-mail.