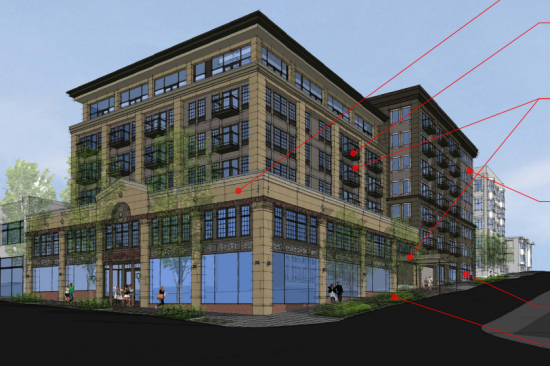 New views: Union Street will soon be under construction for an enhanced access to the waterfront from First Avenue. We look forward to the new lookout and access (for a primer on changes to come, see our previous report on the waterfront).

Ding dong Broad Street is dead: One of the few positive outcomes from the Viaduct is the closure of Broad Street. Remember those small sidewalkss and nasty traffic? Gone. The good news is that a superior street grid for all users is on the way. Broad is now closed between Fifth Avenue and Ninth Avenue.

Nail in the coffin: San Francisco’s voters took it upon themselves to grant veto authority for residents on waterfront development projects. Any future projects by the Port of San Francisco on the waterfront will be subject to a public vote if buildings exceed lowrise heights. Planners be damned.

Doin’ it for the public: Amazon.com wants you to know that you are very welcome to use their future public space. Do it! If you’re unfamiliar with the Denny Triangle towers going up, you should be. A brand new public park and retail amenities will be delivered for both Amazon employees and the public.

$$ for biking and more: The French government is mulling over the idea of paying people to bike. The government feels that the cost is probably worth the savings in terms of health, road expansion, and environmental conservation. Protected bike lanes provide more than safety, they induce new cyclists. In Citi Bike’s first year, every cyclist got home safely without a helmet; no surprise there. Toronto extends the sidewalk which becomes an accidental bike lane. The Federal government has officially designated a US Bike Route in Washington state. And, the Seattle Bike Blog sheds a little more light on the Northgate Pedestrian Bridge options in addition to our own story.

Council action this week: The City Council decided to expand the process for developing microhousing regulations by creating an advisory group for foes and doves (see Owen’s take on it). Meanwhile, the Council did move the North Rainier Rezone forward with Harrell’s low heights amendment getting quashed (Owen opines on it and advocates for expansion of the rezone). But more importantly, the City Council voted to raise the minimum wage to $15/hr, and boy was that meeting raucous.

Innovation in station design: Gizmodo swoons over five cool ideas for intercity railway stations in the US, Curbed highlights the complex and future Union Station in Los Angeles, and Streetsblog USA tells us why Milwaukee is looking to create a bi-level platform station.

Improvement for buses: It’s not exactly new news, but Community Transit will get to add new service over the next few years. The agency talked with KING 5 about their growing pains. SDOT will complete the Belltown-Uptown Trolley Electrification project soon, which will mean better reliability for buses and more direct routing. And Metro releases their basis for a bi-directional Columbia Street as a new path to West Seattle when the Viaduct comes down.

All about the design: CHS gushes about the new Dunn Automotive building breaking ground and argues that the historic preservation effort is commendable. Paris may not like modern design, but they’re getting this funky glass dome addition in the courtyard of an historic Haussmann-era complex. Sweden plans to relocate an entire town and develop the new town with revolutionary design. We’re not exactly fans of Walmart or the boring replica skyscrapers in China, but this new shopping center Walmart is definitely noteworthy. Genoa will deliver some cool new classrooms, which makes great infill. Daniel Libeskind creates a new skyscraper in Manila that will definitely be a talking point. And Manhattan is looking to construct some serious storm defense forces along the Lower Manhattan waterfront. The good news for the public is even better park space.

To cut or not to cut: King County Council Member Rod Dembowski led a coup with Republicans on the transportation committee. Dembowski wants to delay planned cuts to Metro after the initial September service cut round. Seattle Transit Blog opines about tentatively supporting the effort for additional efficiencies, but remains skeptical about the long-term vitality of Metro if actual service cuts are delayed further.

Median building age: This sweet mapping service lets you look block by block at a whole range of data like median building age, density of businesses, granularity of blocks, and more. City Lab has an interesting set of maps on how Detroit may deal with its blight, or at least they have an idea of where it its. And since we love maps, next time you visit Seatac Airport, you can drop by Metsker Maps in Concourse B!

Take a walk underground: Sound Transit shares a walk through the new light rail tunnel between the UW and Capitol Hill, check out the video.